This afternoon, I went on an #Oathgate protest march with the two friends with whom I had gone  protesting on Wednesday evening.  After marching for a couple of hours, the procession which had began in Wan Chai reached Central; at which point some of the thousands of protesters congregated outside the Hong Kong Court of Final Appeal building while another group marched on to the Liason Office at Sai Wan.

Initially, my two friends and I opted to join the assembly outside the Court of Final Appeal.  But after one of my friends volunteered to march on to Sai Wan, I decided to join him on a rally that was initially exhilarating -- particularly in terms of there being far greater numbers out today than on Wednesday evening (no doubt because Wednesday's had been announced pretty much at the last minute) -- but then turned frustrating (because the police blocked our path when we were so very close to our destination at Sai Wan), scary (when the cops pulled out the "Stop Charging or We Use Force" warning banners which I'd not seen since the end of Occupy back in December 2014) and then aggravating (because even when the powers-that-be seemed to want the protesters to leave, they made it difficult for us by doing such as shutting down service to the nearest MTR station to Sai Wan).

As it was, I finally only left what had turned into an Occupy-style protest area at around 10:45pm by foot, at least to the next nearest MTR station (over at Sheung Wan).  The following are some photos I took over the evening after leaving the Court of Final Appeal that I trust will give people some idea of the size of today's protest crowd along with some sense of what it was to be in it:- 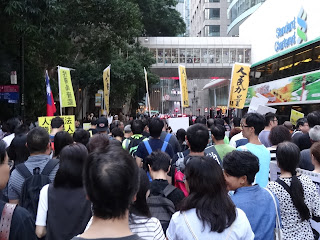 Marching along Queen's Road Central with a crowd in good cheer 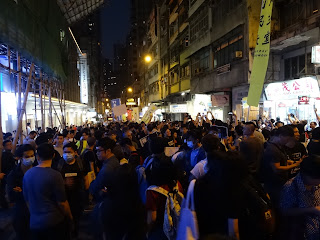 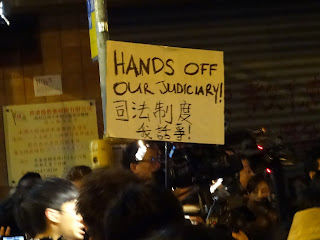 A message for Beijing -- written in English and traditional Chinese 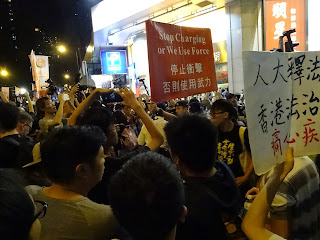 Shortly after 7pm, just meters away from the Liason Office,
the police warning banners were hosted up 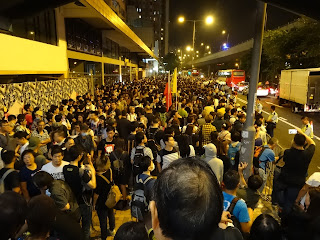 Waiting for more of road to be opened up to protesters
-- or, at least, the sidewalk in front of the Liason Office 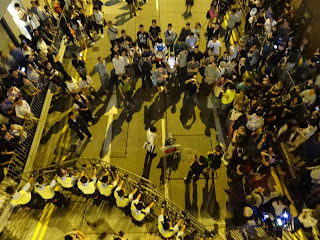 Even after people were pepper sprayed at the front of the rally,
the likes of Chu Hoi Dick were preaching and keeping people
calm a few meters from the frontline 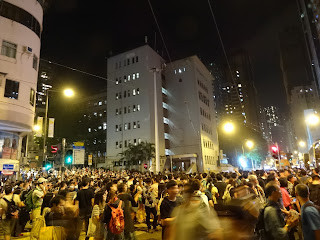 Since the police wouldn't let us proceed to the Liason Office,
people retreated to the section of Des Voeux Road
that's one block away and occupied it 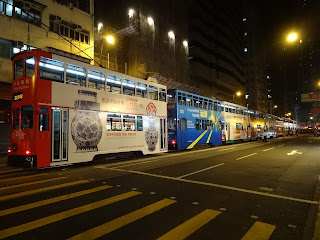 One consequence of this move was that more than 20 trams
ended up being unable to move and were abandoned! 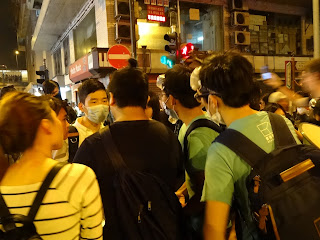 In the midst of it all, Demosisto leaders and their allies conferred
(Note: it was great to see the likes of Joshua Wong and "Long Hair"
Leung Kwok Hung leading from the front rather than rear) 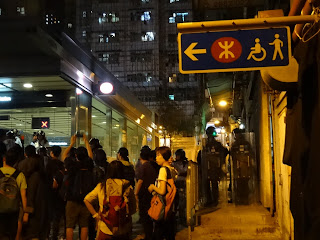 Riot police and the MTR collude to prevent people from
getting into and using Sai Ying Pun MTR station
To be continued...
Posted by YTSL at 11:59 PM