A less gray outlook the day after 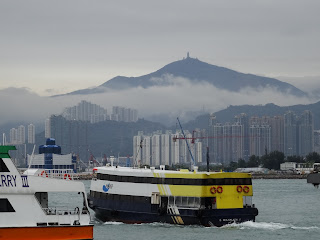 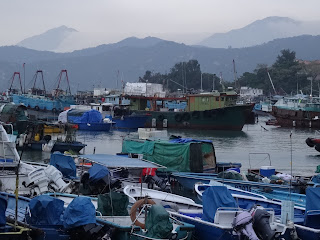 View of mist covered Lantau mountains
from Cheung Chau's main praya
Things feel better after a good night's sleep.  That's something I've heard more than once, and it's something that I often do think is really true.  In any case, after having managed a full complement of shut-eye last night, I'm feeling more able to live in a world in which Donald Trump is president of its most powerful nation (even while not liking the prospect one bit).  At the very least, as I told more than one friend today, we're (still) alive and should count our blessings since we do have quite a bit to be thankful for.

Among the things I'm happy about is that my German friend (who I met over the course of a Tai Lam Country Park hike the first year that I lived in Hong Kong, and spent more than seven years in the Big Lychee before returning to her home country) is back in Hong Kong again for a two week visit, and that I've been able to spend quite a bit of time with her doing such as taking part in The Gallery Walk for Charity last week and attending the wonderful Edgar Meyer + CCOHK concert this past Tuesday evening.  And despite today being on the gray and drizzly side, we went ahead and had an enjoyable time strolling about on Cheung Chau for much of the afternoon (and having a satisfying dinner at Hong Kee -- whose signs now identify it as a regular "restaurant" rather than unusual "respaurant").
Amazingly, today's temperatures were in the 17-19 degree Celsius (around 62 to 66 degrees Fahrenheit) range; quite a bit cooler than just a couple of days ago.  Funny but true: my German friend and I got quite a bit of amusement from checking out what other people were wearing; with some folks dressing like winter is already upon us (with knee length winter coats or down jackets on) but at least one hardy soul electing to walk around in just singlet, shorts and short socks along with shoes!  (For the record: I opted for something in between -- t-shirt, cargo pants, light fleece jacket and shoes with socks rather than my usual summer sandals.)
So even if the sun wasn't shining much today, my general outlook has improved.  I tell myself that one man shouldn't ruin my day, never mind four years -- even if he is the president of a country with more than enough nuclear weapons to destroy the world! (And ditto with the president of a neighboring country that seems unable -- or is it more a case of being unwilling? -- to understand Hong Kongers and deal with it in a way that actually would be conducive to peace in the region.)
Posted by YTSL at 11:59 PM

These photos and text epitomize why I love Hong Kong: a bustling port where boats, ferries, the sea and background mountains transcend current events - and are also capable of therapeutically lifting a person's "gray outlook."