The joys of sashimi, and more, in Japan! 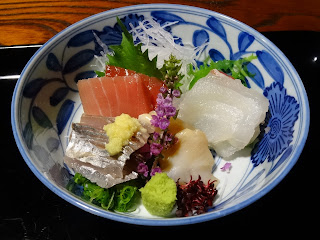 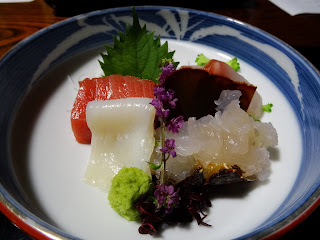 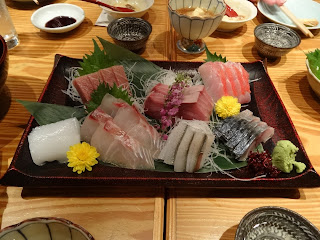 The assorted sashimi selection on my most
recent visit to Yoyogi-Uehara's Sasagin
On the ferry ride today to our meet-up meeting point for today's beach clean-up, I found myself sitting next to a friend who doesn't like eating sushi and another friend who revealed that while she was okay with raw fish, she doesn't particularly care to eat a lot of other raw foods that the Japanese like, including raw horsemeat but also raw eggs.  While I share the latter's distaste for raw horsemeat (and, for that matter, cooked horsemeat as well -- more for ethical than gustatory reasons though), I absolutely love eating sushi -- and, for that matter, sashimi too along with, actually, raw egg (with sukiyaki, and also poured over a bowl of rice)!
As it so happened, I didn't have any sukiyaki on my most recent Japan trip -- but I did have a bowl of rice mixed with raw egg (that I ate with incredibly deliciously fatty chunks of wagyu beef steak!) on two occasions, and either sashimi or sushi (or sometimes both!) every single day of the eight day visit!  And while some people might deem this state of affairs excessive, it definitely speaks to how much I really do like those foods but also how sashimi does seem to be a pretty integral part of many Japanese meals (especially feasts!).

More often served as a part of a meal rather than sushi, sashimi also looks to be preferred to sushi by a fair few people, including two from the group that I spent the bulk of this recent Japan trip with.  Although sushi remains my first love (and would -- I decided long ago -- be what I'd eat if I could choose what would be my last meal before I die), I also can see sashimi's allure; especially when the pieces are sliced by a skillful knife-wielder and are made up of such as toro (be it chutoro, o-toro or some other fattier grade of tuna), lobster (which we were lucky to have on our second evening at Gora-Kansuiro) or sanma (i.e., saury, which is a seasonal delicacy to be treasured in the fall).

And yes, we're talking here about raw seafood for the most part.  Though I have indeed also been served sashimi consisting of raw wagyu beef (good) and raw horsemeat (which, if truth be told, I thought tasted like wagyu!).  And here's confirming that often times in Japan, the sashimi comes with garnishes consisting of the leaf and -- less commonly and consequently even more of a treat -- flower of the shisho plant; things which may be even more exotic tasting and to eat to many people who haven't tried out that many types of Japanese food! ;b
Posted by YTSL at 11:59 PM