Walking thousands of steps on Lantau this Chung Yeung Festival 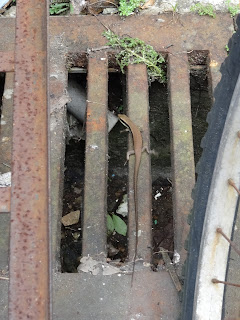 The critter spotting can start even before one gets on to
a hiking trail out in greater Mui Wo! 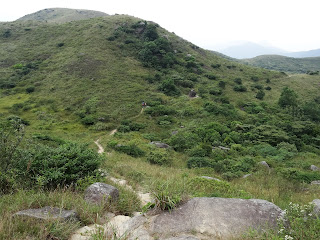 ...and just a few thousand steps uphill leads one to a place
which feels hundreds of miles away from urban Hong Kong ;b

When I returned to my apartment late last night, I was floored to find my pedometer telling me that I had walked over 24,000 steps over the course of what admittedly had been an extra long as well as pretty eventful day.  After all, I know that many people find it difficult enough to get to the 10,000 step mark that health experts say is good to reach daily and this time of the year, even on the days that I go hiking, I still tend to log less than 18,000 steps over the course of that 24 hour period.

So imagine how good it feels to discover upon returning home this evening that the Lantau Island hike a friend and I had gone on beginning down at sea level in Mui Wo up to at least past marker C7104 of the Lo Fu Tau Country Trail and more than 300 meters above sea level had helped to propel my pedometer readings to close to 27,000 steps for just today!  Which means that this weekend alone, I've already walked more than 50,000 steps -- and not always on level ground either!

This discovery made me feel better about not having reached today's original hike destination of 465-meter-high Lo Fu Tau (aka Tiger's Head) because we ran out of time.  By this, I mean that if we had gone and pressed ahead, we'd not have been able to get back down to Mui Wo -- where, ironically, I had had my best critter spotting of the day (a brown skink first spotted scampering along a lane right in the village!) -- before it got dark; and while I know of hikers who like to venture out at night, neither the friend I was out with today nor I are among that group!

As it was, the lights of some buildings had been switched on before we actually returned to greater Mui Wo today; partly because the skies had prematurely darkened in the late afternoon in a way that had made us fear that what had began as a beautifully sunny day would turn into a rainy one.  Also noticeable was how visibility decreased over the course of the day; this perhaps due to quite a few hill fires having broken out on Lantau -- no doubt as a result of certain people ending up burning more than just incense around their ancestors' graves during Chung Yeung Festival.

I remember a great Harry Harrison satirical cartoon from a few years ago showing two ancestral figures chatting while sitting on a cloud looking down at Hong Kong.  One of them happily says that his relatives burnt him a car that Chung Yeung (or maybe the similarly observed Ching Ming) and upon asking what the other what his relatives had burnt for him, got the reply: "Half of Lamma"! ;(
Posted by YTSL at 11:46 PM