In celebration of Sake Day! 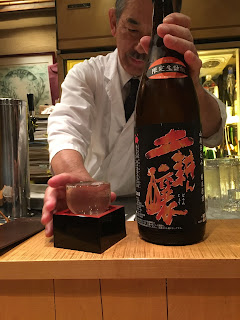 Sasagin's Narita-san can be counted on for
a generous pour of sake! ;b 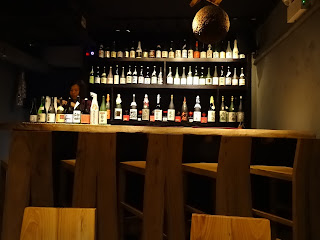 A photogenic selection of sake's on offer at Sake Beya Masu


I'm writing this blog entry before I head over to Sake Bar Ginn later this evening to celebrate Sake Day.  Since the closest thing in my life to the bar in Cheers is putting on an "all you can drink and eat" (for 3 hours or so) event tonight, I know that I won't be home until after midnight -- and definitely won't be in the mood to do any writing afterwards!


In honor of this annual event held in tribute of that wonderful alcoholic rice beverage that the Japanese actually know as nihonshu (since sake is the generic word for alcohol in Japanese), here's going ahead and confessing that even while I do regularly imbibe quite a bit of sake at Sake Bar Ginn, nihonshu is something I like to drink at a number of other establishments too (and I don't just mean Sasagin, the Tokyo sake bar where I had my first major sake revelation either!).


This is on account of, among other things, my thinking that Japanese food goes great with alcohol; and if I were to get even more specific, I'd say that sushi (and sashimi) and nihonshu go particularly well together (whereas beer would be my drink of choice when eating something like kushiage).  Consequently, I hardly ever have a sushi (and sashimi) meal without also drinking some sake; this even when I've gone and had sushi for breakfast over at Tokyo's Tsukiji market!


Now, as one might expect of someone who's favorite food in the world is sushi, the food's the main thing at most of the sushi meals I eat.  But at Uehara last Sunday, I truly believe that the omakase meal we had was made extra special by the friend I was with having decided to share a bottle of the Huchu Homare brewery's exquisite Wataribune junmai daiginjo, one of those sake that's so delicate and pure that it can taste like slightly sweet and alcoholic spring water of the highest order!


In addition, in recent years, a couple of restaurants have opened in Hong Kong that not only offer sake pairing dinners but it'd seem silly to go eat there if you don't intend to drink any nihonshu.  Ironically, on the two occasions thus far that I've been to the more celebrated Godenya, the food-- notably a seriously amazing shirako mini pie -- has stolen the show.  (Hence my thrill at having made the acquaintance of Godenya's chef and spent time hanging out with him at this year's Lan Kwai Fong Beer and Music Festival!)

On the other hand, on both of my visits thus far to Sake Beya Masu, the selection of sake made by the establishment's owner, Louis Ho, couldn't help but overshadow the food to some extent on account of it being pretty impeccable; something that's not too surprising when you realize that he's a certified sake samurai, and the Hong Kong importer of -- among other sake -- the exquisite Wataribune junmai daiginjo along with its noticeably less delicate but also still very fine (as well as significantly more affordable) junmai ginjo.

Actually, the most amazing thing about Louis' sake selection is not that all of the nihonshu on the menu at Sake Beya Masu are quality tipples but that they really do go very well with the food served.  In fact, I can vouch from experience that the sake he selected actually taste better when paired with the particular food chosen than when drank on their own; with the ones I tried tasting too strong or less balanced when I've had glasses of them without eating any food! :O
Posted by YTSL at 8:08 PM

Only had sake a few times

Hope you managed to have good sake. I myself didn't have really good sake until just a few years ago. When I finally did, it was absolutely revelatory! ;b