Up hill and down dale in urban Hong Kong 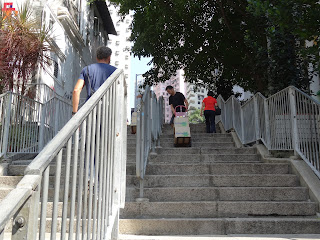 Some streets in Hong Kong are only accessible on foot 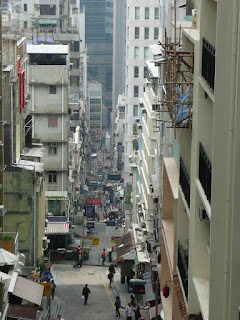 Not a car in sight despite this photo having been
taken in the heart of the city! ;b


Considering that two typhoons passed close enough to Hong Kong this week that typhoon signals were raised on a number of days, I'm actually pretty amazed that I managed to spend as much time outdoors as I did.  And while I haven't gone hiking in the Hong Kong countryside in more than a week, I still reckon that I've actually gotten in quite a bit of a workout by way of having done quite a bit of urban walking over the few days; this particularly so since one frequently finds oneself going up and down slopes -- rather than just moving about on flat land -- in these parts.


On more than one occasion, I've had a friend jokingly complain to me when I've suggested that we have a meal and/or drinks in Central or the section of Sheung Wan adjacent to it about this meaning that we have to get in a bit of hiking before and after meeting up; and this particularly when the designated restaurant or bar is located in Soho or nearby "PoHo".  But I figure that places like Little Bao and Yardbird -- not to mention For Kee and Sing Heung Yuen -- are worth the climb (along with the wait that's often required in order to snag a seat at these dining establishments)!


I'm not sure if I've mentioned this before on this blog but the first place I actually ever stayed in after moving to Hong Kong back in May 2007 was located in Soho.  And should anyone wonder: yes, I did think that it was pretty cool to be living in the same part of Hong Kong that Tony Leung Chiu Wai's Chungking Express character was shown doing -- and the film's cinematographer, Christopher Doyle, did in real life! -- and to head to work and back home daily along the Central-Mid-Levels Escalator/Travelator which I will forever associate with that 1994 Wong Kar Wai movie.  Also, even with what can seem like over-gentrification in the area, it's true enough that this part of Hong Kong still does have a particular visual charm.

Nevertheless, I have to admit to not wanting to live in this elevated section of the Big Lychee these days.  Instead, my residential preferences involve prioritizing being closer to an MTR station and this generally means that one will be on level ground closer to sea level.  And even though it's true enough that the particular area of Hong Kong which I've chosen to make my home for some nine years now -- and counting! -- is not as picturesque as these other parts of the territory, it's got enough (local) color and attractions as far as I'm concerned! ;b
Posted by YTSL at 11:59 PM

I couldn't mange to live among that many people.
Coffee is on

Is that Ladder Street? I am pretty sure the second photo is Peel Street. It would seem you were up on the foot bridge when you take that shot.

There aren't that many people in the pictures. Check the following blog post for a picture that really has a lot of people in it...
http://webs-of-significance.blogspot.hk/2014/10/encouragement-and-support-for-cause.html

You got it re the second photo being of Peel Street and taken from the footbridge over Caine Road! And you were close re the first photo but that's actually of the section of road where Bridges Street turns into Tai Ping Shan Street.

I think what one considers "picturesque" sometimes depends on where one lives. In your "Home in Kong Kong" post I thought your photo of the "tong lau" where you lived for many years is very picturesque.

Good point re "picturesque" being relative! I definitely would stop to try to take photos if 3 deer or 10 wild turkey crossed the road in front of me. Did you? ;b