Getting into the spirit of things on Halloween! 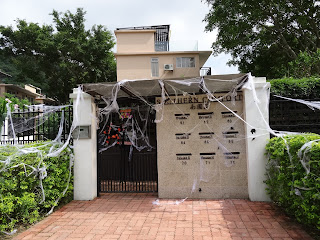 Some people really get into the spirit of things come Halloween! 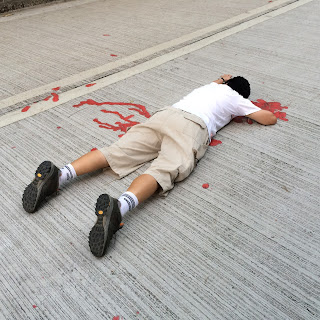 Then there are those who don't need a festive excuse
to indulge in tricks (and jokes)... ;b


This evening and also last Saturday night, I saw people out on the streets and in the MTR dressed up as ghosts, ghouls, zombies and -- more cutesily -- as pumpkins; something I've come to increasingly expect when Halloween comes along (and also the closest Saturday night before it).  But while I've been occasionally amused by those parading about in costume during this time of the year -- including, most memorably, a woman dressed up as a Na'vi from Avatar who was in the same MTR carriage as me one evening a few years back -- I've not felt much of an inclination to join in the dressing up.

And for the record: I definitely have not been inclined to do up my abode in ways that get one realizing that some people really get into the spirit of Halloween when this American festival whose popularity has spread around the world, including to Hong Kong, comes along.  However, upon coming across a patch of road that had streaks of red candle wax on it while out hiking with two friends one afternoon, something mischievous took hold of me.  More specifically, I saw the possibility of a good horror image coming out of my going and lying on it!

Interestingly, although the friends I was with and I all had an enjoyable giggle while I lay down on the fortunately very quiet, deserted road and made like Death had taken me into its embrace, one of them later had cold feet about my posting the picture on this blog.  At the very least, he suggested, wait until Halloween to share the photo.  Then people will be more likely to be amused rather than shocked, or even horrified -- and, I suppose, view the image as a comic treat rather than bad taste joke/trick! ;b
Posted by YTSL at 10:36 PM