Getting better and better at Godenya?! 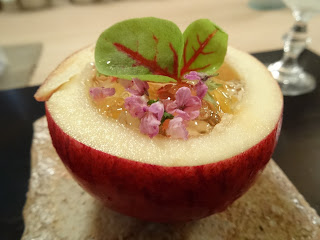 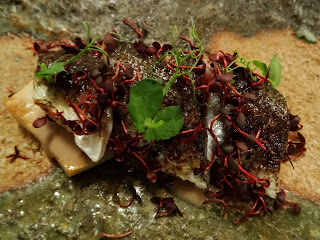 Just one of many dishes at the nine-course sake-pairing
dinner that got me moaning with pleasure! 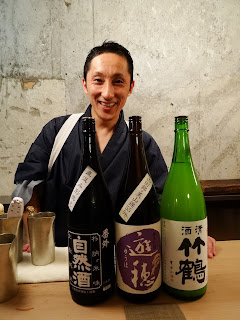 
In retrospect, I'm not sure why it took so long for me to return to dine at Godenya.  Granted that it's not easy to get seats at this dining establishment which had only eight seats in total before a private room which seats an additional four to eight guests was built fairly recently.  And it's also true enough that the price of its sake-pairing dinners ensures that it's a splurge place for me.


Perhaps there was a part of me that was afraid that the third time would be when the magic died, the way that it had been with Tenku Ryugin, the two Michelin star overseas branch of the three Michelin star Tokyo modern kaiseki restaurant that I had served up a wonderfully revelatory meal the first time I ate there; with this worry having had fuel added to it by fellow blogger bluebalu's negative review of her second visit to Godenya (after a very enjoyable first visit the same month I had been blown away by the shirako-filled mini pie there).


If so, I feel a need to apologize to the two Goshimas -- owner-sake master Shinya, and his younger chef brother -- for having harbored doubts that any dinner at Godenya would disappoint (me).  Because, in all honesty, each time I've dined there, there has come a time during the actual dinner when I get to thinking "I really want to eat here again!"; and this latest meal I had there (eight months after the previous one) turned out to be my favorite of the three I've now had there -- and might actually even be my favorite non-omakase sushi meal that I've had thus far in my life!


Here's the thing: the first time I dined at Godenya, the bar got set pretty high.  Yet the second time around, it needed just one dish -- albeit one that was incredibly delicious as well as pretty unusual -- to get me thinking even more strongly than previously that its chef was a genius.  And now, amazingly, on this most recent visit, I tasted a dish that I actually think was even better than the shirako and black truffle-filled puff pastry that had sent me to Elysium the second time I was at Godenya -- and which was just one of many that evening that literally had me moaning out loud in delight!


Actually, from start to finish this time around, there wasn't a single dish that wasn't to my liking on this seasonal menu whose flavors were excellent and also was notable for its playfulness with -- and attention to -- textures.  In addition, quite a few of them, including the first course served in an apple that contained bits of that fruit but also akagai (ark shell), ground cherry and yam in a jelly concoction, were visually stunning too.


Ironically, two of my absolute favorite dishes were the least appetizing in appearance of the eight courses.  (Indeed, I quietly confided to the friend I was with that one of them actually looked like barf...)  But the umami-loaded improvement of a risotto that was Godenya's abalone, liver and rice concoction (and course number three on this menu), and the also seriously umami-rich century egg and chestnut soup (that was course number five on the menu) more than made up in flavor what they seriously lacked in looks.


Incidentally, it was actually quite agonizing to take just small sips of that century egg and chestnut soup as a result of the spoon one was provided with to scoop the soup was on the small and dainty side.  And when I was presented with a similar sized and shaped spoon for the also very tasty butterfish, winter melon and zucchini soup -- which had also included a strip of fried burdock for textural crunch -- that made up course number seven, I rebelled and decided to drink the soup the traditional Japanese way: sans spoon and, instead, just straight out of the bowl, as if it were a cup!


One of the best things I've found about Godenya is that even while the food is absolutely fine, the atmosphere and host is actually far from stuffy.  Consequently, I felt relaxed enough to not use a utensil despite it having been provided.  Also, when I asked Goshima-san if it was okay for me to drink all of the dashi -- despite not having been provided with a spoon to consume it -- as well as just focus on eating the shishamo, shellfish and maitake mushroom showcased in course number two of this dinner, he had giggled before smilingly sharing that it was actually his favorite part of the whole dinner.


More giggles emanated from Goshima-san when I confided that the sight of the sweet potato slices encasing the cold beef and figs mix which resembled beef tartare for the fourth course's dish got me thinking of Godzilla.  Still, even while the mood was light, the food on offer at this dinner truly was no joke; with another culinary highpoint of the night being the beautifully crispy saury, softly meaty mushroom and surprisingly sweet liver sauce combination that was course number six.


Although I thought that I felt satiated after course number seven, the sudachi of the brown wheat udon soup that was course number eight was so refreshing that I not only easily devoured all of those noodles but my appetite suddenly came back -- or got considerably larger!  Consequently, I wouldn't have complained if I had been giving a larger serving of the wonderful pistachio ice cream served with a fruity sake "sauce" that was the ninth and final course of the night!


On the other hand, here's happily noting that the amounts of sake that accompanied the food were definitely on the generous side.  And while none of them really stood out so much that I'd absolutely hanker to drink them again, I do reckon that this time around, I really did appreciate the choices of sake paired with the food.  Consequently, here's listing the seven different sake served by course at this dinner:-

Good to hear that your third visit turned out to be such a success! I have booked another table for December, so let's see what the menu will be then and whether or not I'll share your (revised) opinion! :)

I'm happy to hear that you've not yet given up on Godenya! Hope you have a great meal there in December -- and do share your thoughts of that third dinner of yours there. :)