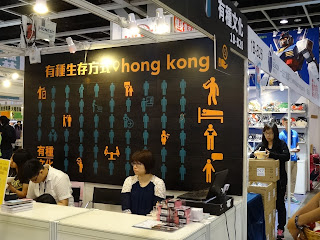 Both the political and kawaii are to be found at
this year's Hong Kong Book Fair! 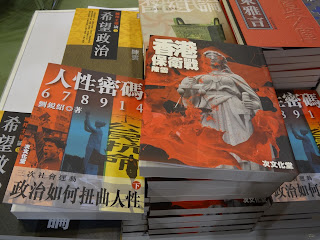 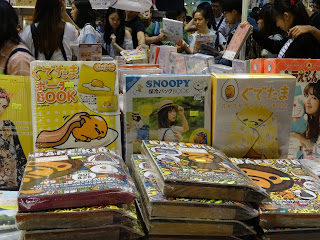 Perhaps Mainland Chinese bibliophiles could content
themselves with these works instead? ;b
Chinese martial arts literature was the designated theme of this year's Hong Kong Book Fair, with a dedicated zone for wuxia novels by the likes of the great Louis Cha (aka Jin Yong), Gu Long and Ni Kung -- many of whose works have been adapted into films such as the Swordsman trilogy, Ashes of Time, and Butterfly and Sword -- and their fellow producers of tales of martial arts rivalry, chivalry, brotherhood and such.  But when I wandered about the vast halls of the Hong Kong Convention and Exhibition Centre which hosts this mega book fair for a few days each year, I found a whole lot of tomes -- and ended up making a number of purchases -- about a range of other subjects.
What with books being strongly associated with education, it's only to be expected that there are lots of educational books on offer at the book fair; among them learning books for children, college guides and exam guides, and academic tomes (including those published by various local university presses).  Also taking lots of floor and shelf space were business books, self-help books and biographies of famous and/or successful people like Steve Jobs, Jack Welch, Sir Alex Ferguson, Hilary Clinton and, erm, Donald Trump.
Also to be expected for Hong Kong was that the vast majority of books on sale are written in Chinese.  However, the English language section of the fair actually was larger than I -- who was checking out this popular annual event for the first time ever -- expected; with quite a number of stalls that weren't set up along the designated "English Avenue" (including those of local publishers such as the Commercial Press, Joint Publishing and the University of Hong Kong Press) stocking some English as well as Chinese language tomes.
And while I wish more of them were available in English rather than "just" Chinese, I was seriously glad and heartened to see a number of books on sale at the Hong Kong book fair that couldn't be if "one country, two systems" were not (still) in place.  Among these are a collection of essays by the late Chinese premier turned reformist icon Zhao Ziyang along with various books about the Umbrella Movement, and at least one work which explicitly draws links between key events that occurred in this part of the world in 1967, 1989 and 2014.
In view of colors taking on political significance during the Umbrella Movement, it was interesting to note that the predominant colors on the covers of many of the political tomes appeared to be yellow (the color most associated with the Umbrella Movement), black (a popular color among pro-democracy protesters in Hong Kong) and red (which is traditionally associated among the Chinese with good luck and happiness but nowadays also tends to bring to mind Communist China, anger, blood(shed) and aggression).
On a lighter note: yellow also is the color of Gudetama, the lazy egg that's the kawaii character du jour here in Hong Kong.  And this being Hong Kong, Gudetama sightings also were made at the book fair along with fellow Sanrio character, Hello Kitty -- whose likeness appeared on items for sale at the stall located right next to that of an organization whose advertising references the Umbrella Movement and the "fishball revolution" along with regular Hong Konger/human activities like shopping, sleeping, travelling, "Facebooking", and reading! ;b
Posted by YTSL at 6:07 PM