Durian -- the seasonal fruit that got me flying thousands of miles to feast on! 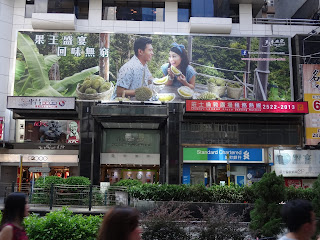 Yes, there really is such a thing as durian tourism! 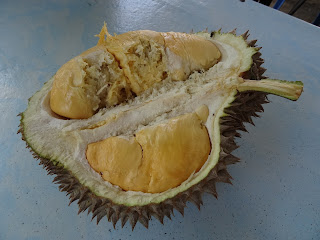 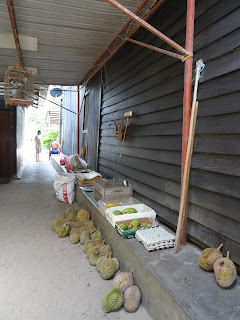 A rural corner of Penang that's rich in durian!

In what can now seem like another lifetime, I lived for a time in Dar es Salaam with a Tanzanian family, the majority of whose members were born and raised on the Tanzanian mainland -- and consequently had little love for the fruit known in Kiswahili as duriani and Bahasa Malaysia as durian, unlike this Malaysian and the sole member of the family who hailed from Zanzibar (where durian grow wild).

Naturally, when durian season came along, the Zanzibari-born member of the family and I decided that we had to have ourselves some durian.  Equally expectedly, the durian-hating family patriarch ordained that no durian could be brought into the house, never mind be opened and eat there -- and there any one who wished to partake of the admittedly strong-smelling fruit would only be allowed to do so away from the house, at the far end of the garden!

Undeterred, the one lover of that fruit in that family and I went on to do precisely that.  And if truth be told, I actually do think that durian are best eaten out in the open air -- or, at the very least, some place where their unique aroma can waft freely and spread out rather than be trapped and thicken in air-conditioned surroundings!

Put another way: I love the taste of durian and am okay with its natural smell -- but feel that its aroma gets unnaturally as well as overly intense in such places as Hong Kong's air-conditioned supermarkets!  Indeed, I've been known to literally hold my nose when I smell durian in air-conditioned supermarkets, and even feel like gagging on some occasions.  Yet, against the odds, the very regular sight of the fruit that's the source of those intense odors in recent months caused me to yearn to feast on them so much that I ended up booking a trip to a part of the world where some of the best durian are to be found!

As it so happens, Penang also is where I was born and my parents still live.  And it was in the company of my mother and two friends that I drove all the way to Balik Pulau (whose name translates into English as "the back of the island") a couple of days after I arrived back to my home state for some durian in the front yard of a farm whose offerings include fresh eggs along with fruit such as -- when in season -- the much sought-after durian!

My mother had called ahead to reserve five durian -- and a good thing she did too, as it turned out that every durian at the farm that day had been spoken for!  So even though we actually would have liked to have eaten more durian, we had to content ourselves with the five that had been pre-ordered (and content ourselves with heading over to Kim Seng Kopi Tiam afterwards for some assam laksa for "afters")!

Still, although the quantity was less than we would have liked, we really couldn't complain about the quality of the durian we were allocated -- and also the diversity, since the farm owner made sure that we had five different varieties of the fruit: which ranged in flavor from sugary sweet to creamy rich (my favorite) to bitter sweet (the preference of one of our party); whose texture ran the gamut from soft and sticky to thick and firm; and whose pulp's color ranged from lightish yellow to bright yellow to reddish yellow (as can be seen by certain durian being known as ang heh (red prawn), ang sim (red heart) or ang jin (red egg yolk)).

And although Malaysian durian are known to be stronger smelling than, say, Thai durian, I wasn't bothered at all by the aroma of the durian I ate that day in Balik Pulau.  In fact, I'd go so far as to say that I could hardly smell the durian around me at all!  I think one reason for this was because our feasting took place in the open air but it's also highly probable that the durian didn't appear to smell all that much because I was so focused on devouring my share, and all of us ate ever so quickly -- because, well, the king of fruits lived up to its billing in terms of its tasting so very good! ;b
Posted by YTSL at 11:03 PM

You should take more pictures of the durians. Too busy eating? hahaha....

Next trip I want to go Balik Pulau too. Seems like the best durians are there. How much did you pay for the 5 durians? Can give me the contact and address of the farm?

Have to admit that I stopped taking photos after the second durian got opened -- I was too busy eating and my fingers and hands were too sticky with durian pulp!

The proprietor understands some Mandarin but Hokkien is best. And definitely make sure you call in advance -- otherwise, there may be no durians available (though there should be plenty of eggs around)!

I'm enjoying reading about and seeing photos from your home state.

I actually don't take all that many photos when I'm back in Penang -- but this time, I took enough to merit a couple more Penang-themed entries, I reckon! ;b