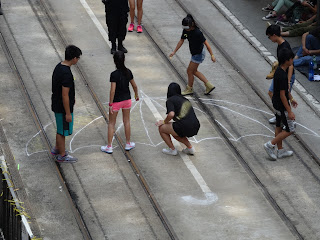 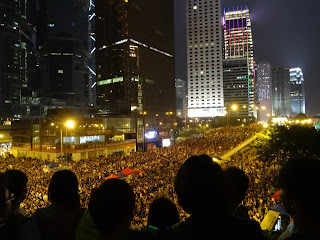 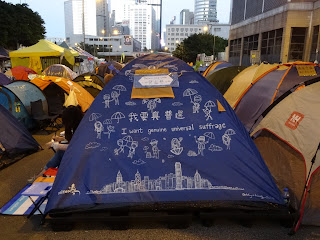 One year on, the message remains clear: I -- along with
many others -- want genuine universal suffrage for Hong Kong

One year ago today, I returned from a trip to Germany and Luxembourg on what turned out to be the final day of the street occupation phase of the Umbrella Movement which began in earnest, ironically, on the day that I had returned from a Japan trip a few months earlier.

In the wee hours of September 28th, 2014, law professor Benny Tai announced the commencement of the Occupy Central with Love and Peace campaign.  In truth though, many of us think that the political protests would not have escalated and got as much support as it did without the Hong Kong polic firing 87 cannisters of tear gas at people whose scariest weapons were words, who resorted to using umbrellas to protest themselves from police truncheons and other weapons.

On China's National Day, I, together with hundreds of thousands, if not over a million, people, proceeded to spend time out on the streets of Causeway Bay, Wan Chai, Admiralty, Central, Tsim Sha Tsui and Hong Kong showing our love of Hong Kong.  I know many people who ended up spending nights on the streets and still more who spent many daytime hours over the 79 days and 78 nights during which Hong Kong was "Occupied", determined to be seen, heard and counted, and to make a difference.

One year on, there are times when it can feel like the Umbrella Movement didn't happen, like all of that had been just an illusion and dream (or, as some would see it, nightmare).  After all, Hong Kongers still don't have genuine universal suffrage.  Leung Chun Ying remains Chief Executive of the HKSAR.  Mainlanders are still coming to Hong Kong and buying things.

On the other hand, there do appear to be fewer mainlanders visiting Hong Kong these days.  The Hong Kong government's proposed political reform resolution that sparked the Occupy/Umbrella Movement, etc. protests was voted down by Legislative Councilors in June.  And the Hong Kong District Council Elections last month saw a huge rise in voter registration and turnout, and wins by a number of "Umbrella Soldiers", idealistic, pro-democracy individuals running for polical office for the first time in what amounted to the first polls post the Umbrella Movement.

On a personal note: I definitely have been changed by the Umbrella Movement.  Among other things, the Umbrella Movement made me care more about what happens to and in Hong Kong politically, made me see Hong Kongers in a different light, and made me love Hong Kong more than ever.  Oh, and watching videos like this keeps alive my hopes for and faith in the people of, and the place where I want to make my home.
Posted by YTSL at 6:58 PM

Great post. I've heard about this but was particularly interesting hearing and seeing it through your eyes.