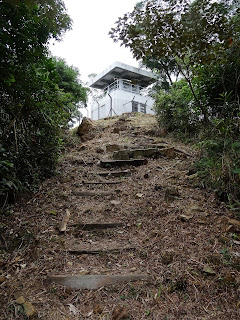 The fire-lookout station a friend and I
climbed up to as part of today's hike :) 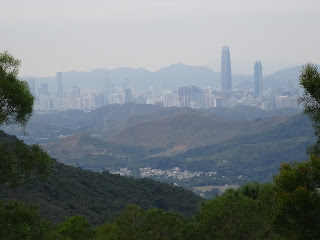 From up there, we could look across the border into Mainland China
(Yes, that's where the built-up area in the picture is!)
Shortly after I woke up this morning, I sat down in front of my computer to get today's weather forecast.  It had poured quite a bit yesterday afternoon and evening, and more rain had been predicted for the early part of today.  So not only did my heart leap with joy to learn that the rest of the day would be clear -- and, in fact, that visibility was as high as 50 kilometers in some parts of Hong Kong!
Realizing that by a stroke of luck, I'd be out hiking this afternoon in ideal conditions brought about by the rain having cleared the air in addition to the temperature having cooled down by some 10 degrees Celsius compared to last Sunday, I decided to add a visit to one of Hong Kong's eleven fire-lookout stations to today's planned hike from Lau Shui Heung to Fung Yuen via Sha Lo Tung; this because the areas where fire lookouts are located tend to offer up some pretty stupendous panoramic vistas.
So it proved in the case of the fire lookout located up on a verdant hill between Lai Shui Heung and Hok Tau Irrigation Reservoirs that a friend and I trekked up to this afternoon.  And while it was to be expected that we'd be able to see nearby Cloudy Hill, I was amazed to discover that the considerably more far away Ma On Shan also was visible to view -- as were the skyscrapers of Shenzhen over on the other side of the Hong Kong-Mainland China border!
Incidentally, although I've hiked up to fire lookouts before in Hong Kong, today was the first time that I came across one that was actually being manned.  While my friend and I were admiring the views from the hilltop and exclaiming to each other how wonderful they were (something which my camera just doesn't do justice to), a man came scampering out of the fire-lookout station.
When I first saw his anxious look, I thought he was going to tell us that we weren't supposed to be up there.  Instead, he bid us a quick "hello" before running several steps down the hill -- to a, frankly, rather smelly outhouse we had passed along the way up!  And although we hung about for a few minutes up there, we didn't see him again...leaving me to conclude that the poor fellow appeared to have had a pretty upset stomach (that, hopefully, wasn't an indicator of anything serious)! ;S
Posted by YTSL at 11:11 PM