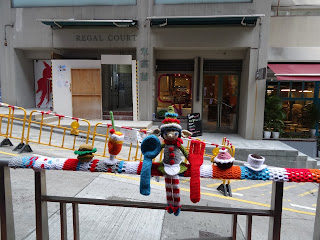 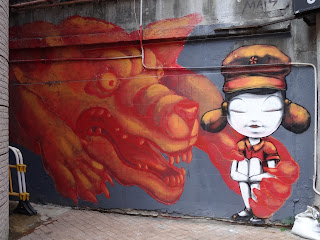 Protest art spotted in Causeway Bay a few months back

Early on in my time in Hong Kong, the company I worked for then had a couple of summer interns from New York.  For some reason, I remember one of them marvelling out loud one day how bereft of graffiti Hong Kong was.  At the time, I took it as praise that the Big Lychee was much more free of vandalism than the Big Apple.  Later on though, I got to wondering whether she had meant that Hong Kong seemed bereft of artistic creativity and the willingness to color outside the lines, not just within them.

I'm not sure if it's because of my changed perspectives or whether it's really the case -- but I've noticed more graffiti and/or bona fide street art of Hong Kong in the years since.  Initially, the more eye-catching ones either looked to have official approval (be it by the government or commercial enterprise) or were created by foreign artists (like the anonymous French street artist dubbed  "Invader").  But especially during and since the "street occupation" phase of the Umbrella Movement, I've come across more and more examples of independent and indigenous public art, including of the political protest variety, out on the streets of Hong Kong.

Take, as an example, the colorful mural I spotted on a wall in Causeway Bay a few months back.  Located just a few streets away from what had been the Occupy Causeway Bay space this time last year, its political message of a young, defenceless Hong Kong being threatened by a red, wolfish menace came across loud and clear.  So I shouldn't be too surprised to find, when I passed by the area again a few weeks ago, that the wall which it once adorned has been literally whitewashed.

I wonder how long the cool piece of guerilla knitting by a yarn bomber I came across after lunch one afternoon with a friend in Wan Chai earlier this week will stay in place.  I don't see it inherently political but its "illegal" nature still may offend the local authorities.  Really though, I think efforts like this should be welcome rather than condemned and/or dissuaded from taking place -- because how can't they get one smiling upon beholding their existence and admiring their makers' generous creativity? :)
Posted by YTSL at 7:20 PM

Can you still get arrested for spitting gum out on the street?

I didn't know that one could get arrested for spitting gum out on the street in Hong Kong! I figured that, if anything, one would "just" get fined for littering! :O

Making a Hong Kong calendar for private use. Could we use this photo with your credit?