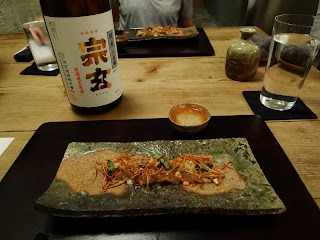 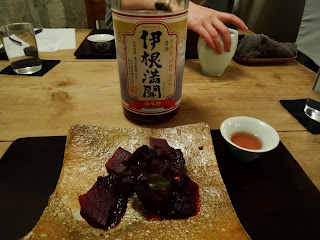 The red color-themed sixth course :b 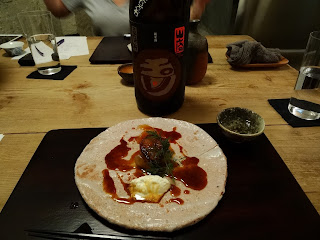 The seventh course which came across as
partly savoury, partly in dessert territory!

A couple of months ago, my über foodie friend told me that there's a restaurant that she wanted me to go to with her; one where sake was an integral part of the meal.  After I agreed to go have dinner at Godenya with her, she told me the date she had booked -- December 2nd, some two months away!  And while it may have seemed a long time back then, December 2nd finally did arrive -- and I've just got back from a dinner at this primarily Japanese restaurant (operated by a Japanese sake master and his chef young brother) which incorporates some Chinese culinary elements that was so good that she and I decided that we had to go eat again at the restaurant before we left the restaurant this evening!

Billed as a sake pairing dinner, this evening's meal at Shinya Goshima's eight-seater restaurant consisted of eight food courses, seven of which were accompanied by a chosen sake.  I have to admit that before tonight, I was more excited by the prospect of trying out the libations at Godenya than the food; this since it'd be the first time that I would be tasting sake warmed to a chosen degree by a bona fide sake master.  And my anticipation increased upon perusing this evening's menu and seeing that among the sake we'd be drinking was one that was eight years old and another which was made from red rice!

Once dinner began being served, however, I realized that the food we'd be eating would be of a high quality and also very interesting too.  For example, the first course (billed as the oyster appetizer) not only included four very tasty oysters but those oysters were served in a jelly concoction that also included refreshing bits of fruit!  And I couldn't help making ecstatic noises when eating the second course, which consisted of the rich roe of a female snow crab which had been soaked in sake for a day with a portion of Chinese- (rather than Japanese-)style rice vermicelli to help balance out the flavors.

As good as the second course was, I actually thought the third course was better tasting.  Definitely more complex tasting, its ingredients included the meat and liver of kawahagi (thread-sail filefish), bits of green tea leaves, and what Goshima-san told us was white mushroom but tasted like truffle to both my friend and me.  Eaten on their own, each of the third course's components were delicious; eaten when mixed together, the resulting taste was revelatory!

Next up was an exotic take on the usual, comforting chawan-mushi (Japanese savory steamed egg custard).  Alternatively put: the filling fourth course at Godenya was the first chawan-mushi I've seen topped with an inch or so of dashi, and containing the tender meat of the Chinese soft-shelled turtle.

Of the eight courses of food I had at Godenya this evening, the only one which I didn't find delicious was course number five on tonight's dinner menu.  Beautifully presented inside a hollowed out yuzu fruit, I actually could have done with more yuzu in the serving and far less of the citron fermented bean curd sauce that tasted a lot like sour mayonaise, and having its consistency too!  As it was, I found the bits of angler fish, gingko nut and lily bulb that came in the mix to have been drowned in a sauce that just didn't work for me.

Although the sixth course came with another fermented ingredient, this time around the fermented black bean sauce worked really well with the chunks of wagyu beef and beetroot in the dish.  Aesthetically, they made for an all red show -- with the theme continuing with the sake served for this course being a red rice sake from a Kyoto brewery known as Inemankai (the sake, not the brewery).  Taste-wise, this was the first time I found beetroot cooked to my liking!

The seventh course, consisting of foie gras cooked with a coffee caramalizer, was another one that made me emit little moans of ecstacy.  I also let out an involuntary groan upon realizing that it was the final course in this dinner that a sake was paired with, prompting our delightfully good-natured host to giggle with amusement!

The eighth and final course of this evening's meal was a refreshing yogurt that we bathed to taste with orange osmanthus soup.  Part of me expected a cup of green tea to follow but none was forthcoming; with the only liquids served this evening being sake and water -- and, for the record, I'd not be surprised if those were the only liquids available to be served at the restaurant!

Although Godenya does not purport to serve kaiseki, I couldn't help comparing my meal there -- and very favorably too -- with those I've had at Ryugin and Bo Innovation.  At the same time, I must admit to thinking that I don't really get the point of warming the sake served this evening; and indeed, I'm moved to wonder whether it's a coincidence that my three favorite sake of the night were the three which were the least warm of those served.