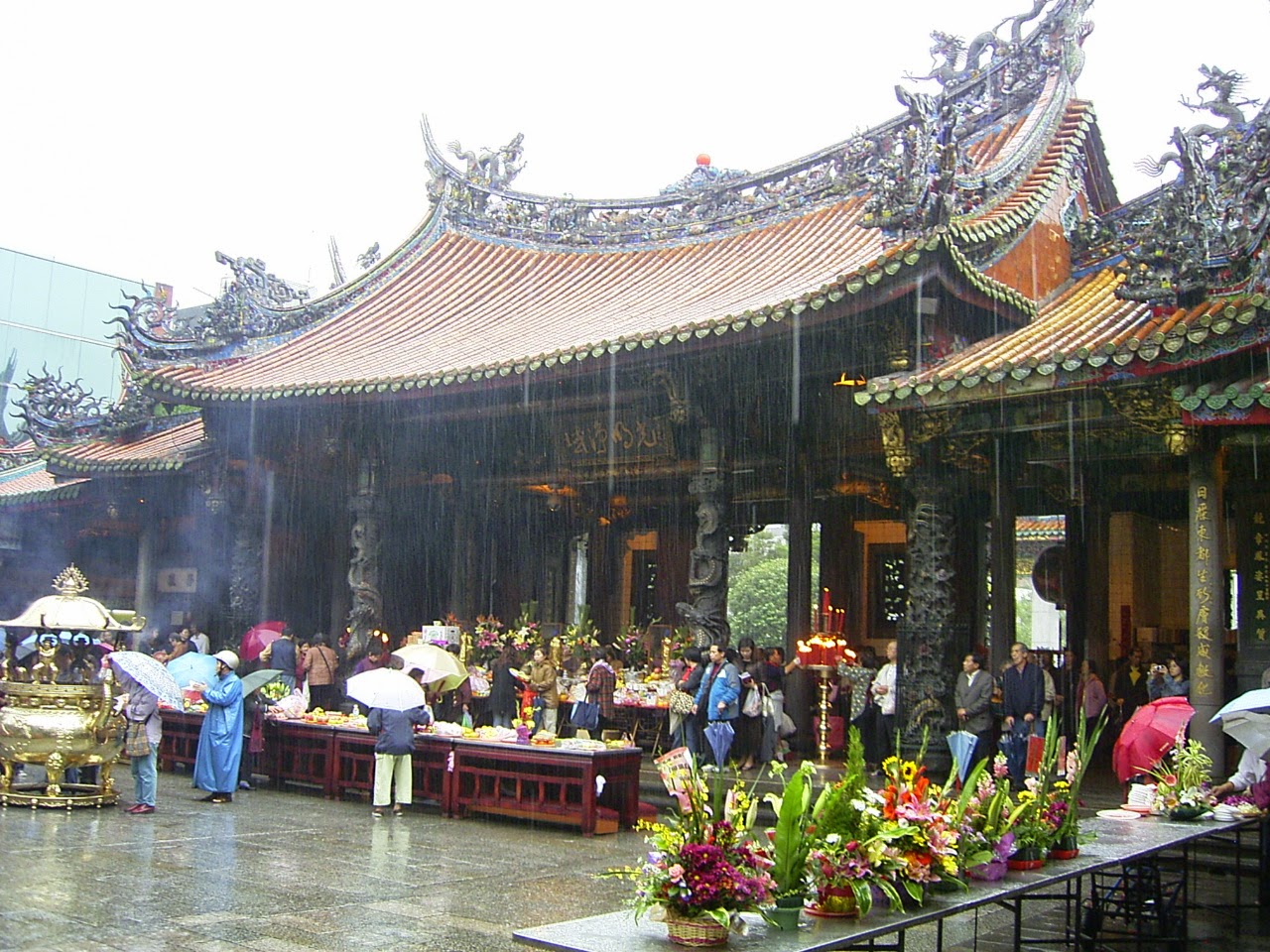 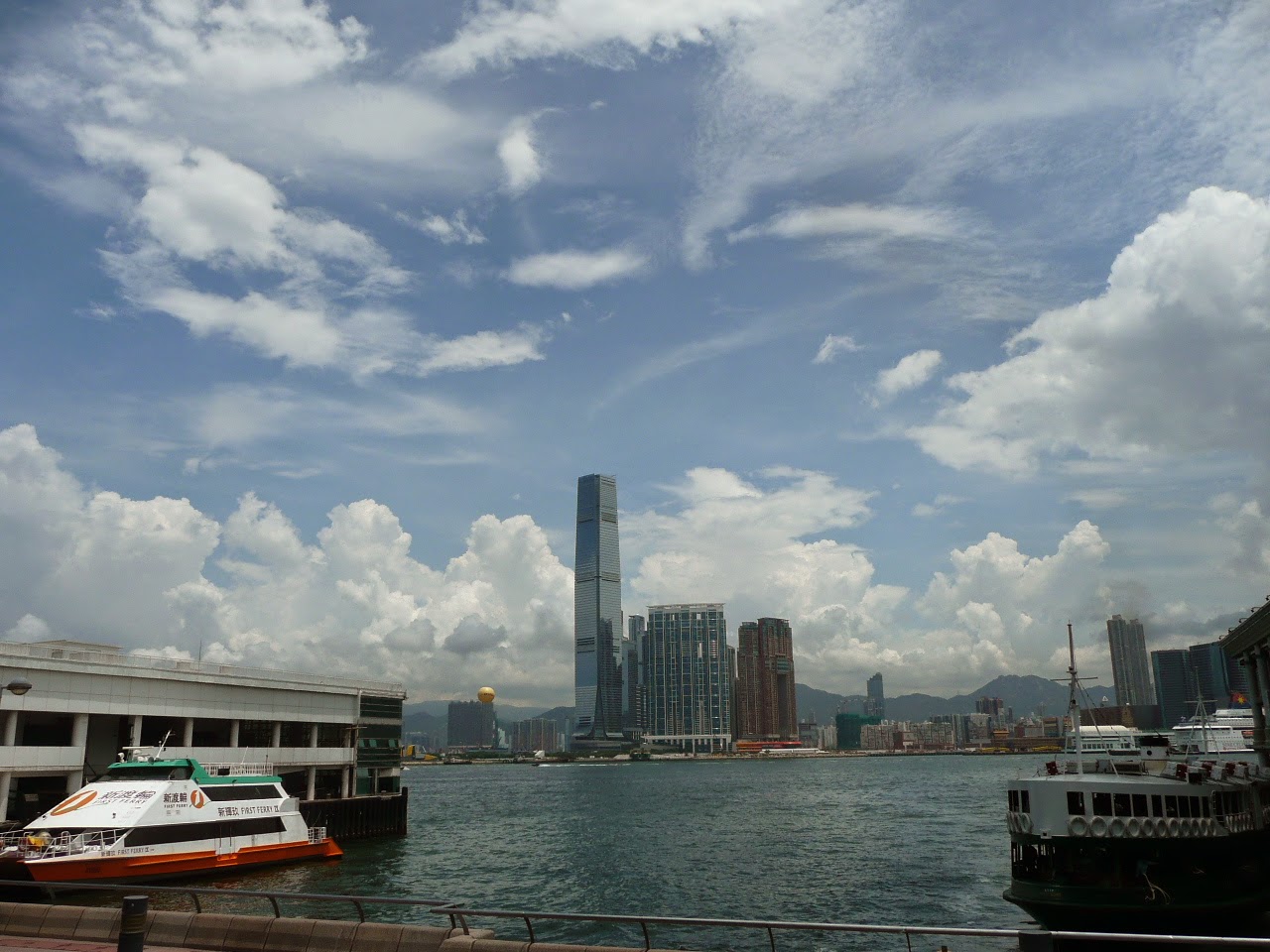 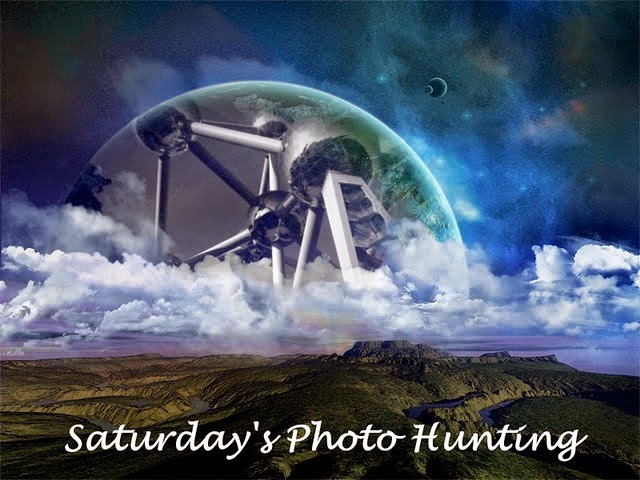 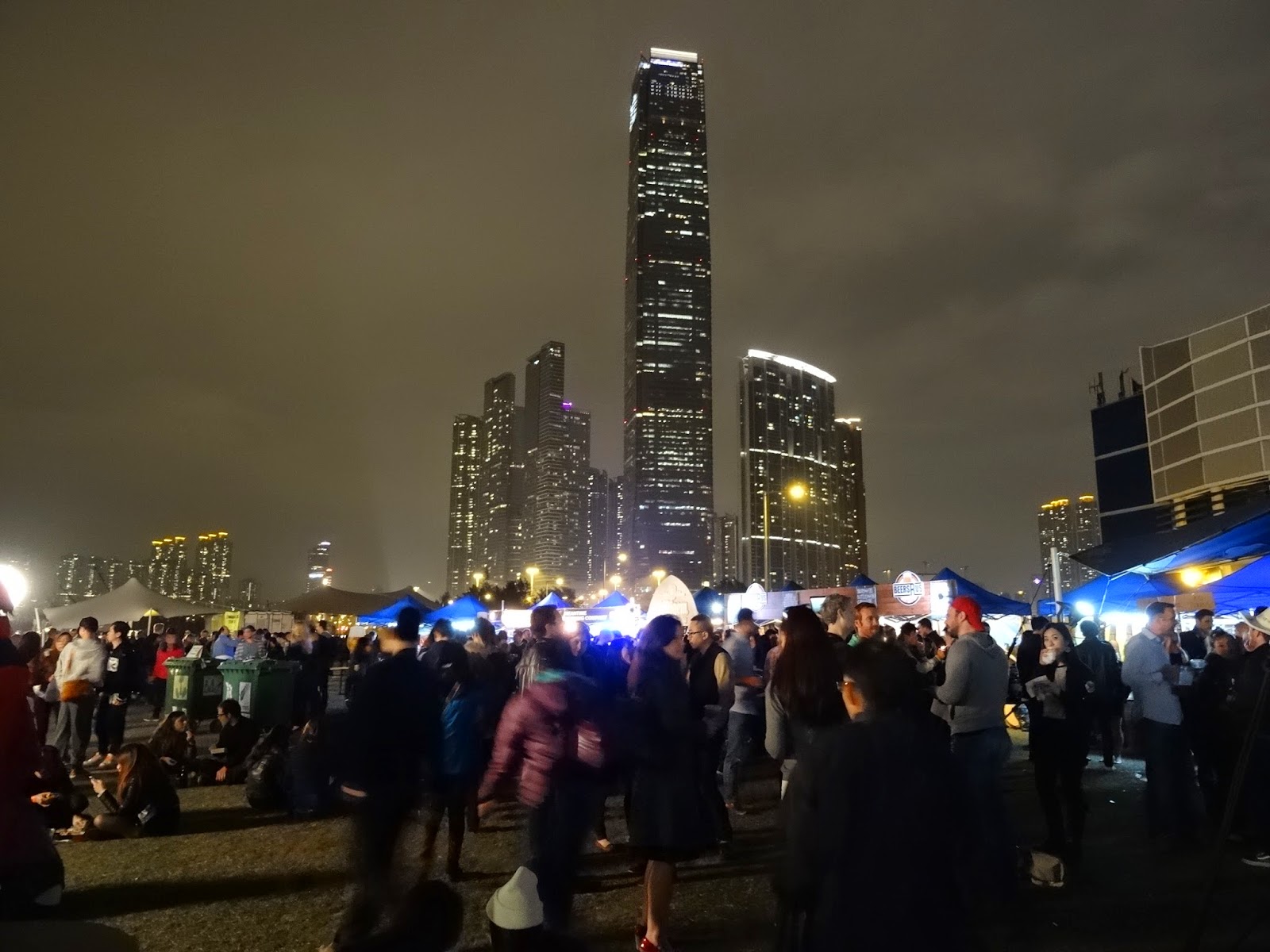 Back when Taipei 101 was the tallest building in the world (rather than number 6, like it is now), my mother and I went on a vacation to Taiwan's capital city.  In some ways, late December 2007 was a good time to visit: among other things, Taiwan's one of those countries where December 25 is not a public holiday, so museums and many other attractions were open as usual rather than closed for the holidays.

On the other hand, despite December in Taipei not supposed to be as wet as many other months of the year, it rained a lot while we were there (including on the days when we visited both Taiwan's prime example of modern architecture, Taipei 101, and the far more traditionally looking Lungshan Temple).

Despite it being ultra-wet when we visited, I still got much out of our visits to both those Taipei landmarks, including some cool photos. (Incidentally, yes, I could have used just photos from my Taipei trip for this entry for Sandi's and Gattina's Photo Hunts but decided to go for a bit more geographic variety!)

This was particularly so at atmospheric Lungshan Temple, which I would happily have spent more time photographing if my mother had not been champing at the bit to go somewhere else!  But while my mother and I enjoyed going up to the observation floor of Taipei 101 in its super fast elevator and then walking around and viewing the rest of city from up on high, doing so only got us thinking that as far as tall buildings and other examples of modern architecture go, Hong Kong actually impresses way more.

Sure, "Asia's World City" has never had a building that held the title of world's tallest but Hong Kong easily tops the list of cities with the most skyscrapers.  And although there are people who like to criticize its modern architecture as being on the visually boring or uninspired side, I reckon that some of them, including that which is its currently Hong Kong's tallest building, actually don't look all that bad, be it during the day or at night.

At the very least, I do like that the International Commerce Centre is part of a complex with other tall buildings near it. To my way of thinking, this makes it look less ridiculous and an "ego-product", the way that buildings built to tower over everything and look like they're standing in isolation are -- like *cough, cough* my home state's 60-storey-high Kompleks Tun Abdul Razak (KOMTAR), which sticks out like a sore thumb on the cultural heritage-rich George Town landscape even now, close to 40 years after it was first built! :S
Posted by YTSL at 12:01 PM

That is the right attitude when traveling- it may be wet but you're on vacation so embrace it!

Great shots for this week's theme!

I agree with you and Jerry, you have to deal with wet weather sometimes, but no reason to let it ruin things Great pics I love the last crowd shot :)

My photo hunt entry for this week

I've had wet vacations before too - it's not hard to make the best of it! I love that temple. All your photos are nice. Happy weekend!

Hi YTSL, that temple is gorgeous. I love the pretty night photo of the skyline. I'm not afraid of heights that much, but I always tend to get a little nervous riding up on elevators on really tall buildings. But the views once up there is always worth it.

Wow! I would love to see those buildings in person!

I try to avoid going to a place during its rainy season but ya, when it does rain when I'm on holiday, I just try to do things like visit museums then! ;)

There are some places where I think it'd be difficult to enjoy your vacation if it rained a lot when you're there. Fortunately, there also are places where you can always find things to do when it rains...

Re the last crowd shot: that was taken at this year's Beertopia, by the way! ;)

Well, if I were on, say, a hiking or cycling holiday, I'd be upset if it rained a lot during them. But otherwise... ;)

I have a bit of a fear of heights myself. But it doesn't usually strike in buildings -- unless I'm on, say, a 49th floor balcony or on a glass floor (the latter of which happened at the Macau Tower)! ;b

Make a visit to East Asia sometime then! :)

You always have such interesting information to go with your photography.

And I appreciate that you visit and read as well look at my Photo Hunt entries. :)

I never knew Xmas is not a public holiday in Taiwan. Looks like it would be a good time to visit. Weather would cooling. HOpefuly no rain.. :)

What a pity! Also, would it be correct to assume that your fear of heights meant you didn't dare to go on the Maokong Gondola too?

Yeah, on Christmas Day in Taipei, my mother and I went and visited the really cool Miniatures Museum of Taiwan! :b

A good Photo Hunt which cleverly contrasts the old with the new. Your "atmospheric" photo of the Lungshan Temple is especially significant for me since this temple was one of the things which first ignited my lifelong passion for Asia. I was fascinated how the temple was open to the street and was a kind of social hub of activity that would make a visitor feel comfortable.

I'm glad to have brought back good memories of Lungshan Temple for you. :)