An afternoon visit to the Fung Yuen Butterfly Reserve 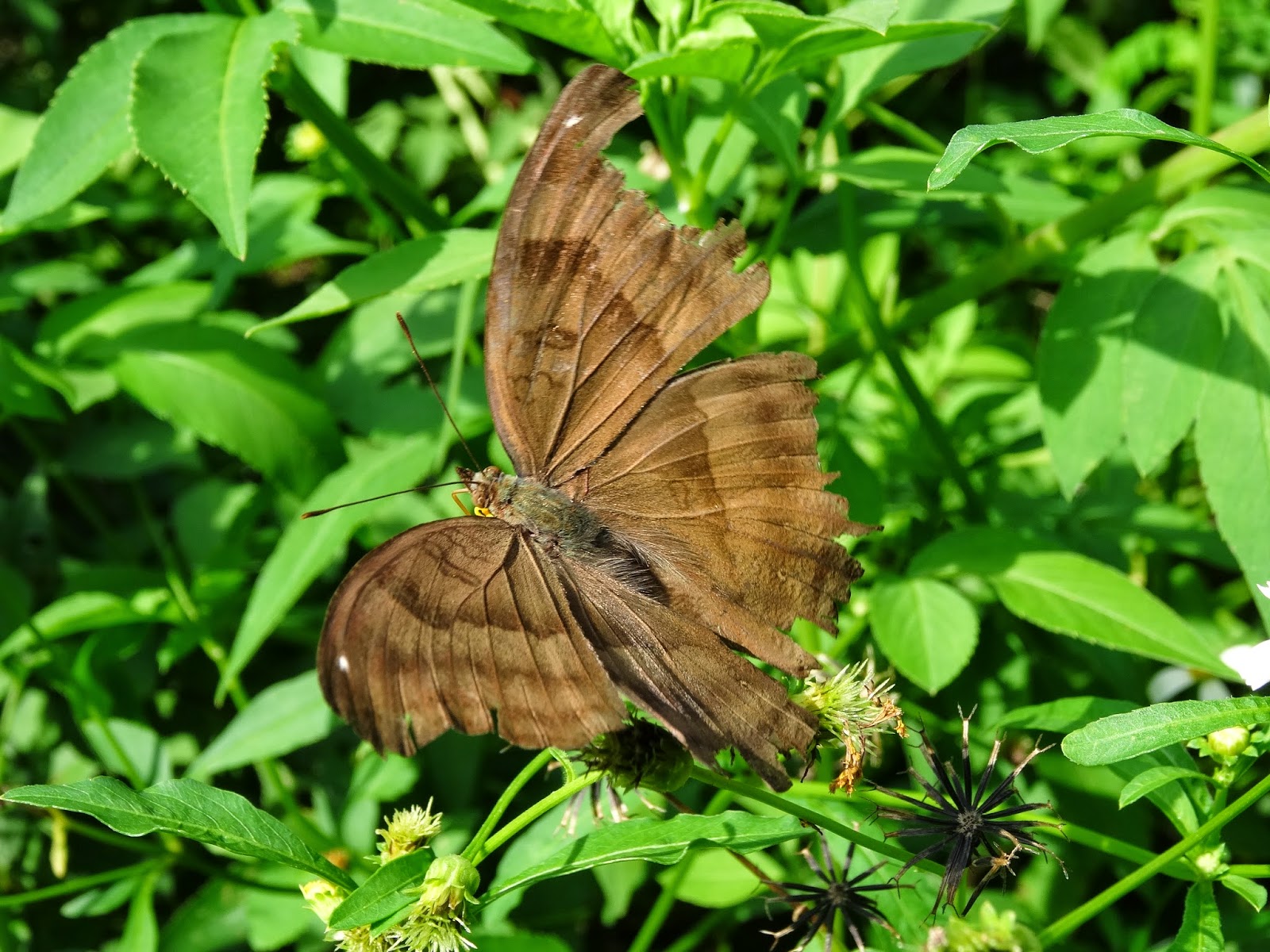 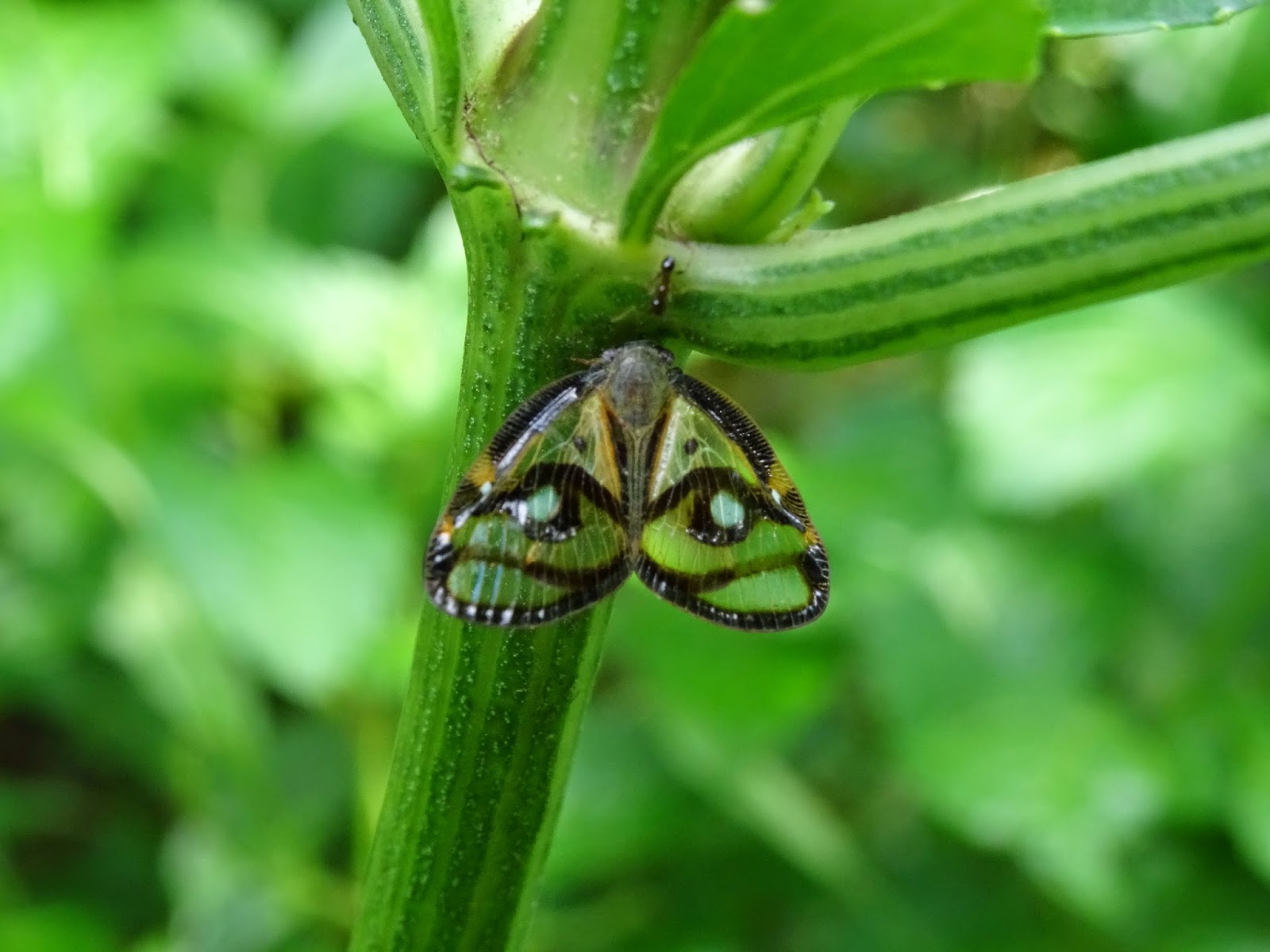 A much smaller winged creature (check out its size
relative to the black ant above it in the photo!) that
I also spotted at Fung Yuen this afternoon 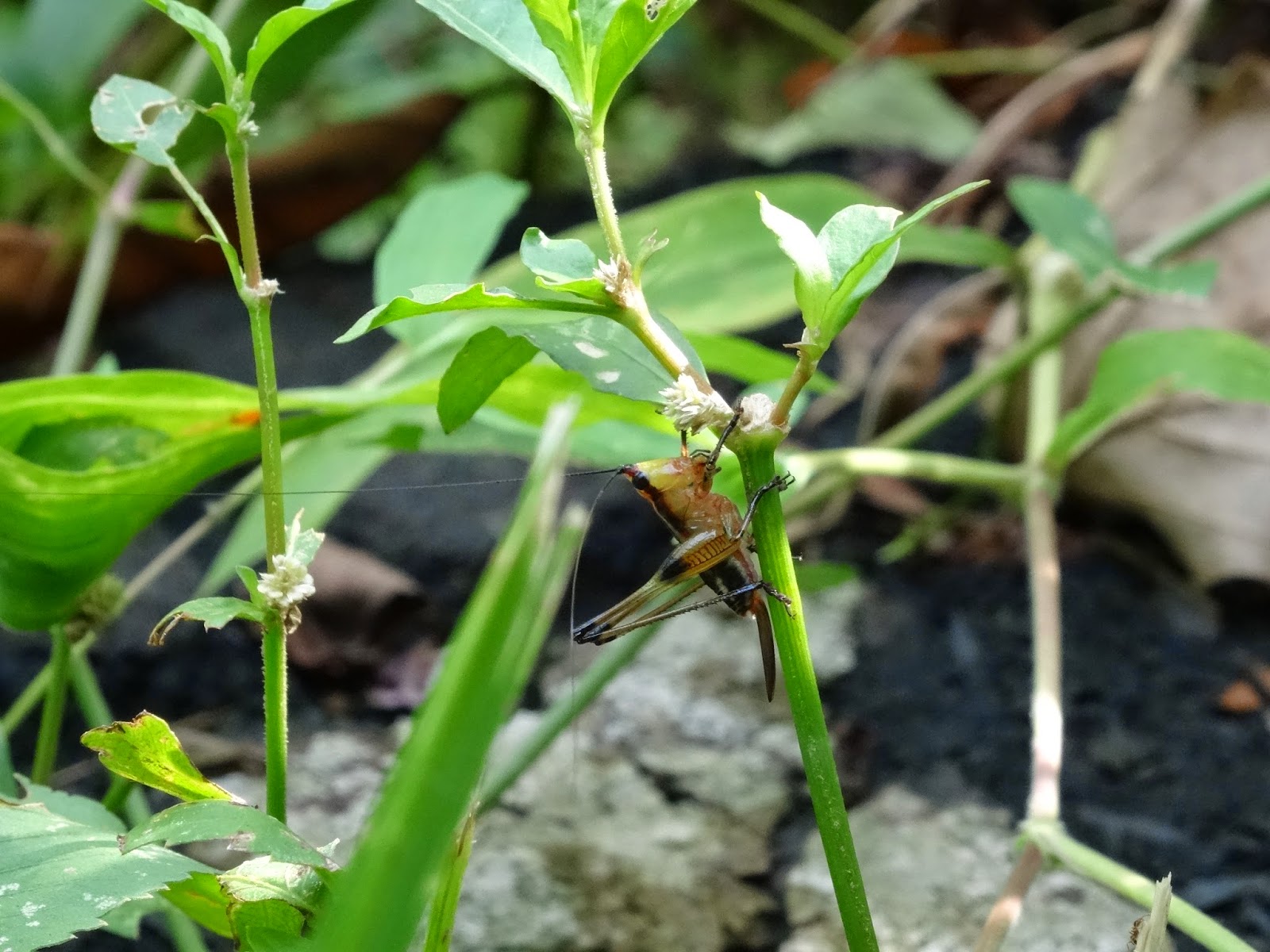 Closer to the ground, I spotted such as
this grasshopper and its long antennae :)

Earlier this week, Super Typhoon Rammasun came close enough to Hong Kong to warrant the raising of Typhoon Signal Number 3.  Unlike with sections of the Philippines and mainland China, it spared us from disaster, with only some strong gusts of wind and changeable weather providing evidence of its being our neighborhood.

Because the weather was so unchangeable the past few days, my hiking friends and I opted against meeting up this Sunday -- and when it poured with rain for some time this morning, I felt that we had made the right decision.  But when the afternoon came and bright sunshine with it, I just had to head outdoors to someplace green and (relatively) wild!

I had passed by the Fung Yuen Butterfly Reserve a few times on hikes but it wasn't until this afternoon that I paid a visit to this famous (in hiking and naturalist circles) butterfly haven where more than 200 species of butterflies have been spotted.  Managed by the Tai Po Environmental Association, its admission fee is an entirely reasonable HK$20.

In recent years, this area that's been designated as a "Site of Special Scientific Interest" has come under threat as a result of housing developments in the area, notably the controversial Mont Vert that the Hong Kong government has issued an official advisory about and which has apartments whose small size has shocked quite a few folks.  And seeing the crowd of real estate sales agents and prospective flat buyers milling about when I got off the mini bus I took to Fung Yuen got me worried that enough damage had already been done to drive lots of butterflies away.

But even while I visited outside of the optimal hours for butterfly watching (i.e., 9am-11am or before sunset in the summer months), I still did spot a good amount of butterflies and other critters (notably dragonflies, Golden Orb Weaver spiders and grasshoppers) at Fung Yuen this afternoon.

If truth be told though, I feel like I've been on hikes where I've seen more butterflies than I did in the one and a half that I spent within Fung Yuen's approximately 42 hectares this afternoon.  Where today's experience can't be beat though is in the diversity of butterfly species I spotted in such a short space of time, with the bonus coming from there being a number of butterfly species that I saw for the first time this afternoon!

I'm not sure how rare these butterflies are but they don't seem to be represented in the Hong Kong Lepidopterists' Society' extensive butterfly index as well as the LCSD's Butterflies in Hong Kong's Urban Parks' pages and Green Power's Butterfly Gallery.  In the case of the butterfly in the top most photograph in this entry, its design resembles a chocolate pansy but the edges of its wings don't.  And in all honesty, I'm not 100% sure that the critter in the photo is actually a butterfly -- since I've never seen one with such see-through wings before!

As with the strange spider I saw while out hiking a few weeks back, I'd be grateful if someone could identify them.  So here's thanking in advance whoever is able and willing to do so! :)
Posted by YTSL at 11:27 PM

I figured you'd eventually post an entry on Fung Yuen Butterfly Reserve (I had linked to their site before). I like all of your photos in this blog, especially the top one. The brown wings of the butterfly remind me of an old parchment. (Actually it also resembles a moth)...As regards the extraordinary spider in your June 29 NE HK Hike, I haven't found an image of it online. It really is a striking spider. Its body reminds me of mother-of-pearl.

I'd been saving Fung Yuen Butterfly Reserve for a rainy day (metaphorically speaking!). Am glad you like my Fung Yuen photos.

The books you recommend sound interesting, in particular World Film Locations: Hong Kong. It may be painful to read though as I can imagine that a lot of the film locations don't exist any more!