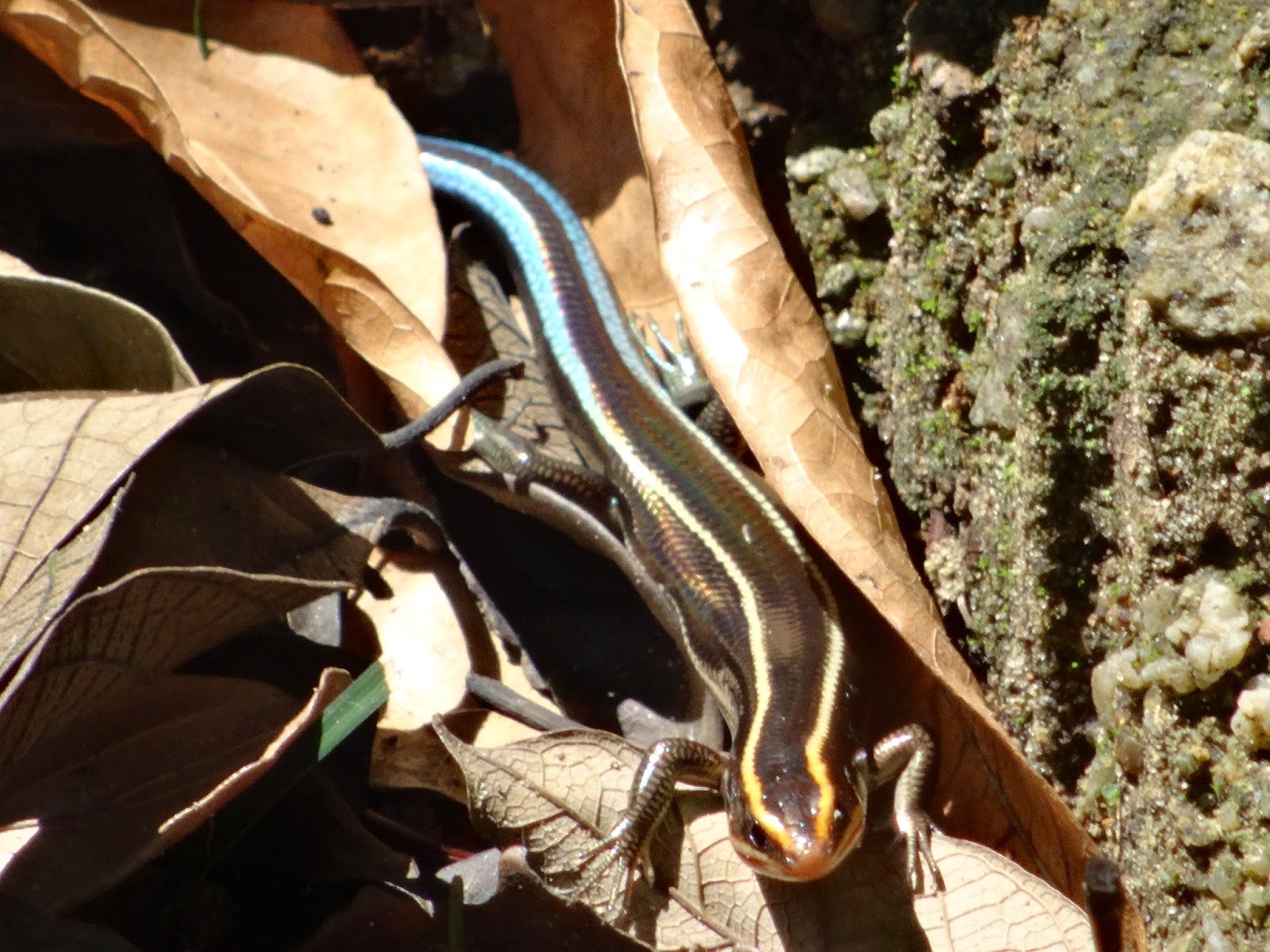 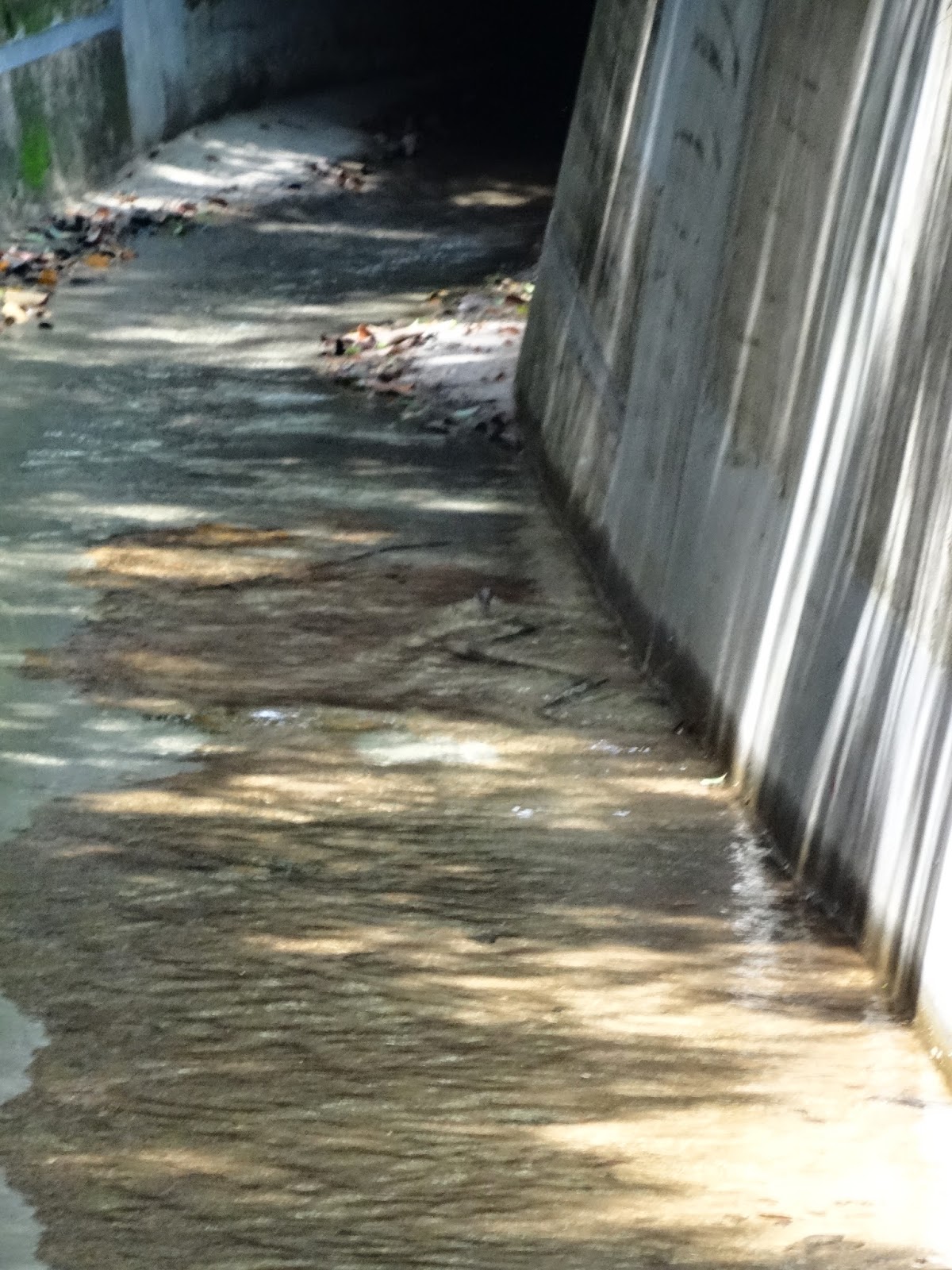 Can you spot the large snake swimming
in the water in this photo? :O 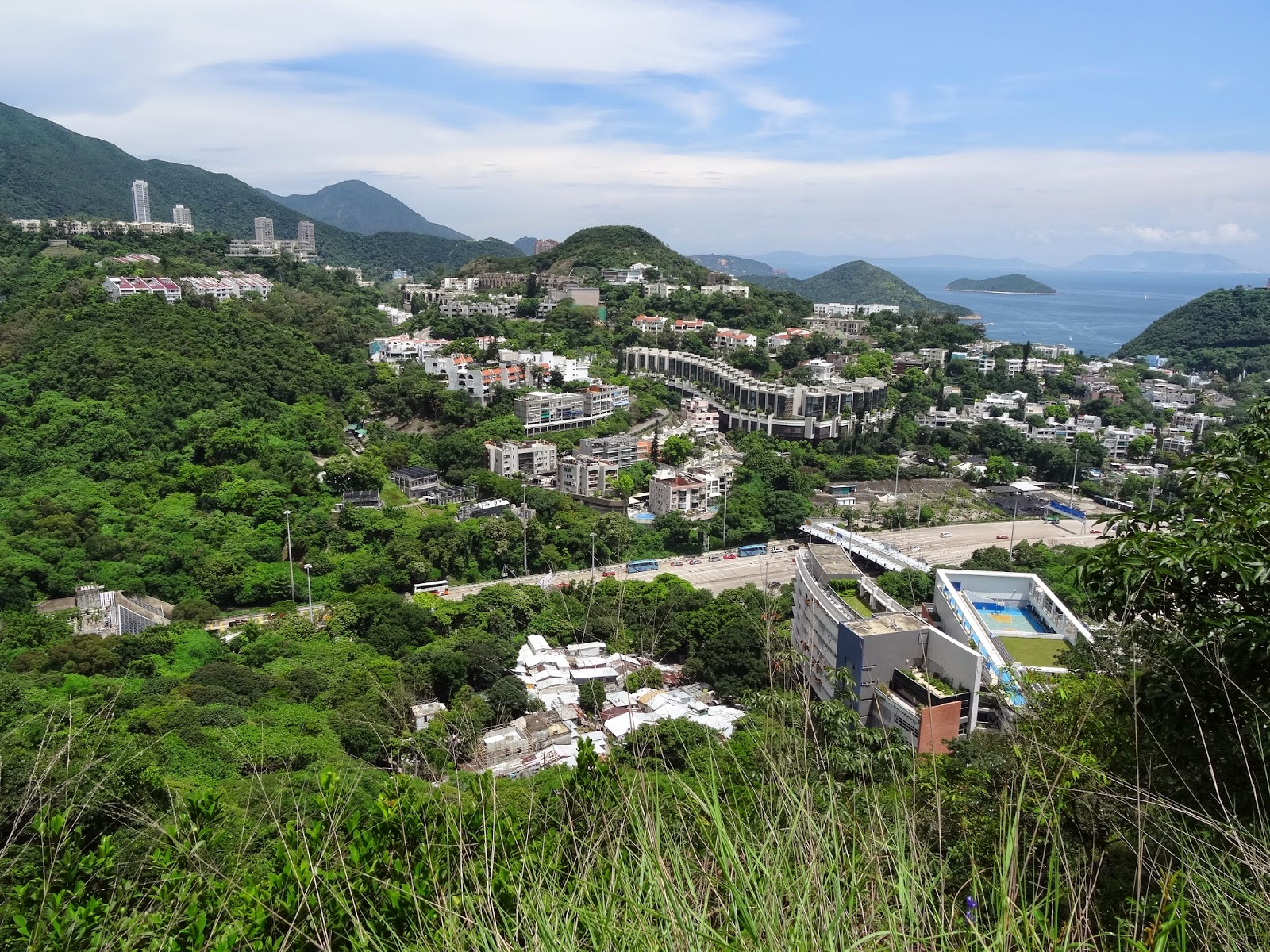 These critter spottings, and more, occured on a hike
in the hills of...not Lantau but Hong Kong Island!
Earlier this afternoon, a friend and I went on a hike that took us from Wan Chai Gap to Wong Nai Chung Gap along a route that also took us down to Aberdeen Upper Reservoir and along Lady Clementi's Ride.  Since the "very hot weather warning" had been issued, we opted for a leisurely pace that allowed us to scan about us for interesting sights.

Less than five minutes into the hike, I made my first skink spotting of the afternoon.  Sometime later, I spotted another skink -- this one considerably smaller than the first one but also of the blue-tailed variety.  Both times, my friend was too slow to spot the creature while I was too slow to snap a photo of it.  But it turned out to be third time lucky for us when the third skink I came across on this hike opted to stay put rather than scurry away after my friend caught sight of it -- and thereby gave me the opportunity to take many pretty clear photos of it!
In contrast, the one snake that we spotted on this hike was moving about rapidly -- making it difficult to take a good photo of it.  Of course, I could have run and got closer to it -- but when I tell you that it looked at least six feet long to us and was swimming very fluidly in the water of the catchwater on which edge we were walking, can you blame me for not wanting to do so?
As it so happens, I remarked early in this hike to my friend that it was rather surprising that we hadn't spotted a snake on a hike thus far this year -- this especially since I had had a snake encounter on my visit to Japan this past May and there have been a number of local news reports in recent months of snakes doing such as attacking people's pet dogs and entering homes!  Instead, all we had seen in Hong Kong in 2014 as far as snakes were concerned was a long piece of shed snake skin on one hike and even more bizarrely, pieces of chopped up snake on another...until this afternoon, that is!!
The skink and snake spottings were the highlights of a hike that also included plenty of big spider spottings (oh yes, it's that time of the year again!) along with spottings of pretty butterflies and other colorful bugs (including a grasshopper with red bits on a couple of its legs!).  In addition, there were beautiful clear views to be had of the southern part of Hong Kong Island that served to remind me once more that there are indeed some marvelous visual compensations to hiking in the super hot and humid conditions that are to be expected of summers in this part of the world. :b
Posted by YTSL at 11:10 PM

Hi YTSL -- Those are some cool colours on that skink!!!

For sure... and could you spot the snake: a clue: it's got its head above the water!

Are you thinking of making a horror movie/? That second photo gives me the creeps! Like the skink photo.

Have no plans to make any movies -- I'm content to watch them!

Re the second photo: I take it you did see the snake. And I'm glad you like the skink photo. I find its little legs very cute. :)