The Maclehose Trail is the oldest and lengthiest of Hong Kong's four long trails whose various sections often can be separately completed. Opened in October 1979, the 100 kilometer trail consists of 10 sections of varying lengths.

One beautiful day in November 2011, three friends -- one of whom was making his first ever visit to the Big Lychee -- and I hiked along Section 1 and part of Section 2 in reverse.  Because Section 1 ends at Long Ke (where there's a beautiful beach but is quite a distance from any roads, never mind public transportation), it can't be done on its own.  So we tagged on the bit of Section 2 that's within walking distance from Sai Wan Pavilion (which itself is reachable via Village Bus 29R which one can take from Sai Kung town).

The hike was a lengthy and tiring one -- but, as I previously noted on this blog, it made for a great day out.  And here's offering up some photos to prove it! ;b 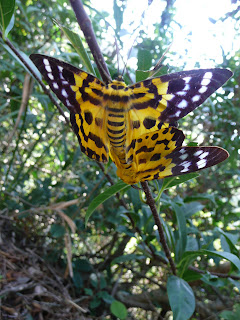 Sorry, but I can't resist putting up this photo
of a couple of butterflies we spotted
going at it early in the hike! ;)

One of our first glimpses of High Island Reservoir 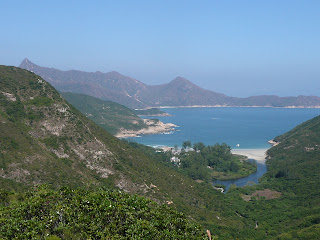 After getting on the Maclehose Trail, we were given
glimpses of beautiful Tai Long Wan 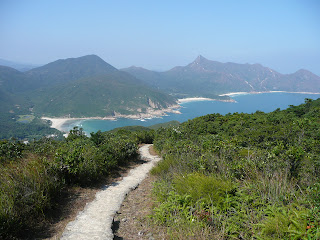 View from further south along the trail of Tai Long Wan

314 meter high Sai Wan Shan was the highest point
we reached on this hike -- and there's a
trigonometrical station on the hilltop to prove it! :) 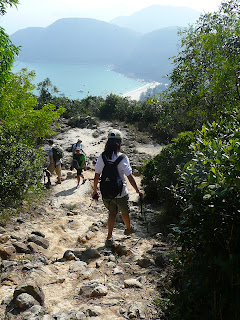 From there, we descended down --
all the way to that beach in the distance! 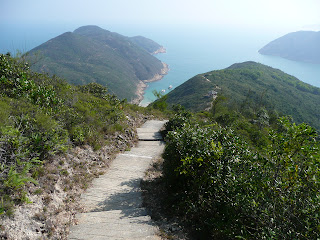 Another view of and on the way down Another -- more impressive? -- perspective
of the hill we were on and then descended down

To be continued... with at least one more photo-essay of this hike that I'm super glad to have gone on and completed! :)
Posted by YTSL at 7:17 PM