Beautiful skies should not be uncommon sights in Hong Kong 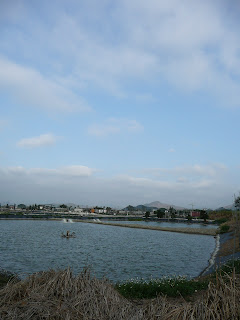 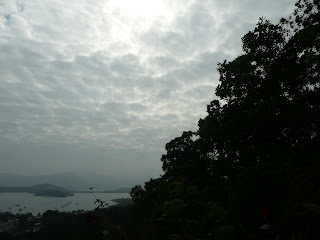 In recent weeks, the polluted air of Beijing has made headline news all over the world.  Close to a thousand kilometers south of China's capital city, the air quality of Hong Kong also frequently has been quite a bit less than optimal.  So many Hong Kongers, not just city folk over in Mainland China, were looking forward to the Chinese New Year holidays when many generators of much air pollution, including the many factories helping power the Chinese economy, would shut down -- or at least lower their output -- for a few days.


Sadly though, I don't believe there's been a single fully clear sky day this past week in Hong Kong -- with even the first day of Chinese New Year itself having not been one of great visibility.  And both yesterday and today started off with hazy gray skies that really weren't very attractive at all.


However, both late yesterday afternoon and also around the same time today, the sky and air looked to have cleared quite a bit compared to earlier in the day.  In particular, on my visit to Mai Po Nature Reserve yesterday (of which I definitely will be separately posting about soon), I was treated to the unfortunately no longer common sight of beautiful blue skies over (at least some part of) Hong Kong.


More than by the way, both yesterday and today, the sky looked most glorious to me when I was in parts of the Big Lychee that were rural rather than urban; with the bluest sky having been observed in a part of Hong Kong within walking distance of the Frontier Closed Area lying on the Hong Kong side of the border between Hong Kong and Mainland China.

I'm sure that it's obvious to pretty much everyone that the urban areas of "Asia's World City" generate more air pollution than its rural ones.  And while Hong Kongers used to blame the Mainland Chinese factories across the border for Hong Kong's polluted air not so long ago, I think it's also now become pretty apparent to most people that Hong Kong also generates its fair share of pollution and consequently needs to do its share to ensure the return of more days of beautiful skies and cleaner air in this part of the world.
Posted by YTSL at 9:18 PM

HI YTSL! Sad to see your observation about the state of the air in Hong Kong... it was former CE Donald Tsang who would blame air pollution on the mainland factories so that he could claim he was helpless about the situation, when in fact as you point out, it is us who are generating a lot of air pollution! Hope that Christine Loh will really get the government's policy together on air quality because the city is losing its competitiveness when smart people want to leave the city because they can't breathe clean air!!!

I think there has only been one reasonably clear day since the start of 2013 :-(

From my vantage point nr Beacon Hill I can - on a clear day - see the Peak Tower, however it was way back before Xmas since I can remember seeing it regularly.

People say that winter is a great time to come to HK because of the cooler weather, but I always associate this time of year with bad air. Give me the heat and clear skies of the summer over haze and cool.

I want to hope that Christine Loh can make a difference but I have to also say that my patience is running short -- and so are a lot of people's!

Maybe it's my imagination but I've seen a few week days with beautiful skies and clear air. I hear you though about winter vis a vis summer. For me, winter is when I can go on long hikes because of cooler weather but I get to high ground and find myself wishing the air and sky's as clear as it can be in the summer... ;S

You could be right - I was away for the whole of CNY getting large gulps of cold fresh mountain air in South Korea and possibly missed some nice days. However, it could also be an effect of my new vantage point. When I lived in Tai Po the furthest I could see from my flat was only about 6km away, but know the distance between me and the peak is 8km. If the viz is less than 8 km I now see it as a bad day whereas previously in Tai Po I wouldn't have noticed it quite as much. Such is life...Bah!

I think it's also a case of urban vs rural (or less urban): get the feeling that sometimes, you can get (relatively) high visibility in Tai Po vis a vis the area closer to Victoria Harbour.

Hope you had a great time in South Korea. When I last visited that country, I saw plenty of beautiful blue skies there alright!