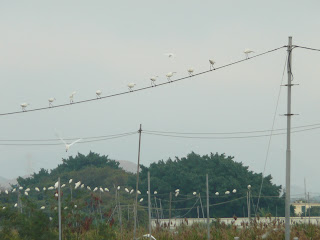 Birds (egrets?) on a wire in the area bordering
Mai Po Nature Reserve 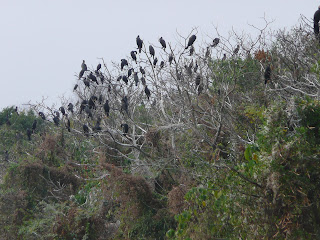 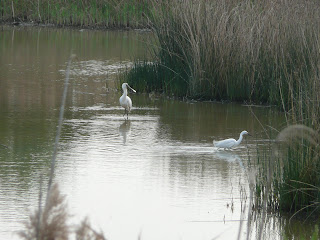 A black-faced spoonbill watches as an egret passes by 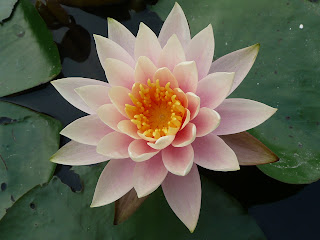 As I mentioned in a previous blog entry, I was at Mai Po Nature Reserve last Saturday afternoon.  A Ramsar Site that's home to some 60,000 birds in the winter, it's the place to go birdwatching in Hong Kong -- and that's what I went there to do with two friends, one of whom is a truly keen birdwatcher who can identify and name various species of birds, including many of the ones we saw over the course of the time we spent at Mai Po.

Since Mai Po is a place that one is not allowed to visit on one's own, we booked ourselves on a World Wildlife Fund guided tour that was scheduled to last for about two hours but ended going on for twice that time, to our great pleasure.  Even before the tour began, as we milled around in the World Wildlife Fund's Education Centre waiting for our group of around 20 people (including a few children, most of whom turned out to be very well behaved) to assemble, we were treated to the sight of interesting birds and people attempting to take photos of them with cameras that came equipped with mega-sized zoom lenses.


The first half an hour or so of the tour actually was not great at all for birdwatching.  In fact, as I told our guide, I saw more birds -- and closer up -- at Hong Kong Wetland Park!  But shortly after coming out of the one and only hide that we spent any time in at Mai Po (from where, to be fair, we did spot a number of black-faced spoonbills -- endangered birds of which there are estimated to be only around 2,700 in the whole world), we got to seeing whole flocks of birds about, some of which were (already) asleep on trees despite it not being all that late in the day.


A large percentage of the birds we saw over the course of our time at Mai Po were cormorants but we also caught sight of lots of egrets (great and little), herons and -- surprisingly, considering their endangered status -- black-faced spoonbills  We also saw mallards swimming on a pond, bulbuls, sandpipers, and snipes (which, in all honesty, I had thought was just an invented bird since I previously only heard them mentioned in Up!) and wigeons (whose name also sounded made-up to me!).


Individual highlights included two different types of kingfishers: one, a colorful bird with blue and yellow feathers; the other a black and white bird that was well camouflaged and so felt like a greater achievement to have spotted.  On the non-birding front: our group twice came across a mongoose -- an animal that I first learnt about as a young child from watching a lovely animated film adaptation of Rudyard Kipling's Rikki-Tikki-Tavi -- and the shutterbugs were uniformly thrilled to come across a pond full of beautiful waterlilies (which turned out to be close to the furthest point that we'd venture to at Mai Po that day).

Granted that there were quite a few times during the tour when I found myself wishing that my camera's zoom was considerably greater than 10X but I have to say that I had a pretty good time overall at Mai Po that afternoon -- and thanks in no small part to our assigned guide who proved to be charmingly amusing as well as genuinely informative.  And lest there be any doubt: I would love to visit that part of Hong Kong again -- and even go on the offered 7 hour tour next time! :)
Posted by YTSL at 11:26 PM

I always wanted to go there.

In Hawaii, there are mongooses everywhere. They look like anorexic groundhogs.

Thanks for the Mai Po tours link. I think they have revamped their website, I remember checking 2 years ago and it seemed like a nightmare to get on a tour! Did you have to book well in advance?

Your description of what mongooses (mongeese?) look like is most amusing! I thought the mongoose we saw resembled an elongated squirrel, only without the brushy tail! :)

My two friends and I booked about two weeks in advance. Is that well in advance to you? :b