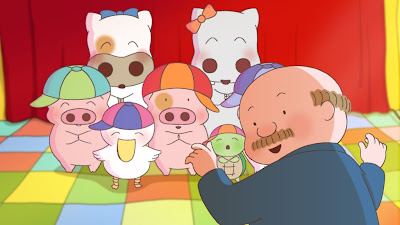 Mcdull and friends returned to the big screen in
Mcdull: The Pork of Music :)

Twenty-four years ago this year, Alice Mak created McDull, the piglet cartoon character that has captured many hearts in Hong Kong, Mainland China and beyond.  In 2001, the star of some 23 comic books made the leap to the silver screen with My Life as McDull, a film that I caught at the 2002 Philadelphia international film festival with a very receptive audience and have seen literally move adult viewers to tears.

Three years later, McDull, Prince de la Bun followed.  2006 brought McDull: The Alumni which combined "live action" with animation -- and did such as visually introduced me to the Hong Kong Sinfonietta (who had contributed music to the soundtracks of the Mcdull movies).  And in the summer of 2009, Mcdull made his first foray into the mainland with Mcdull Kungfu Ding Ding Dong.

If truth be told, none of the later movies could hold a candle to the first Mcdull film to my mind.  McDull, Prince de la Bun was moving but way too depressing for my liking, McDull: The Alumni was too muddled and McDull Kungfu Ding Ding Dong lacked "Hong Kong" locations and elements and, consequently, felt too generic and as though its makers had... if not "sold out" completely to the Motherland, then like they had agreed to too many compromises in order to be able appeal to Mainlanders.

So it was with a bit of trepidation that I went and attended an advance screening of McDull: The Pork of Music, which I knew to also be a Hong Kong-Mainland China co-production.  Fortunately, however, my fears proved unfounded for, among other things, this film's story is mainly set in Hong Kong and largely peopled by characters who attend, work at or are alumni of -- and live in the vicinity of -- the Chun Tian Hua Hua (trans. Spring Flower) Kindergarten in  Tai Kok Tsui.  And even while there are trips made across the border (to Shenzhen) and also to Macau in the movie, they are the kind of excursions that are very definitely part of the characteristic Hong Kong experience.

In addition, there are those very Hong Kong touches and in-jokes that those who "get" them will feel particularly pleased to see in the picture.  For example, the movie (that's helmed by Alice Mak's husband and regular collaborator, Brian Tse) begins with Mcdull and friends singing with a Canto-pop star referred to as "Perfect Andy" (and can only be the cartoon equivalent of none other than Andy Lau) at the Hong Kong Coliseum.  And there's a local politician in the movie whose appearance and bids to get votes elicited knowing laughs in the audience.

Geographical and cultural factors aside, McDull: The Pork of Music also is redolent of the sublime My Life as McDull in its somehow being able to produce something magical and moving from mixing together childhood aspirations and adult concerns, cute characters with bitter-sweet story elements, interesting visuals and a wonderful musical selection.  Actually, as befitting a film about a modest kindergarten headmaster with a gift for instilling a love of music in his pupils, the music in this work (which features original compositions by Ng Cheuk Yin -- who, incidentally, was the Hong Kong Sinfonietta's first Artist Associate) might be said to stand out even more than the visuals -- though that's not at all to say that the animation is not once again of a very high order.

Put another way: There's no question that Mcdull and his friends are visually cute and often amusing but the real beauty of this movie lies in its music -- and, also, its affecting story.  Also, while the little piglet and his kindergarten classmates do have prominent parts in Mcdull: The Pork of Music, its main focus actually is the headmaster (voiced by Anthony Wong Chau San).  Not only does his character get fleshed out in this film but it gets vested with layers of emotion -- and so much so that I didn't just shed tears of laughter while watching this enchanting movie (which I did do) but, also, tears that come from feeling genuinely moved by it.

I'm so glad you like this movie. You know I am a big McDull fan and I can't wait to view it with English sub tiles.

...and I'm so glad that someone finally commented on this review! (The stats counters tell me this entry has had a number of visitors but it seems no one was willing to comment until now!)