The big spiders hike. More than a year (and over 30 other hiking excursions) later, that's how I still think of the south-eastern Lamma Island hike that my hiking companion and I went on back in July last year.  Because we saw so many big spiders that afternoon that we stopped getting excited at the sight of time and we took to just pointing and generally walk by them without pausing to admire their very sight and size!

Something else I vividly remember was how difficult it was to climb up from sea level to just 136 meters above sea level.  At the time, we chalked it down to the heat of the day -- what with the temperature rising to around 33 degrees Celsius.  But later, we realized that it was because air pollution had played a part in our hiking difficulties and general discomfort.

Nonetheless, it's also true that we had a pleasant enough day out.  After all, we did get some exercise, saw some interesting sights and got to cap off the day with a nice seafood dinner at the justly famous and popular Rainbow Restaurant before getting a complimentary ferry ride back to Hong Kong Island courtesy of that dining establishment! :b 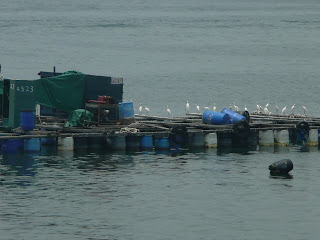 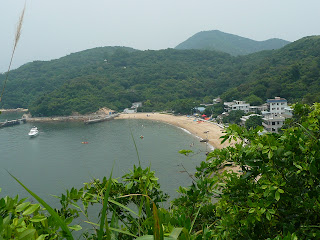 View of the beach and pier at Mo Tat Wan 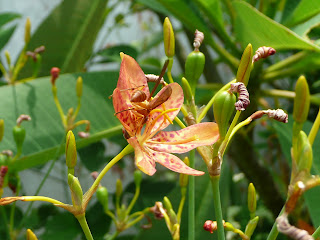 One of many bugs spotted on the hike -- in this case,
it's a bug intent on getting nectar out of a beautiful flower 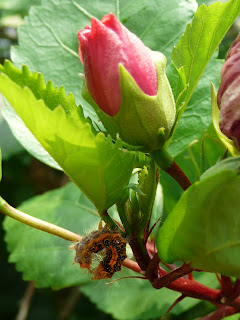 See the colorful caterpillar -- not just
pretty flower -- in this photo? :b 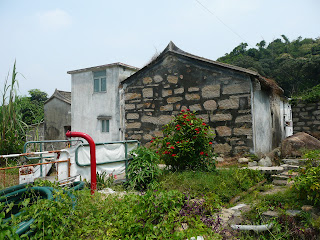 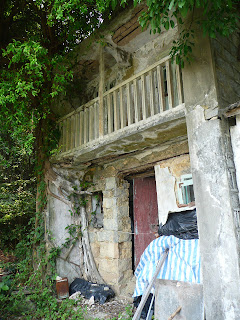 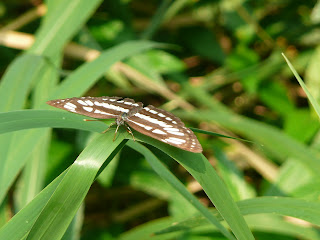 What looks to be a Common Sailor butterfly at rest 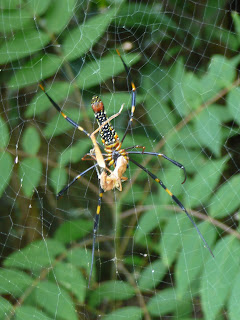 One of many big spiders spotted that day
-- with this spotting being special because
the spider's sizable food is also in the picture! :b

Very cool fauna with the pretty flora! Do I understand right that these are from your hike last year? Or did you have a new big spider hike? (Sorry if I'm missing something--it's very late and I should be getting to bed!)

You understood right -- I'm (that) behind in putting up hiking photo essays! (Sunday hiking photos and blog entries tend to cover more recent hikes though...) :S

Funnily enough, while I've seen a number of big spiders this summer, I haven't been on a hike where I've spotted as many big spiders as the Lamma Island one. That was seriously crazy! ;b

I scrolled through this one real slow! How funny. I read regularly from Deng Ming-dao's "365 Tao", a little Taoist book of commentary. This morning's entry was about how the spider is really the perfect Taoist creature. I'm workin' on it...

Awww... you're wary of big spiders? I love them for being so photogenic -- and reckon some of them have cute faces! :)

I did this hike last summer on my own and I was TERRIFIED by the spiders!

You must have gone to the same area around the same part of the summer as I did then! ;b

That's too bad that pollution made the hike harder but such an interesting place to hike. I enjoyed your shots and narrative.

Those spiders are beautiful, but also rather creepy! :)

Yes indeed re Lamma being an interesting place to hike. Thanks for checking out a non-Photo Hunt blog entry. (And for those who are wondering, I will be get back to Photo Hunting soon!)

I am getting to realise from comments on this blog that spiders creep out a lot of people much more than they creep me out! ;D

Actually, there is a spider in Hawaii called the "Happy Face."

The name of your hiking trip is scary enough for me! BIG SPIDERS??? LOL! But it's another beautiful place for photos :)

Woah, amazing! Thanks for sharing that info! :)

Seriously big spiders, and so many of them too! And yes, southeastern Lamma is another beautiful place for photos here in Hong Kong. :)

Hi YTSL, I really enjoyed your photo essay. Lamma Island looks like a wonderful place to visit. I must admit that I'm not a big fan of spiders, but I love butterflies. Your close-up photos are wonderful. Great detail.

I guess you can tell by my blog name that I do like spiders (and the webs they weave)... but yeah, I do like butterflies too -- though I often do wish that they wouldn't flutter by and, instead, would remain as still as many spiders tend to do! ;)