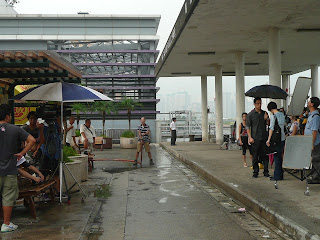 Guess what is the striped shirt-wearing man
in the middle of the photo getting ready to do? 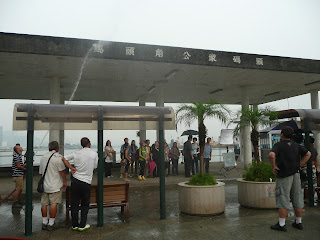 Earlier this evening, I had dinner with two relatives visiting Hong Kong who I haven't seen for ages -- not least because they have made their home in a part of the world (New Zealand) which I've just visited once in my life thus far.  At one point during our conversation, I was asked by my Scots-born New Zealander uncle if I liked movies made in Hong Kong and when I answered in the affirmative, he responded with an "aah, the films of Run Run Shaw".

Although I have found some Shaw Brothers movies to like (including The 36th Chamber of Shaolin and Heroes of the East), I was quick to tell my uncle that, actually, the great majority of Hong Kong movies I'm partial to actually are ones that are filmed outside of studio lots and in real Hong Kong locales.  From there, I got to telling them about "human-sized and -centric" works like this year's Floating City and how I really do get a kick out of learning more about Hong Kong through the movies -- and coming across places that had featured in Hong Kong films while going about my regular business in the Big Lychee.

Musing about our dinner conversation an hour or so later, I got to realizing that I hadn't told my relatives the thrill I get when I serendipitously come across a film (or even "only" a TV) crew in action.  Perhaps it's just as well -- since my film geekiness (and fanaticism?) might have freaked them out.


But here's going ahead and sharing just that by way of this blog entry -- since I have a feeling that quite a few of this blog's regular readers may sympathize, and even empathize, with my reactions.  In addition, here's also admitting that I do find myself sometimes on the look out when viewing movies for scenes that I might recognize as ones which I saw being filmed!

As might be expected given the state of Hong Kong cinema in the past few years, it's true enough that I've more often come across TV crews (like the TVB crew pictured above who were filming at Ma Tau Kok Public Pier last Saturday afternoon -- by the way, can anyone identify the actors in the picture(s)?) than film crews in action here in Hong Kong.  Still, I do reckon it's pretty cool to come across even a TV crew filming a scene -- and this especially when one does so in the very neighborhood in which one lives since it gets the imagination conjuring up all kinds of interesting possible dramatic scenarios playing out in one's part of the territory... ;b

Only twice on my visits to the fragrant harbour have I come across street filming, but the first one was on my very first visit outside a hotel I would later stay at in Tsim Sha Tsui. Ever since I've been hoping to see that scene in any of the HK movies I've seen afterwards!

How many times have you visited Hong Kong? To see filming twice already while just visiting -- rather than living here -- is quite something, I reckon! :)

What fun you must have coming upon a film crew in action. Did you stay and watch for awhile or has it become "old hat to you"?

In Hong Kong Years ago I had brunch at a restaurant where a film I'd recently seen had been filmed. I recognized the place as soon as we got there. You know who said to me, "Mom,please don't squeal too loudly.".

I stayed to take a few photos but ya, that was just for a few minutes. (I think it was a film crew with stars I could recognize and like, then I might have been tempted to stay longer... ;b)

And thanks for sharing the restaurant movie location story! :)

Six times so far, I'd love to happen upon a film shoot of real significance at least once. I've seen a few shoots in Toronto, the biggest of which was Kick Ass.

Wow, six visits to Hong Kong, not bad at all! And cool too re your having come across film/TV shoots in Toronto. :)