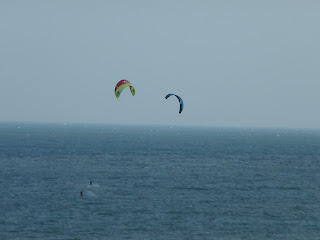 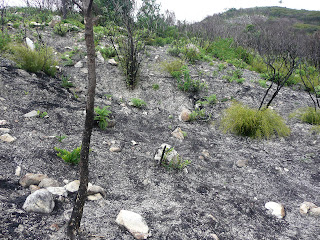 Observed while out hiking this afternoon:
regeneration and growth from out of the ashes

Earlier today, I went out hiking on Lantau Island with two friends. Although we all now reside in Hong Kong, on this day ten years ago, one of them had been living in Toronto, the other in Washington, D.C., while I myself had been living in Philadelphia. And, of course, wherever we were, all of us had been very much affected by the events which have collectively come to be known as 9/11.

On the morning of September 11, 2001, I was in my apartment in West Philadelphia. As was my usual practice, I switched on the radio to get the weather forecast. As I went about my morning routine, I only listened with half an ear to what was being said on the radio. But upon noticing after several minutes that the customary musical notes preceding a weather forecast still had not been forthcoming, I paid closer attention to what was being said and thus realized that news was being broadcast about a plane having crashed into one of the World Trade Center's Twin Towers.

At the time, I had a good friend who worked as a banker in New York City. Fearing that he was in the area, I e-mailed him to ask how things were over where he was. A few minutes after I sent off my e-mail to him, I got a reply from him in which he informed me that a second plane had crashed into the World Trade Center's towers.

Until I got that e-mail from my friend, I had thought that the first plane crash was a freak accident -- something along the lines of a trainee pilot having somehow steered his small aircraft into the iconic New York structure. But upon learning of the second plane crash, I got to having the chilled realization that these were premeditated terrorist attacks on the U.S.A.

It's such a cliché but in terrible times, one's instinct does seem to be to reach out to others -- to talk, share, for mutual support, etc. Soon after getting the e-mail from my good friend in New York, I called another good friend -- this one like me (then) based in Philadelphia. Upon finding out that she hadn't heard yet about the plane crashes, I asked her to turn on the TV.

While on the phone to her, I learnt about a third plane having been hijacked and subsequently flown into the Pentagon. And while we were on the phone and simultaneously watching the images flickering on our TV screens, we simultaneously -- along with millions of others in the country and around the world -- witnessed the twin towers becoming no more.

Amidst the shock and horror, I found myself thinking of my family (and wishing that they weren't physically so many thousands of miles away from me at that point in time) and friends, a number of whom lived and/or worked in New York and Washington, D.C. And I of course couldn't help but also think of the innocent victims of 9/11 -- notably the poor souls known collectively as "the jumpers" who the cameras captured and showed jumping from the Twin Towers, some individually, others hand in hand with people I presume were their loved ones, friends and/or co-workers.

Much more than even seeing the Pentagon walls having been breached, the plane wreck in Shanksville and even the Twin Towers collapsing, the images of those jumpers have haunted me (and many others I've spoken to who saw them -- even if "only" "live" on TV) and truly brought home that human lives were being unnecessarily lost in the whole terrible disaster. (And even while writing about them ten years on, I still feel chills down my spine and profound sadness with regards to them.)

Although in the early days, the news media definitely did include the jumpers in their 9/11 coverage, mention of them subsequently -- and quickly -- seemed to have become taboo for the most part. So it really makes for quite the shock that one segment in the strong emotion-evoking as well as thought-provoking 11'09"01 (AKA September 11) features film footage of a jumper's hellish descent to earth.

Viewing it, I cannot help but recall the words "Lest we forget". And also of the anti-war (and terror) motto and hope I found years ago on the Imperial War Museum of London's badge: "That the past will serve".

Ten years on, I think I can say with certainty that we have most certainly not forgotten. And I really do hope that the past will serve to, among other things, teach us valuable lessons about humanity -- including how many of us, living in different parts of the world, actually are empathetic beings who really can feel and care for others even if they're not related to us, not people we know personally and not from the same religious or ethnic group and/or of the same nationality as us.

Absolutely wonderful post YTSL, I've tried to follow the coverage today, but it's just too raw even ten years on. I know or knew no-one who lost a loved one so I can only imagine for the people who did.

Such a beautiful post, YTSL. I really loved reading it. Thank you.

It's my birthday today, actually, so it's a tough day to celebrate. I still do, though. I just don't watch any of the memorial coverage and just go about my day all smiles.

Thanks again for writing such a wonderful post. Cheers to you! =D

It was a horrible day to remember for the human kind. Sadly, most history is made up of events which human killing each other.

A very good post, and I enjoyed reading this :)

Thank you. I have to admit that I wondered how readers would react to this post -- because, among other things, it's not a typical post for this blog. Seeing your quick and positive response to me heartened me. And yes, it is hard to imagine how people who lost loved ones on 9/11 feel. The pain and horror for those of us who didn't is already pretty bad.

Happy belated birthday to you. Oh dear re your birthday being September 11th. It must be painful, especially in the USA. I wonder if you'd consider going on vacation outside of the country on your birthday? In any case, more power to you for being able to celebrate your birthday with smiles nonetheless.

I actually think there's a lot of history that doesn't involve killing. It's just that we too often tend to fixate on the violence and horrible bits. In all honesty, I think that human beings have done a lot of good. It just doesn't get celebrated enough, it seems.

Thank you...a nice contrast to the people who are preoccupied with conspiracy theories that we did it to ourselves on purpose.

I think (some) Americans like to think we control and cause everything...even the bad things.

Interesting suggestion/assertion -- and, to be honest, rather disturbing too. :S