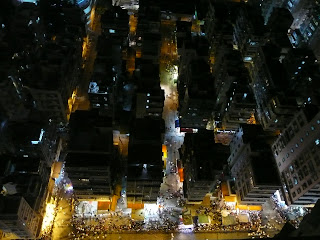 It was festival time in Tai Hang earlier this week 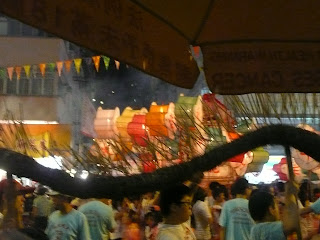 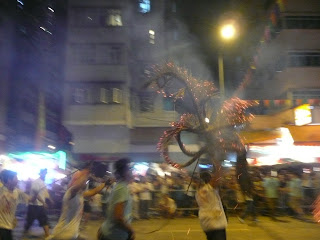 And if you didn't know or guess already:
It's the fire dragon that's the center of all that attention!
Years ago, when I was still living in Philadelphia, I encountered a Hong Kong fire dragon. To be precise, I came across a Hong Kong movie entitled Fire Dragon (in which the great Brigitte Lin Ching-Hsia played a fiery as well as deadly assassin known as the Fire Dragon) in a Chinatown video store full of Hong Kong cinematic gems on VHS tapes.

But it was only after I moved to the Big Lychee that I encountered the mighty Fire Dragon of Tai Hang. A smokey 67 meter long creature made of thousands of lit incense sticks along with stalks of dry straw and 'pearl' grass, it has been paraded through area streets annually -- bar for such as the years when Hong Kong was under Japanese occupation and in 1967, the year of major riots having occurred in the territory -- to celebrate its first appearance having driven away the plague from the community back in 1880.

Earlier this week, I went to Tai Hang for my third year of Fire Dragon viewing. (For reasons I actually can't remember now, I missed out on doing so last year.) This time around, I got to see the festivities from a different, higher viewpoint courtesy of a friend now living on one of the streets that the Fire Dragon parades along.

Still, much of what I got to see was as I remembered it from previous years: with the contemporary Fire Dragon being far more impressive than the earlier incarnation which can be seen in The Orphan, a 1960 drama starring Ng Cho Fan and an adolescent Bruce Lee that I viewed at last year's Hong Kong International Film Festival; and the whole affair being way better attended and crowded than the way it's depicted in Dante Lam's Fire of Conscience (2010).

For the record, the only cinematic depiction of the Tai Hang Fire Dragon festivities that looks like that which I've seen in real life is, ironically enough, a film that's mainly set -- and concerned with political intrigue -- in Taiwan. Still, while its director was born in South Africa, he definitely considers himself a Hong Konger these days. So I guess it does stand to reason that Laurence Lau's Ballistic does feature scenes -- though sadly short and few -- that do the Tai Hang fire dragon justice.

Considering how visually impressive the creature is and how fun and exciting the accompanying festivities are, I actually am surprised that the Tai Hang Fire Dragon (dance/parade) hasn't appeared in more Hong Kong movies, and more prominently too. Or is it that I just don't know about the films in which it has? If anyone knows otherwise, do please share the information (e.g., in this blog entry's comments thread)!
Posted by YTSL at 10:24 PM

Very cool! Glad you got to go see it again.

Thanks for reading my post and also checking out the links I embed into my blog entry. :)

I just wish that I could get really good photos of the Fire Dragon. It just moves too quickly for my camera (and camera taking ability)! ;(

Yvonne, can you tell if The 0rphan recreated the Fire Dragon for the movie (as Fire of Conscience did, which was why it didn't look authentic to any of us who've seen it live), or if they filmed the actual event? If the latter and it's from 1960, it's practically an anthropological document! (And if so, I'd like to see it.)

My sense is that the Fire Dragon in "The Orphan" was not recreated. Among other things, I don't think that older movie had the budget of "Fire of Conscience".

Also, the Fire Dragon didn't figure that prominently in the film -- rather, it was there as interesting background and also to denote the (festive) time of the year that a particular scene in the film took place. In the event, I think audience members being able to geographically place the scene as taking place in Tai Hang is/was a bonus. :)

Great photo from above. And like the baroness love the Tai Hang link.

Yeah, it was really cool to get that feel (from some 28 floors up). To be honest, it was a bit scary looking down for too long -- had this fear that I'd drop my precious camera when taking the photos from above! ;O

I've always wanted to experience the atmosphere of the fire dragon! I've seen it in movies and documentaries but have yet to have a chance to be there!

Which movies and documentaries have you seen the Fire Dragon??