Old as well as new movies 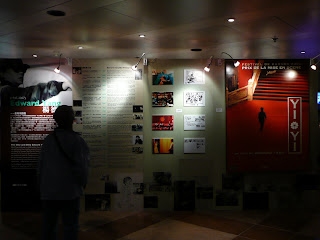 In 2008, I had the privilege of viewing
six films by the late Edward Yang
Wow, that was quick! Less than 48 hours after the deadline for submitting lists of top ten movies (and DVDs) viewed in 2008 for the Mobius poll, William Wilson had tabulated the results and put all submissions from Mobians up on the website. (Mine can be seen under my real name -- and for those who are unsure, YT are my first two initials! -- way down on this page.)

To complete the 2008 films list-making, here's figuring that might as well -- for the record and good measure -- produce a list of top ten old(er) movies that I viewed for the first time in 2008. So here it is, in order of the year of the films' original release:-

In Our Time (Taiwan, 1982) - Tao Teh-Chen, Edward Yang, Ko Yi-Chen and Chang Yi, directors of one episode each in this anthology

Oh, and should it not be amazing enough that I got to see all these wonderful films over the course a single year, here's also pointing out that I got to view every single one of them on a big screen over here in Movie Mecca! ;)

I may have already posted this but no harm in repeating: I only recently saw Burmese Harp as well for the first time and enjoyed the film quite a lot. My knowledge of Japanese cinema is limited beyond Kurosawa and Gojira and pinky violence films.

I watched Kon Ichikawa's Fires on The Plain which is similar to Burmese Harp in many ways afterwards and it's not quite as enjoyable -- maybe it's not meant to be?

Both films are commentaries on death and the meaning of death for the living/survivors.

Potemkin: I'm sure you had seen the steps sequence before 2008, right?

Don't know if you know this but I consider Japanese cinema to be my second favorite national/territorial cinema. To be sure, have a lot of it to discover and explore still -- but if your knowledge of Japanese cinema is as limited as you say it is, I'd like to suggest two directorial names to you: Miyazaki and Mizoguchi!!

Re Potemkin: Yeah, I had seen the steps sequence before but 2008 was when I saw the whole film for the first time.

You had me at "Battleship Potemkin". Back in the old, old days leftists in the USA would hold screenings of "Potemkin", to raise money. There were 16mm prints available. When I finally saw a good print on the big screen it was in some ways like seeing it for the first time.

Both parts of "Ivan the Terrible" are amazing on the big screen. It was difficult for me not to simply marvel at the gorgeous images that Einsenstein put together.

Thanks for the interesting info re American leftists screening "Battleship Potemkin" to raise money!

Re "Ivan the Terrible": have seen both but, really, even with that sudden bit of color, reckon II is not as enthralling as I.