On movie fans, plush toy lovers and anime as art 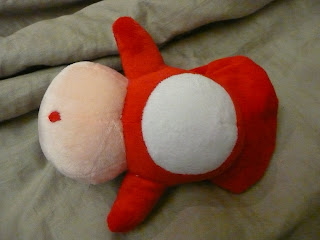 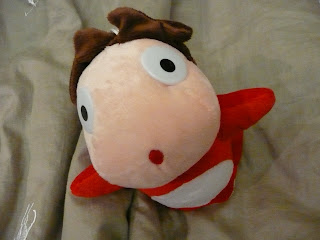 ...It's a Ponyo plush!
Maybe I'm just plain lucky... but while more than one friend here in Hong Kong has lamented to me that there are few fellow movie fans to talk to at work, I have had no such problem both at my previous and present place of employment. As an added bonus, I also have a fair few colleagues who are likely to gasp and oooh and aaaah when presented with the sight of such as the Ponyo plush I bought from a street vendor for HK$20 (~US$2.50) a couple of days ago and took to the office to use as a stress-busting device today.

About the only colleague who had negative reactions to the sight of my little Ponyo was an Englishwoman who only moved to Hong Kong a few months ago. Like another European friend, she's been shocked to find that in this part of the world, the kawaii like of Hello Kitty and co have fans among adults as well as children, and males as well as females.

When Ponyo On the Cliff By the Sea played in cinemas here, I managed to persuade that same European friend to take in a screening of the film with me. Still, minutes before we entered the theatre at the Broadway Cinematheque, she felt compelled to talk about how she couldn't quite believe that she was going to be viewing what she labelled as "a children's movie".

In the theatre, before the lights went off, I enquired whether she could see any children in the audience. As she looked around, she realized that there wasn't a single child in the theatre that evening. And that, instead, every single person taking in the Ponyo screening was, in fact, an adult. (And, also and not coincidentally, Asian.)

There is a school of thought which posits that anime comes out of an artistic tradition that stretches back to the Japanese woodcut tradition that counts the great Hokusai among its members. Another school of thought has it that anime came about -- or became particularly popular -- in Japan at a time when the country was in an impoverished state and its filmmakers craved to exercise their imagination and create science-fiction and fantasy films but lacked the budget to do so.

In any event, two things became clear to my European friend post watching Ponyo. Firstly, anime -- even kawaii anime -- isn't just for children. And secondly, it really isn't all that far-fetched to consider anime to be art. Especially anime that comes courtesy of the genius that is Hayao Miyazaki and his Studio Ghibli (and which boasts enchanting music courtesy of composer Joe Hisaishi)!
Posted by YTSL at 10:03 PM

LOVED the Ponyo Toy! I wish it was available here.

Lots of Ponyo toys on sale from street vendors here. In fact, would go so far as to say that these past few weeks, Ponyo plushes seem to be rivaling Hello Kitty ones in popularity!

It's taking a heck of a long time to come out on DVD.

I don't know the films, but I love that toy!

Such a great plush!!

In the US I think science fiction related toys, plush, etc aren't considered childish/strange to collect. I have a figure of Captain Picard from Star Trek Next
Generation that a friend gave me. Everyone I showed it to liked it but these same people rolled their eyes at my Totoro seat belt covers.

Japanese movies do tend to take a longer time to come out on DVD than, say, Hong Kong ones. And especially on DVDs with English subs.

Have heard that "Ponyo"'s slated to get released in the US with an English dub whose cast includes Matt Damon. Any chance of the original version of the film being screened at a film festival near you before then?

You really should check Miyazaki's movies. As an attraction: for some reason, Totoro (of "My Neighbor Totoro" fame) is known in Cantonese as "lung mao" = which translates into English as *dragon* cat... ;b

You don't know the half of it because my Ponyo plush is oh very wonderfully soft to the touch. :)

Know some (Western) friends who have a negative reaction to sci-fi but agree that even more seem to react negatively to the idea/visuals of anime/animation. :S

Glad you like. Maybe your dad will get you a Ponyo toy of your own... and also a legit VCD/DVD of the movie! ;)

why legit when illegit is available? hahaha

Let me give you a simple answer to your question: because if you keep on going for the illegitimate, one day in the near future, the legitimate and original items will disappear... and there will be nothing to view, enjoy and appreciate as well as for the pirates to copy and pirate from. :<

Will be in HK soon. I will look out for the Ponyo doll.

You're coming for HKIFF? In any case, don't think you'll have trouble finding Ponyo dolls to buy. (Also, you may like to know that they have Ponyo puppets for the same price!)

I want to get my hands on a Ponyo Toy!!!

Did your friend become a Ghibli convert now? :)

Aren't there Ponyo toys available in Singapore?? As for my friend: well.. slowly but surely -- she's also seen and liked "My Neighbor Totoro" now. :)

haha, I'm not sure, but that'll now give me an excuse to wander into any toy shop to look for it!

Good luck in your hunt for a Ponyo plush to call your own! :b