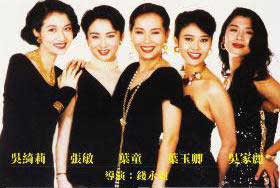 Back in July last year, I wrote an article that ended up being kept as a back up because it was non-time specific. For a time, I feared that it would never see the light of day. But now, I'm very happy to say, it finally has -- along with quite a few other pieces more recently written by moi -- in the latest issue of bc magazine! And yep, that article in question really is about prostitute dramas... and is one I hope you'll enjoy together with the other writings that I'm providing links to in this blog entry:-
i) My Name Ain't Suzie -- Hong Kong prostitute dramas;

ii) Solo Ho Show -- Not what you think but, instead, about a play entitled Ho Chi Minh in Hong Kong whose premiere I attended earlier this evening! :D ;

v) It's Not the Years, Honey, It's the Mileage -- Indiana Jones returns (soon)!;

vii) Review of Wong Jing's My Wife is a Gambling Maestro;

Additionally, although it's not written by me, I reckon that more than one of you will find it worth checking this feature article by Rachel Mok on the Yau Ma Tei Wholesale Fruit Market. :)

So have you finally seen My Name Ain't Suzie? It's far less tawdry than similar movies -- ones that purport to shine a light on the lives of prostitutes but in the end are exploiting that scenario for viewers.

It's a fine line and I think Whispers and Moans managed to be realistic without being too exploitative (I think that's why I didn't like it! LOL! I want the exploition sometimes!)

And while I will watch Wong Jing stuff I think it's probably unfair to compare him to Roger Corman; Corman managed to hire truly talented people AND he bought and distributed real, quality arthouse/foreign films in America while releasing b-movies to the drive-ins. He used his power for good. I get the impression that Wong Jing is just a factory making stuff, a lot of it crap, some decent -- it's just product.

But I do think that my love of American b-movies -- Corman, etc -- is what made it so easy to gravitate toward Hong Kong films; I admire the production line aspect that turns out that many films cheaply.

I'd rather sit through a Wong Jing flick and find one or two minor things to like than watch a $150 million Hollywood production and be bored the whole time.

Before anything else: THANKS -- and no need to apologize -- for the long set of comments! :)

And no, I've yet to completely see "My Name Ain't Suzie", I'm afraid. The thing is that from what I saw of it, it's one of those that I should keep for a rainy day. (Ironically though, have seen the latest movie by the same director -- the dog documentary, "This Darling Life"!)

Moving on: Hadn't heard the suggestion that Roger Corman used his power for good before. OTOH, agree with you that Wong Jing is more commercially inclined. But, hey, if he manages to entertain in the bargain, who's to fault him, right? ;b

So what else is on your 'keep for a rainy day' list? I probably have a similar list -- can't bring myself to sit through The Assembly yet, for example, and I've had the DVD for a month now it seems.

I probably overstated the Corman thing but this link mentions that he did distribute in America some big foreign classics.

So I couldn't tell from your review whether you liked Breeze of July or not. As much as I liked Monie Tung in Whispers and Moans, and Single Blog, I'll probably have to see it.

There's a lot of movies on "keep for my rainy day". Three Hong Kong movie examples are Ringo Lam's "Full Contact", King Hu's "The Valiant Ones" and Ann Hui's "Summer Snow". A couple which previously were on that list but I've seen over the past couple of years -- and am glad that I waited until I did because I got to see them a big screen: King Hu's "A Touch of Zen" and Yim Ho's "Homecoming".

As for "Breeze of July": Well, I'm trying to give it some slack as it's the director's first film and I did like the Shanghai parts. So... howzabout 6-6.5 on the brns.com scale?