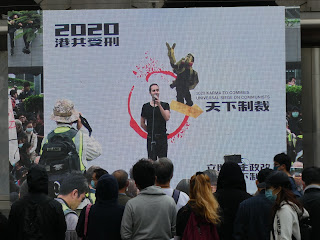 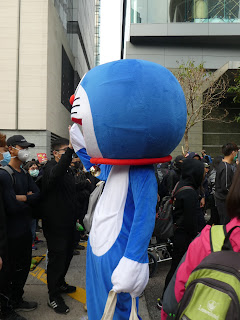 Doraemon trying to put the crowd at ease as they were
leaving, upon the request of rally organizer Ventus Lau


Last Sunday, I attended a protest rally at Edinburgh Place that was meant to be a warm-up of sorts for a protest march to be held today.  After the police refused to issue a letter of no objection for the provocatively-named Universal Siege on Communists March though, the organizers went ahead instead with a protest rally at Chater Garden, with the understanding that the spillover crowd could also be allowed to occupy the adjacent spaces such as Chater Road and the square where the Cenotaph is located.


As I made my way into Central this afternoon by bus, I not only passed by lots of cops (including Raptors as well as "regular" riot police) along the way but also noticed that, even 20 minutes before the official start time of today's rally, Chater Garden was already full.  And after we saw that sections of Chater Road as well as Statue Square were being utilized by Filipino domestic workers on their day off as well as protestors, my friends and I decided to base ourselves at the Cenotaph, from where we also were able to get a good view of a giant screen on which was beamed the proceedings taking place in Chater Garden, just a hundred meters or so -- but hundreds, if not thousands, of bodies -- away.


With this afternoon's very well attended -- as it turned out -- Siege of Communists rally having been set up at just a few days' notice, the roster of speakers seemed weaker than the previous week's (with, among other things, few of them sticking to the announced theme; with the result being that the rally turned out to be more of a general "five demands; not one less" and anti-police -- rather than anti-Communist -- protest).  Or maybe they were just the warm-up acts for the main guests.  We will never know, however, because shortly after Joshua Wong had stepped onto the stage at Chater Garden, but before he could really get going with his speech, people were being told to leave the area and head for Admiralty.
Actually, from my vantage point, I smelled trouble about 70 minutes into today's event.  First, I noticed that the number of riot police stationed across the street by City Hall rapidly increased within the span of about 20 minutes.  Then, with the help of my camera's 30x zoom lens, I got to seeing that the crowd on an overhead bridge to the west of us had turned their backs to us and were finding more interest in things that were happening to the west of them.  And shortly after, there came calls for long umbrellas to pass on over to the west.


Consequently, when the call came for people to start leaving, my friends and I -- along with a good part of the crowd, as it so happens -- opted to make our way eastwards towards Admiralty where I, for one, was hoping that I could hop on a bus home.  But as we went about doing so, very slowly since there were a lot of us -- some in wheelchairs and others carrying young children, to boot -- trying to go in the same direction at the same time, we heard the sound of a number of rounds of tear gas being fired as, once again, the police didn't seem to realize, understand or care that it really takes a large crowd a good amount of time to disperse even when that is exactly what the members of the crowd are seeking to do!


From the reaction of some members of the crowd to this, I'd say that a number of them didn't previously have the experience of having tear gas fired in their vicinity.  Either that or the added sight of riot police appearing from various sides to block off a number of possible exit points really freaked people out because I was half-expecting a fatal stampede to happen at various points.  Fortunately, there were calmer heads about too -- and after shouts asking people to calm down and count their steps as they walked (which really does calm and slow people down), those of us not pounced on by the police did manage to safely make our way to Admiralty and points further east.


Yesterday, rally organizer Ventus Lau had pre-warned attendees to not expect a carnival today. "Given past experience, no matter how hard we try to protect our participants and no matter how many marshals we have, we still can't control the actions of the riot police. They are losing control and losing their minds," he was quoted as saying.  How prescient he proved to be.


As many of us who were present only learnt after the fact, a plainclothes police officer had gone onto the stage and demanded that Lau call the rally off.  Lau, in turn, had demanded that the man show his police warrant card.  The man refused to do so for a few minutes and chaos had ensued, with matters not being helped by other police officers not giving much advance notice at all before they commenced their firing of tear gas into the crowd (or, for that matter, bothering to give a good explanation why the entire rally was being called off hours before its scheduled end time).


Watching what happened from free Taiwan, Ryan Ho Kilpatrick (who's normally Hong Kong-based) was moved to Tweet about his shock at realizing how much he had, unconsciously, become desensitised over the months and accepted all this as normal.  I was struck by this because it sadly is too true that I too have become used to hearing tear gas being fired, smelling it, and expecting for not getting much, if any, warning of this odious substance being inflicted on a crowd of predominantly peaceful protestors and bystanders who happen to have the misfortune to be in the area; so much so, in fact, that I go to even "police approved" protests equipped with protective gear.


Adding to the insanity of it all: Ventus Lau was arrested this evening in front of bewildered reporters who had just finished interviewing him about the rally being cut short by the police.  Apparently, in their eyes, he had incited them by doing what's actually perfectly legal: that is, asking for the man who had gone onto the stage and demanded that Lau prematurely terminate the rally to give proof that he was, in fact, a police officer.

Secondly, it seems Lau had violated the terms of the police's "no objection" to the rally by having allowed too many people into Chater Garden.  In other words, one of the reasons for his arrest was because too many people had showed up to the rally -- which definitely did attract a heck of a lot more people than last week's, with 150,000 having been in attendance according to organizer estimates!
Posted by YTSL at 11:30 PM