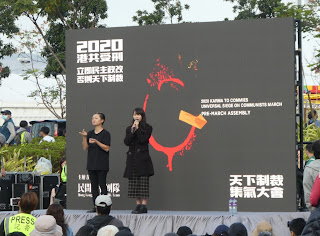 Agnes Chow was among the speakers at today's protest rally 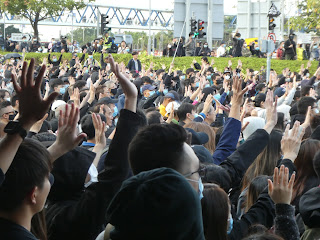 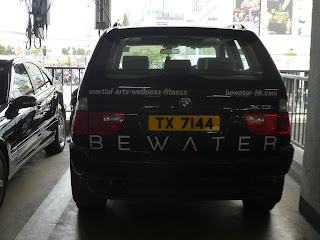 Coincidence or not?  A car with the famous Bruce Lee saying-
turned-protest-strategy parked near today's protest site
While Taiwan was holding its General Elections yesterday (and showing how much they cherish the democracy they possess), Hong Kongers were continuing their protesting -- with the day's activities scheduled to revolve around the territory's many Lennon Walls.  But while some neighborhoods saw new posters and messages go up on their Lennon Walls, the attempts to add or resuscitate these spaces in other areas were curtailed by the presence of police officers who now are not beyond arresting people for working on a Lennon Wall.
In view of their looking askance at these peaceful -- as well as creative -- means to protest, I must admit my surprise that the police issued a Letter of No Objection for today's protest rally; this not least since its provocative title includes the words "2020 Karma to Commies: Universal Siege on Communists".  In addition, some advance publicity for it on Twitter and at least one Lennon Wall had made it look like it'd be a rally for Hong Kong independence -- a perspective that looks to have picked up a number of adherents in recent months but actually remains very much a minority opinion among Hong Kong pro-democracy protestors.
Worrying that the event would turn out to be a police trap of sorts, I took a longer time to decide whether I'd attend this afternoon's protest than I do for most protests.  And upon seeing a significant police presence in the vicinity as I made my way to the rally's venue, I did wonder whether I had made a mistake by going there.
It didn't help matters that I spotted a good number of Hong Kong Independence, American and British flags being waved by event attendees as I neared the main event space.  But as I settled down and got to realizing that one of the main ideas behind today's rally was to emphasize that fight for Hong Kong is being waged internationally (with speeches being given by such as Hong Kongers who are British National Overseas Passport holders and representatives of overseas communities, and videos made of rallies in support of Hong Kong's fight for democracy and justice by people in Canada, Australia and elsewhere), the presence today of the foreign flags -- which I belatedly realized also included ones from the likes of Taiwan, Japan and Germany -- made more sense.
The Hong Kong Independence, American and British flag contingent appeared to attract photographers' attention the most but take this from someone who was there today:  the majority of attendees at this rally did not have a flag in their hand.  Also, the country whose mention got the most cheers today was Taiwan; whose people -- and record vote-getting president's -- support for Hong Kong pro-democracy protestors and our cause many people here cherish and will not soon forget.
Something else that both a friend who separately attended the rally and I noticed (but have a feeling won't figure much in media coverage of the event): there was a good number of gray-haired folk in today's crowd.   On a not unrelated note: the gray-haired contingent (also) make up a significant number of people who can be found checking out what's posted on their neighborhood Lennon Walls.
I suspect that this is because some of them are less internet and social media savvy than the younger folks, and, consequently, find it harder to come by protest news and information disseminated via the likes of Twitter as well as international publications (which literally may be foreign to them).  So, in view of work on the Lennon Walls being curtailed by police threats, if not actual actions, it's good that protest rallies like today's are continuing to take place and thus providing this not insignificant section of the Hong Kong protest community with alternative means of information besides TVB and newspapers, too many of which have pro-Beijing affliations as well as biases.

More than incidentally, today's protest rally is meant to be a prelude for a protest march with the same anti-Communist theme next week.  The letter of no objection application for that is still pending.  But based on today's event, there no good reason why it shouldn't.  And having seen and heard for myself what the organizers are trying to achieve (which actually is not at odds with the five demands), I, for one, am planning to support their event and actions.
Posted by YTSL at 11:59 PM