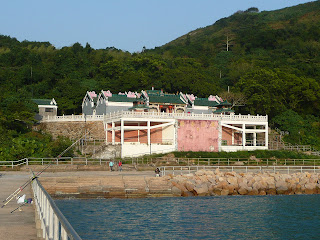 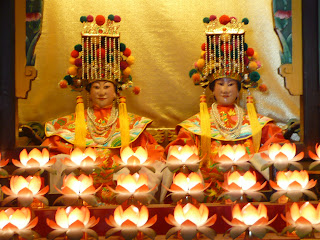 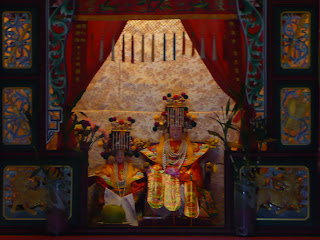 Earlier today, a friend and I hiked the High Junk Peak Country Trail -- he for the first time, and I for the second.  As on my first time, we added a visit to the Joss House Bay and the Tin Hau temple there that is the oldest and largest in Hong Kong.

Built in 1266, it has been extensively renovated -- so if truth be told, it really doesn't look all that old and all.  Indeed, the first time I visited it some years back, there was scaffolding pretty much all around and obscuring it -- so I ended up not bothering to put up any photos of the temple until after my second visit to it.  At the same time, I wasn't so put off that when I had the opportunity to visit the temple once more on Tin Hau's Birthday in 2010, I actually took a day off from work in order to do so.


As with the Lin Fa Kung Temple in Tai Hang though, it was only on this most recent visit that I discovered that the Chinese Temples Committee had relaxed its stance towards photography and now allows photography inside the temples it administers so long as photographers don't use a flash or tripod.  Put another way: I finally was able today to take photos of the impressive interior of the temple alternatively known as Tai Miu (i.e., Great Temple in Cantonese)!

Given its out of the way location, I'm sure that that the temple and Joss House Bay in general gets few casual visitors besides hikers and amateur anglers (quite a few of whom appear to favor the pier in front of the temple as a fishing spot).  At the same time, as was witnessed when we visited today, there are devotees to Tin Hau who do make the effort to go out to this particular location to pray to the Goddess of the Sea on "regular" days as well as on her birthday.  Considering that there are some 70 temples dedicated to Tin Hau in Hong Kong alone, I find that pretty impressive and interesting.

Incidentally, when looking at the list of temples on Wikipedia, I'm surprised to see how many of the temples I've been inside!  More specifically, I've come to realize that I've been to Tin Hau temples in the Tin Hau area east of Causeway Bay, Shau Kei Wan, Cheung Chau (two, in fact), Pui O and Tai O (on Lantau), Sok Kwu Wan (on Lamma), Peng Chau, Po Toi, Lei Yue Mun, Lung Yeuk Tau, Sai Kung town, Aberdeen, Stanley, Shek O, Tap Mun, Tung Ping Chau and Yau Ma Tei's Temple Street -- and yes, many of them I've come across thanks to my hiking as much as I've done in the territory! ;b
Posted by YTSL at 9:39 PM

We don't do much hiking around here now...we got a 2 feet of snow in yard.
I found the first picture interesting it made me to take a second look.

Merry Christmas and the coffee is on.

My days of seeing snow in winter are pretty much gone -- and I have to say that I'm really happy that's the case! Am glad you found the first photo interesting -- hope it was the case with the second and third photos too. :)

As a fan of Tin Hau Temples I'm glad indoor photos are now permitted at this temple. Really like the third photo. Merry Christmas too.

Hooray for the Chinese Temples Committee changing their policy re photo-taking in the temples they look after! And happy holidays to you! :)