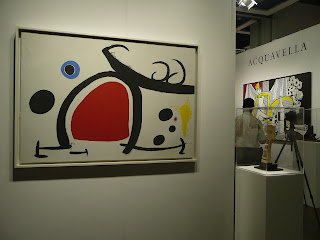 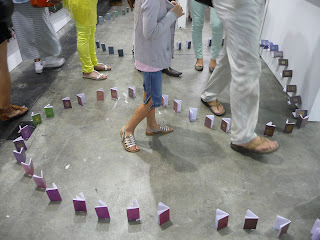 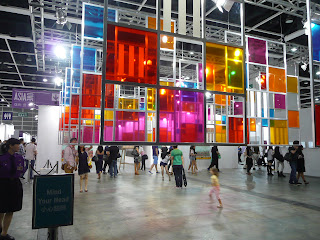 Other works -- such as Daniel Buren's Photo Souvenir:
From Three Windows, 5 Colours for 252 Places --
at the art fair appeared to invite audience interaction 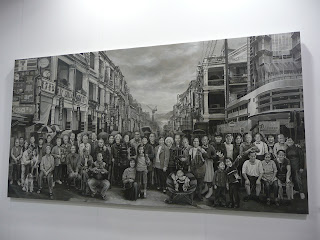 Yesterday and today, I've spent some six hours at Art HK, the Hong Kong international art fair that's grown better as well as bigger by leaps and bounds each year since its founding in 2008 as the Asian art and gallery focused Hong Kong International Art Fair. What with this year's edition featuring displays of works from 266 galleries from 36 international territories (including but by no means restricted to Hong Kong and Mainland China), there's no disputing that it literally was a huge affair -- and even the most cursory view of the art on display should convince people that this art fair is (now) a big (Cultural) deal.

For starters, whereas not so long ago, it was considered a really big deal to see a single work by Pablo Picasso or Damien Hirst at the art fair, visitors to Art HK 12 were able to view several works by major artists -- including, yes, Picasso and Hirst along with the likes of Edgar Degas, Jeff Koons, Roy Lichtenstein, and Gilbert & George.  And while I spotted just one Ai Weiwei work at the art fair, Cong is a mammoth affair that leaves quite the emotional and political impact -- seeing as it consists on one side of 123 framed letters received by Ai Weiwei Studio from various mainland Chinese government ministries regarding his investigation of the 2008 Sichuan Earthquake and on the other of the name list containing the names of the 5,196 students who died in school buildings that collapsed as a combined result of the earthquake and poor construction methods.

Maybe it's my imagination but my sense, by the way, is that Art HK 12 contained fewer overtly political works than at, say, Art HK 09.  Instead, at the same time as there were a noticeable number of works by big name artists this year, there also looked to be a large number of works that did seem like they would be more at home in private residences rather than public museums, particularly those museological institutions out to make or offer up political(ly charged) statements.

Put another work: Quite a few works at this year's art fair looked more like decoration than salient pieces of art.  Of course, having said that, it's not impossible -- witness Takashi Murakami, with his smiley flowers -- for works of art to both decoratively appeal and also have a significant artistic (and emotional) impact.  However, as a perusal of many of the works on view at Art HK 12 would have shown, it's really not that easy to simultaneously achieve all this!

And lest it be thought that it's only works by big name artists that stood out and claimed people's attention, here's pointing out that one of the more attention-grabbing works at Art HK 12 was Indonesian artist Tintin Wulia's Lure, an installation work whose components included a number of miniature "passports" laid out in a a winding line and attached to walls as well as on floor space -- the latter of which threatened to be stepped on and otherwise physically wrecked by many a visitor to the Osage Gallery's space at Art HK 12 as well as forced other visitors to literally watch their step and amend their movements within that space!

While I did stop and spend some time amusedly checking out that creative work -- and even more time watching other people effectively interacting with the fun installation (which also included a claw vending machine with which people could try their luck at procuring one of those miniature "passports"), it was the work of Navin Rawanchaikul on display at Singaporean gallery's Yakuz Fine Art's booth that left the strongest impression on me.

First time exhibitors at Art HK, Yakuz Fine Art opted to focus on the works of just one artist this year.  Approaching the booth, the first of Navin Rawanchaikul's works that caught my eye and attention was There is No Voice (3). A mixed-media work that looks like a glass cabinet with hundreds of small glass bottles inside, each of them containing a photographic portrait of a different individual, it got me thinking that there were spirits and essence of (deceased) people encased in each and everyone of the small bottles!

Less immediately eye-catching -- yet turned out to leave quite the impact on me -- was a long letter written by the artist to, I'm assuming, his wife -- which lyrically laid out why he was in Hong Kong at the time (February of this year) and what he had been going out doing: namely, researching and working on the Hong Kong section of his A Tale of Two Cities presentation that includes two large acrylic on canvas panoramic group portraits of members of Hong Kong and Chiang Mai (his home city)'s small traders that had pride of place in the booth.

The son of a small trader himself, Navin Rawanchaikul's works focusing on what Hong Kongers would refer to as "small potatoes" (i.e., the hoi polloi) come across as imbued with care and love.  And while he is a foreigner in Hong Kong and can feel a foreigner in his native land on account of not being ethnic Thai, there is no doubting the respect as well as affection for his subjects that comes through in the artist's evocative works, and -- this is why I felt so touched -- that this all sincerely comes from the heart.