Shortly after I moved to the Big Lychee, I heard comments to the effect that Hong Kong is a cultural desert. More than two years on (and yes, it's been that long -- as the proverbial "they" say, time flies when you're having fun!), I can't help but wonder what planet those people are on.

For those wondering how big a deal the Hong Kong International Art Fair is: consider that some 120 art galleries from 24 countries had exhibits at this event that was held at the Hong Kong Convention and Exhibition Centre. Put in another way: I spent several exhilarating hours checking out the fair yesterday afternoon and still regret that I didn't spend more time doing so.

One thing I didn't regret was that, despite a sign near the entrance saying otherwise, people seemed free to take photos inside the huge hall as well as outside of it. Hence my being able to offer up the following set of shots for your viewing pleasure:- 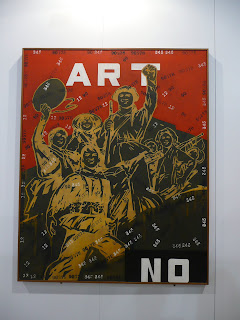 Even if at least one artist (Wang Guangyi)
seems to be saying so,
no way is it a case of say "no" to art! 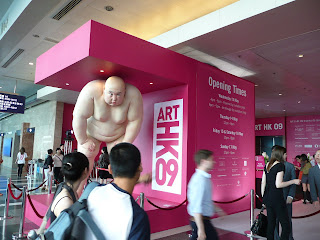 Not when there's art that intrigues,
including this eye-catching large figure
at the entrance to the art fair! 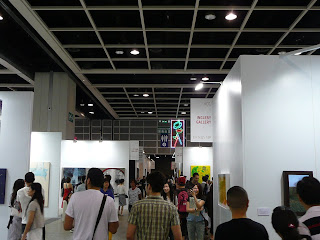 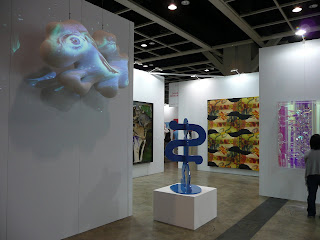 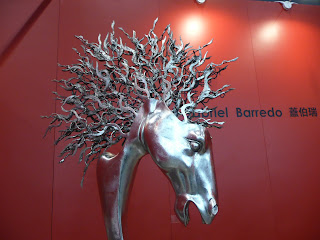 Still photos can't do justice to Gabriel Barredo's works
as they have components that move
(in the case of this horse head, it's the mane!) 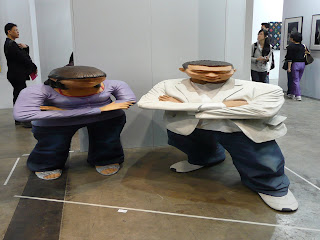 Other art pieces -- like this pair of sculptures
that I heard someone describe as "like images
from a hall of mirrors" -- didn't need
moving components to attract attention! 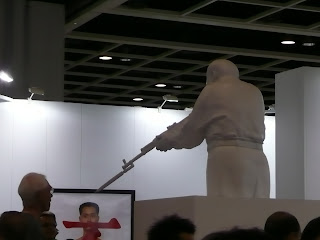 With still others, however, it was more
the inadvertent interaction they had with art fair goers
(and other works) that I found more interesting! ;b 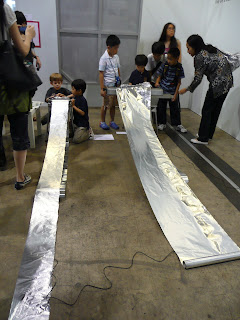 The interactive work by Ay Jyoe Christine
that won the SCMP Art Futures award
attracts the attention of young art fair goers
-- and, in the process, seems to give concrete proof
that art (appreciation) does indeed have a future :)

Looks like a lot of fun! And what a great way to encourage people to experience art.

A gallery I almost always visit when I'm in Hong Kong is Grotto Fine Art, which represents a HK artist that I absolutely love, Wilson Shieh. I've also seen a couple of good shows at the Hong Kong Museum of Art.

Yeah, I'm also perplexed when people think that there is nothing to do in HK besides shopping!

It was a lot of fun... and proof that art isn't always stodgy (or plain incomprehensible)!

Re Wilson Shieh: some of his works were on exhibit at the HK International Art Fair too (as was Chow Chun Fai's). And funny that you associate him with Grotto Fine Art as his most recent solo exhibition -- Chow Yun Fat's Fitting Room -- was at Osage Soho.

Thanks for that link to Wilson Shieh's new show! I'm so bummed to have missed that, but when I visit HK in a few months I'll drop by Osage Soho to see if they happen to have a catalog. I love that "paper doll"-like painting of Chow Yun Fat. Did you see the exhibit?

Regarding the "cultural desert" comments--knowing nothing about the background/ethnicity/nationality of those who said that, it seems they are from the planet of "Art by Dead White Guys".

For many if not most people, at least in the U.S., culture is the celebration of 17th to 19th Western European civilization, symbolized by an opera company, a symphony orchestra, a ballet company, a great museum and a world city should have world famous examples of them.

Hong Kong has a great ballet company but its other institutions of ossified and elevated (and Western) art are not in the same class.

Which, of course, makes all the sense in the world.

I may be totally off base on this--those who made the desert comment may have been Chinese people who were referring to stuff that I don't even know exists--but it just sounded like what, for example, anyone in New York City says about the rest of the U.S.

This is, by the way, from a lover of Italian and German opera, Russian and French ballet, and most symphonic and chamber music of the Western canon written before 1914. :-)

I think Osage Soho still have a catalogue because, if I'm not mistaken, I saw it on display at their stall at the HK International Art Fair! :)

As for the exhibition itself: I have to confess I didn't see it "in the flesh" -- but because of my job, got mailed a whole lot of JPEG images of Wilson Shieh's works. So feel like I did see a good amount of them... ;b

I agree with you that those "cultural desert" comments came from residents of "the planet of "Art by Dead White Guys""! :D

Interesting to read your opinion that HK has a great ballet company. I also think it has very good classical music -- both of the Western and Chinese nature -- options and (Cantonese language) drama/theatre along with cinema.

"This is, by the way, from a lover of Italian and German opera, Russian and French ballet, and most symphonic and chamber music of the Western canon written before 1914. :-)"

I can remember when you moved! It doesn't seem possible. :)
I don't get to as many art exhibitions as I would like, and this one seems especially interesting. I'd love to see the horse with the moving mane. The photo alone looks beautiful.

Wow re your being able to remember when I moved -- put it another way: count yourself as a long time visitor to this blog! :)

And re the horse with the moving mane: the artist had a bunch of other amazing works. Really found his pieces very impressive.

Gosh. Did tt take place recently?!! I was supposed to be in HK last wkend! But alas!

The art fair was last week -- to be precise, Thursday through the weekend. Sorry you missed it!