From the South Lantau Country Trail to Pui O (photo-essay)

In many hikes I've been on here in Hong Kong, one or two things about each of them will stand out and stay in the memory.  In the case of the late spring hike that began with my hiking companion and I going along the section of the South Lantau Country Trail west of Pak Kung Au, they were the steep descent down over 250 meters over the last kilometer or so of it and the part of the trail that passed an area where there were so many cicadas making such loud noises that it felt like their incessant humming was causing our ear drums to vibrate really uncomfortably!

I wish I could have recorded those loud cicada sounds -- but you'll just have to take my word for it about them.  Alternatively, here's beginning this photo-essay with one more view of the steep descent -- and a couple close-up shots of at least one of those noisy cicadas that were far easier to hear than actually spot, never mind photograph... ;b 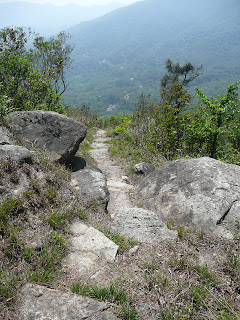 As someone who suffers a bit from acrophobia,
this steep section of the trail was
one I had to take my time descending 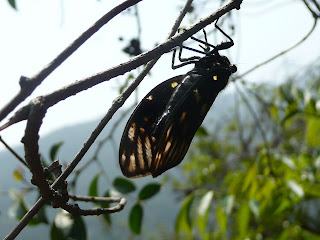 A close up shot of an insect that's much smaller than one is likely to
think it is upon hearing the loud sounds it's capable of making! The same type of insect viewed from a different angle 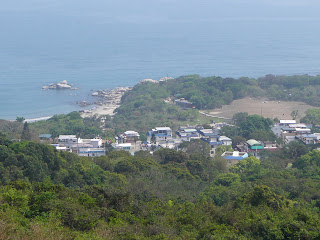 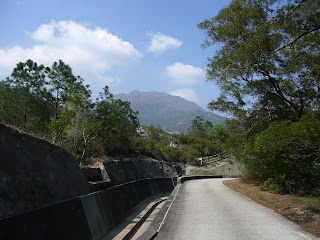 Running along a catchwater, this flat and concreted
trail nonetheless isn't without some nice views 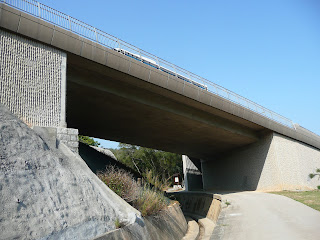 Something that few people in the buses passing overhead
realize: part of the trail also happens to run under Tung Chung Road,
the one roadway that connects north and south Lantau! :b 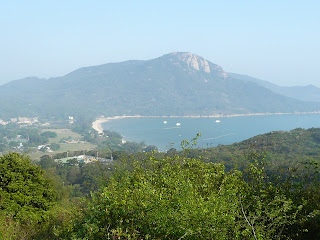 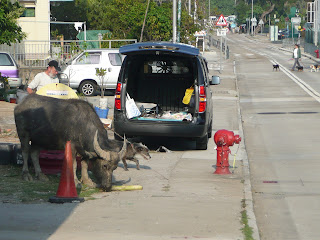 One of Lantau's many feral water buffaloes at ease
near our hike's end at Pui O -- and for those who
didn't realize, yes, this really is Hong Kong :)
Posted by YTSL at 11:09 PM

That looks like some hike! We have peepers (chorus frogs) here in the spring and they can be pretty loud in the evenings.

It was indeed some hike. So enjoyable I definitely would be up for going on that same trail again. :)

Re the peepers: are they big? In any case, it really can be amazing how not so big creatures can make such loud noises! ;b