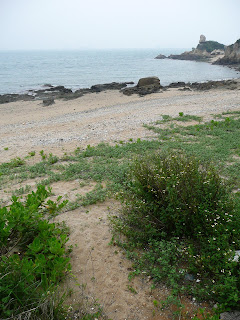 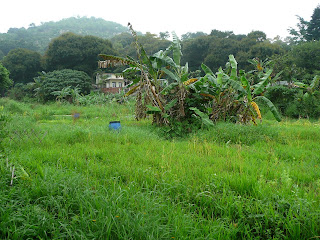 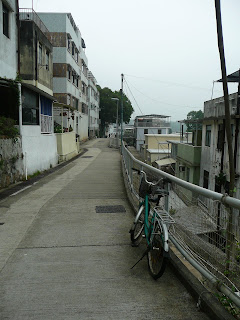 Famously low crime as well as car less,
Peng Chau is the kind of place where biking and
walking are the favored means of transport --
and where bicycles don't seem to need to be locked!
"Hong Kong is hectic, crowded and noisy". Thus proclaimed an article on Asia's World City that -- to be fair -- also noted that "Hong Kong is far from just a metropolis full of looming skyscrapers".

But just a less than hour-long ferry ride away from Central, the Hong Kong district where many of the territory's most famous skyscrapers are to be found, lies a part of the Big Lychee where one can easily get away from the madding crowd. Indeed, when I visited Peng Chau earlier today, I found myself alone for much of the time that I was there -- and the predominant sounds I heard were the twitter of birds (and the waves in the areas near the shore) rather than the chatter of my fellow humans or any noise issuing from machines.

Granted that today may have been a quieter Sunday than usual on Peng Chau by virtue of the weather being on the cloudy and gray side, with some drizzles earlier in the day doing their part to make people not want to go anywhere outdoors, and especially not a part of Hong Kong whose main leisure activity may well involve hiking along a series of admittedly not that difficult trails.

Although it's true enough that today's weather was not ideal for hiking (not least because it was very humid -- so much so that ascending Peng Chau's two highest hills today caused me to sweat buckets) nor -- for that matter -- picture-taking, I'm nonetheless glad that I paid my first ever visit to the island today. For one thing, it allowed me to do what I was hankering for: to temporarily get away from other people and feast my eyes on calming green scenery, a smattering of beautiful flowers and some wildlife (including a bird of prey that flew in the sky high above the island, several swifts, some yellow and brown-spotted butterflies, and a number of smaller, predominantly white members of the same insect species).

For another, I found Peng Chau to be another of Hong Kong's outlying islands with its own distinctive charm. For whereas Cheung Chau has a more bustlingly touristy feel on weekends, Lamma's Sok Kwu Wan can seem to be nothing else than a row of seafood restaurants, that same island's Yung Shue Wan has an expat hippie vibe and islands such as Po Toi and Tung Lung Chau look to no longer be home to a substantial community, Peng Chau comes across as having a genuine (sense of) rural island community of the sort that has become thin on the ground in the rest of Hong Kong.

In short: Just four kilometers away from Hong Kong Island is a place that can feel like a whole other world from the stereotypical Hong Kong that "never stops", never mind "never sleeps". And seeing that being in places like this helps me to de-stress, I thus am very grateful indeed for their existence within the Big Lychee! :)

Thanks for brining Peng Chau to my attention, YTSL! The photos alone have a calming effect. And I love that the tallest spot on the island is called Finger Hill. Very charming!

Am glad I got you interested in checking out the island. :)

Yay re the photos having a calming effect on you. Re Finger Hill: There's a rock up there that resembles a finger... at least to me. Maybe that's how it got its name! :b

The photo with the unlocked bike on the sidewalk is really lovely. That part of Peng Chau (other than the trees in the background) could be any low-key tropical seaside village that serves as a home for people instead of a tourist destination.

Just a few cosmetic changes--shabbier, more peeling paint, no air conditioners--it could be in Cuba; tarted up a bit with bright paint, fewer overhead wires and a more elegant fence it could be a middle class enclave along the Mediterranean.

Not sure exactly why but I really like that picture

Find your thoughts re how one of the pictured parts of Peng Chau can look like Cuba or a middle-class Mediterranean enclave with cosmetic changes to be very intriguing! Since I haven't been to Cuba and the only part of the Mediterranean I've been to is Istanbul, I'll take your word for it! :)