Sha Lo Tung: Back to Nature? 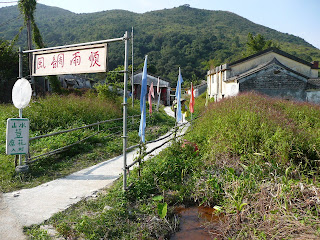 You'd think that a place with a tofu fa stall
(albeit one that's only open on weekends)
would be buzzing with life... 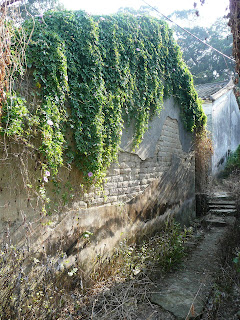 But, really, much of Sha Lo Tung is not only
abandoned but now also very overgrown
Two springs ago, two friends and I went on a hike that took us to Sha Lo Tung, a largely abandoned village nestled in a valley bordered by Cloudy Hill to the west, the Pat Sin Leng mountain range to the east and Hok Tau Reservoir to the north. Because it was late in the afternoon when we got there and we didn't want to end up hiking in the dark, we didn't spend as much time exploring the scenic area as we would have liked to. So I resolved to go back again some day.

A few days ago, I fulfilled my wish to go back -- this time with a different friend along for the hike. As we neared Sha Lo Tung, I got to noticing that the path there from Hok Tau Reservoir was way more overgrown than the last time I was on it but was not unduly bothered by that -- and, in fact, thought that this state of affairs made things even more scenic than previously. In addition, the preponderance of natural growth (in what used to be farm land) looked to have attracted a large number of dragonflies and butterflies -- since we could see a number of them flitting about and flying overhead as we made our way into the center of the village area.

However, the nearer we got to the center of Sha Lo Tung, the more we discovered that ants happened to have been another species of insects whose population had sizeably increased -- and that they seemed uncommonly attracted to my friend (who, not incidentally, had not sprayed any insect repellant onto her feet, legs and other extremities before the hike). And even though I had put on quite a bit of bug spray on me, it still was hard to ignore the large numbers of ants crawling about the place -- and that seemed to like to congregate in areas where I would have liked to have been left unbothered to leisurely compose and take my photos.

But although my camera may not have recorded it as well as I would have liked, my eyes definitely observed that buildings that less than a year and half ago I could get near and peer into now were so surrounded and covered by vegetation that I couldn't easily get to them any more. Indeed, even the temple that looked to have still been looked after in the village now looked to have been abandoned like much of the rest of the place.

All of which left me wondering: has Sha Lo Tung been reclaimed by nature or is this a seasonal differentiation that I'm noticing? Alternatively put: does or will winter wither the overgrowth or is it the case that in a few more years, if not more months, there will be still less visible trace of it having been the case not so long ago that this was a part of Hong Kong where families actually used to have their homes?

So, was the tofu fa stall still there? I imagine when that disappears then Sha Lo Tung will be truly abandoned.

BTW, thanks for the tofu fa link! I enjoyed reading about all the regional variations.

I guess time will tell and a third visit will be needed to help determine if it is reclamation or seasonal differentiation.

It apparently is -- and something else for you to chew on: it wasn't there when I visited in May 2009!

And you're welcome re the tofu fa link: Re variations of tofu fa -- have you eaten the tofu fa with fruits in Hong Kong? :b

Maybe some time next year then... ;b

Were there any people around....other than you and your friend?

If you enlarge the first photo, you'll see two (other) people in it. Those were the only people we saw in the area -- and just two of a total number of three others we saw all hike!

Re ghosts: have to confess that the village was on the eerie side but, truly, the ants were our main worry -- though my friend also was antsy (pun intended) because of a couple of a dogs we saw (minus their owner). :S

YTSL, I've never tried tofu fa with fruit. Any recommendation for the best place to get it in HK?

The only ways I've had tofu fa is plain (but sweetened) and with ginger syrup. The variety I'm really eager to taste now is the Sichuan version -- with chili oil, soy sauce, pepper, scallions, and nuts!

its nice to revisit old places we've been.

i guess you don't have your PH yet. anyway, have a lovely weekend.

My all time favorite place for tofu fa with fruits is Sweet Dynasty (on Canton Road, close to opposite the Golden Gateway multiplex). For a budget option, try the dessert place on Temple Street near the Mido Cafe section of the night market. :)

And re the Sichuan tofu fa: sounds like it could be a vegetarian version of ma po tofu, don't you think?

Looks like you visited when I was at work on this week's Photo Hunt entry (which is up now)! :)

Thanks for the recommendations, YTSL! I'll check them out on my next visit to the Big Lychee.

And right you are about Sichuan tofu fa. I guess I've already had it, although not without the pork. ;)

You're welcome re the recommendation. And make sure to have the tofu fa with just sweet syrup or solid sprinkles while in Hong Kong too! :)

are you sure it's only open on weekdays? I was there on a Sunday and it was open (I opted for the strange brown sprinkles).

Aaaargh! Am not sure what possessed me to write weekdays since I meant to write weekENDS! (Duly amended in the text) :S

it must be all that bug spray you're inhaling :-)

By the way - were the ants you saw large brown ones? I have seen a large amount of these ones about lately. They're weaver ants and they can be pretty nasty. They don't poison you (like fireants do) but once they get onto you they just keep biting and biting.

Hahaha at your bug spray suggestion! Re the ants: they were indeed on the large side though I thought they were black rather than dark brown. Still, definitely will keep your weave ant info in mind and try to steer clear of them!

I know this post hasn't moved for awhile. Anyway, I recently went to Sha Lo Tung with my mum where she grew up and it was a joy to see her so happy. It was a very nostalgic trip as she had not been back for almost 20years!

When we arrived at the village, it was if my mum had come home however is was a little saddening that her house had collapsed leaving only the entrance wall intact. She did however bump into a few of her friends whom she had not seen for over 30years, what were the chances of that happening???!!

After the long conservation it was time to go, although nature is gradually taking back the land the village had left me with a everlasting impression. Sha Lo Tung may disappear over time but the memories will remain with me forever.

Thanks for sharing re your visit to Sha Lo Tung with your mom. Are her friends among the people who operate the food and drnks stall that is open on weekends there?

BTW, my most recent post on Sha Lo Tung can be found here:-
http://webs-of-significance.blogspot.hk/2014/07/from-hok-tau-up-cloudy-hill-and-then.html