A beautiful view of clear water, sand and more
from Stanley Main Beach 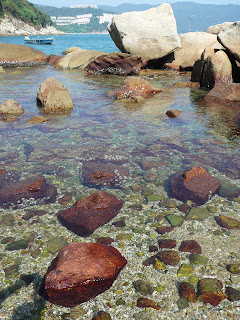 Another pleasing view of similarly clear water from
nearby (but far pebblier) Hairpin Beach
In what can seem like a different lifetime, I lived in Zanzibar, the storied part of the United Republic of Tanzania that once was the capital of Oman. Among the things I loved about the place was how beautifully blue the waters of the surrounding Indian Ocean was -- and I would happily spend hours gazing out at it (and the eye-catching dhows that sailed about the sea).

One day, while I was in the middle of doing just that, a Zanzibari friend interrupted my reverie to enquire why I was so enthralled by the ocean views from his homeland; and this especially since he knew that I also hailed from an island -- albeit one located on a different continent from his. "What's so special about the views from Zanzibar?", he wanted to know. "How blue and clear the ocean is", was my answer. "Aren't the waters surrounding your homeland the same way?", he enquired. "Not at all", I scoffed. "Why was this so?", a puzzled he wanted to know. "Because it (the Strait of Malacca) is one of the busiest shipping lanes in the world -- and its waters thus pretty polluted", I told him.

My answer caused my friend to think a while and then tell me something that made me feel so very sad as well as gave me great pause: "I'd happily have the waters off Zanzibar be polluted if it meant that Zanzibar could have the kind of economic development and success that Malaysia has". (To put things in context, the year that I lived in Zanzibar, Tanzania was ranked as the second poorest country in the world.)

Some fifteen years after that conversation which I still vividly remember, I was strolling about on a couple of beaches of the Big Lychee and found myself marveling at how clear the waters off shore were. For how is it that despite Hong Kong being a major international port, its surrounding waters can be so very clear and apparently cleaner than one might imagine?

To be sure, there are days after rains when the seas and rivers can contain far more rubbish than one would like to see. But I actually think that Hong Kong's Environmental Protection Department deserves some credit for cleaning up the territory's waters (even while it often seems to be the case that they could and should do more about the air quality of Asia's World City).

In any case, it does seem that Hong Kong really manages to have this cake and eat it: that is, have a healthy economy but also a physical environment that can be very pleasing to the eye (and help make for some great days at the beach)! :)

I like how when one clicks on the second photo the parts of the rocks that aren't underwater add a 3D dimension to your photo.

Yeah, I love that 3-D quality about the second one too.

And that person in the boat is so perfectly placed that if I didn't know you are reluctant to photograph people I would suspect that you paid him/her to go out and embellish your composition. ;p

Definitely an interesting perspective on progress. HK has done a great job keeping the waters clean especially since it is such a large significant port. I applaud it.

The western part of HK is still fairly polluted. Eastern waters have always been much cleaner.

I would expect to see water clarity improve even further once (if) Donald's trawler ban gets implemented, as promised in the last policy address.

I scuba dive in HK so it's great when you get a day with nice clear water.

I hadn't realized how that would look but now you've pointed it out, I see it too! :)

Re the person on the boat: He was far away enough that I had no qualms taking a photo of him -- but no, definitely didn't go so far as to get him to pose for me. :D

Like Phil (aka orientalsweetlips) wrote in this comments thread, it's not all perfect in Hong Kong. And yet I really do think the water situation is a lot better than one might think. :)

I think you're particularly thinking of the western New Territories but the outer island beaches -- i.e., those I've been to on Lantau, Cheung Chau and Lamma -- and waters off them are actually pretty good. And particularly in comparison to Macau's Hac Sa -- urgh at the memory of the waters off that beach. :S

YTSL - yes you're right about Macau. In fact you can see the water change colour right in front of your eyes on the ferry from HK. You know you are getting near to Macau when it turns a really mucky brown.

In HK, Tsuen Wan is probably one of the worst. Most of the gazetted beaches up there have been closed indefinitely.

Hi again Phil (aka orientalsweetlips ;b) --

I know about the reputation of the beaches at Tsuen Wan but have you seen the following news bulletin about how "Seven closed beaches in Tsuen Wan, namely Anglers’, Approach, Casam, Gemini, Hoi Mei Wan, Lido and Ting Kau Beaches, have shown marked improvement in water quality and met the standard for bathing, according to the water quality monitoring tests carried out during the bathing season (March to October) in 2010"?

And have to say that from the photos, they actually look quite nice. So might put them on my list of beaches to check out next year...

no, I had no idea. That is good news because the beaches themselves look really nice and clean.

And don't forget the Swimming Assoc is also trying to get the cross-harbour swim reintroduced next year. Albeit at another (cleaner) part of the harbour. But still, good news for everyone.

Good news -- and more hopefully cool places to visit in Hong Kong for us and others! :)

speak of the devil:

So... planning to check out at least one of the beaches (if not its waters) some time next year? ;b