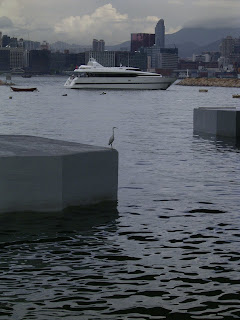 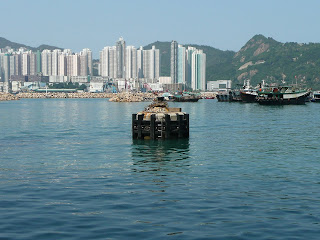 Typhoons are strong hurricane-strength tropical cyclones that occur in the northwestern Pacific Ocean that surrounds much of East Asia and nearby/associated bodies of water such as the South China Sea. Taking their name from the Cantonese tai fong (trans., big wind), they regularly occur and pay visits during the summer to the part of the world in which Hong Kong is situated.

In view of factors such as much of Hong Kong bordering or being surrounded by lots of water and a significal percentage of its population historically being boat-dwellers as well as seafarers, the territory has an elaborate system for dealing with typhoons that includes the construction and continued existence of official typhoon shelters. Shelters against rough seas, they are where -- and yes, we're finally getting there! ;) -- small waves and ripples are the rule rather than exception.

More specifically, this week's Photo Hunt's are of the typhoon shelters at Causeway Bay (upper photo) and Shau Kei Wan (lower photo). As befits it being in the vicinity of the very private Royal Hong Kong Yacht, Causeway Bay Typhoon Shelter is home to luxury boats along with more modest craft (and -- it seems from my photo -- wild birds!). In contrast, Shau Kei Wan's Typhoon Shelter is home to traditional Chinese fishing boats -- which themselves pose quite a visual contrast to the many high rise apartment buildings to be found on the Hong Kong Island as well as Kowloon side of Victoria Harbour!

These are both beautiful shots and a very interesting post. I'd never heard of typoon shelters before.

Very interesting post and I love the photos. I'd never heard of those shelters either. It's hurricane season here on the East Coast USA and I've had enough experience with them that I don't take them lightly - I'm sure it's the same in Hong Kong.

great post YTSL. i dont know what happened but since Benghui got sick I sort of have a writer's block... just cant find the words to write any more :) Hope i snap out of it soon.

hello! thanks for the comment. mine's nothing compared to yours however! i love your photos i've seen around the blog.

and i never knew about typhoon shelters! and that they looked like that. so that was interesting to see. :D

have a fab weekend!

i love your interpretion for the theme, very informative. love the shots as well. happy weekend!

Typhoon shelters are new to me...but I live inland in the middle of Canada. Interesting post!

Being from practically the same side of the globe, I know exactly what you mean about those mean typhoons.

A very interesting post! I must add my name to the list of those who have never heard of these typhoon shelters! But for now, the waters look so serene!

Thanks once again for reading as well as looking! :)

Summer seems to be when these tropical cyclones get active -- as it's typhoon season here too. Touch wood but there hasn't been a typhoon in a couple of weeks... but at the beginning of the month, there was one that was pretty scary.

Thanks! As for your writer's block: well, that's when photos can come into the picture... ;b

You think only one of my shots is beautiful? ;(

Aw, thanks but seriously, liked what I saw on your blog too! :)

Thanks for reading all the way through as well as appreciating my photos. :)

Hope your country/city hasn't had to suffer too much from typhoons this season.

I hope the waters in the typhoon shelter aren't too rough even during major storms. But yes, they do seem especially serene on fine days. :)

Very informative post (never heard of those shelters before) and great shots for the theme. Love the first one with the posing bird!!
Happy PH! and thanks for your kind words.

This post was most educational!!! And your photos are perfect.

I tried to think of something that was 'different' other than water...

So, HERE is mine The Ripple Effect.

I wish we have more typhoon shelters here [in the Philippines] as these islands are typhoons' favorite hangout.:P

I remember coming into Hong Kong after a typhoon many years ago and seeing an oil tanker thrown up on shore. It left an impression.

Once again, I learned something new here! I love telling my kids about the places I "visit." Thanks!

Mine is up! I hope you have a chance to visit.
New York Traveler.net

Have a great weekend!
Mrs. Mecomber

the top photo is so very dramatic! I love the bird, as elegant as the yacht.

Interesting post. I liked my trips on the water in Hong Kong. Our company had a boat and captain. His name was A Hoy.

Haven't gotten to Hong Kong yet, but it is on the list. I like the combination of ripples and information i got here. http://healingmagichands.wordpress.com/2009/08/22/photohunter-ripples/

Nice that people appreciate my sharing! :b

Am glad visitors are getting something educational out of visits to my blog -- and apparently enjoying being educated too! :)

Oh dear re the typhoons "favouring" the Philippines for visits. Hope there won't be too many more visits this typhoon season.

Wow, such a sight definitely would leave an impression. Fortunately, I've yet to experience typhoons of such strength (even while already having been here for two -- or is it three? Weird but true: I slept through the most recent one! -- typhoon 9s now)!

Thanks for telling your kids about blogs like mine. :)

Am glad you like the first photo. I worried that it was on the dark side. (My (old) camera trying to compensate for the bright glare that day!)

Re the bird: I think it's called a sandpiper?

A Hoy? Must have been a joke - or nickname for people to easily remember him! Or maybe he was called Ah Hoy - with Ah being like the "y" English-speakers like to attach to certain names, e.g., Johnny, Jimmy and Jenny.

Hope that when you visit Hong Kong, you'll venture beyond the usual tourist paths -- sometimes using my blog as a guide to what else is out there... :)

Your posts are always so interesting.

Thanks for the complimentary comments. Really appreciate them. :)