The Peak down to Pok Fu Lam (Photo-essay)

Earlier this year (in March, to be more precise), I went on a hike that almost feels like it took place in another life time. For one thing, my companion on that admittedly easy downhill hike that day was my pre-operation mom. For another, it was a spring day that was as cold as it was foggy -- and today is super hot. (For the record, today's high temperature actually was 34.6 degrees Celsius!!)
So foggy was it, in fact, that I actually wondered whether we should go ahead with our planned walk down from The Peak -- especially since the fog was so thick in parts on the way up that, from the top of our bus, we frequently couldn't even see two vehicles ahead! But proceed we did and proceeded to have a rather pleasant hike; one that, even if too easy and short for my liking, still yielded some, to my mind, interesting sights and shots... 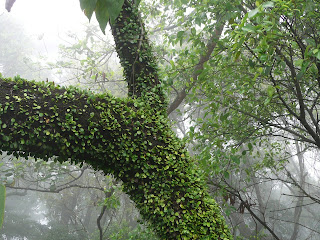 I honestly have never seen a tree trunk
so covered by little (parasitic?) leaves before... 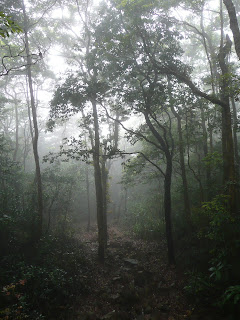 Like a still shot of a horror movie scene? 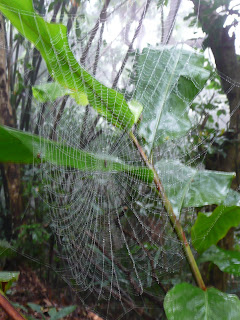 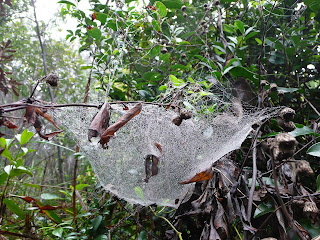 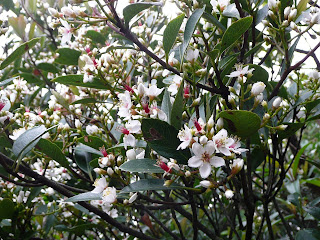 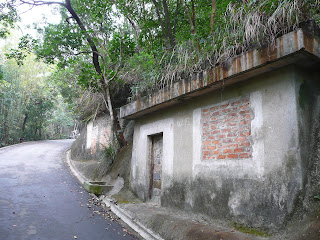 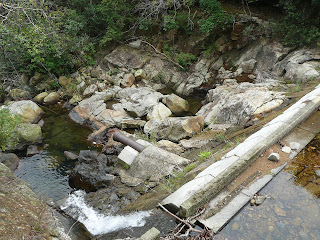 Waterway -- complete with pipe (not cannon!) --
leading down to Pok Fu Lam Reservoir 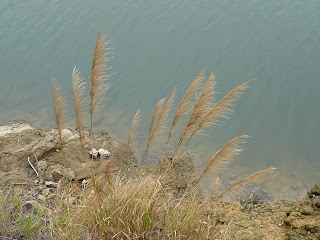 The waters of Hong Kong's oldest reservoir
were so calm I almost used this photo in
this past week's "rippled"-themed Photo Hunt entry
(but then decided to save it for this entry instead)! ;)

Awesome shots! I plan to make a trip to HK later this year, and will, hmm.. try this route too ;)

Those parasites on the trees are called money parasites. In Malaysia you have a lot of these. That day when I went Penang was the 1st day of muslim fasting. No laksa. Aaargh!

It's an easy enough route. Combine with a circuit around The Peak and it should yield interesting photographs galore for you! :)

Thanks for the ID and have to say, I've seen such in Penang but with bigger leaves. And yeah, my mom told me about your visit. (Thanks again for visiting her, more than BTW.) No laksa as well as no me -- bad timing! ;(

Your foggy photos are wonderful and I like that it's an easy hike too. Is this a hike that one can do by oneself?

For sure! And for the record: Friday's South China Morning Post's front page had it that this August already is the hottest in decades! :S

Glad you like the foggy photos. Re the hike: Before I moved to Hong Kong, I actually did this hike on my own on a summer day. I guess it's safe enough bar that there are people who like to unleash their dogs about. In general though, would really suggest that one never hikes alone in Hong Kong.

This is a fantastic photo essay. Wonderful shots.

Thanks for checking out and appreciating more than just my Photo Hunt entries! :)

Cold and foggy... that sounds perfect for a hike in Hong Kong!

Cold is good but I prefer clear to foggy -- that way I get to see the often beautiful views to be had when out hiking in Hong Kong. :)