My mother's favorite Penang dessert (and mine too!) 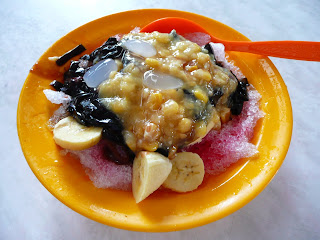 The famous Swatow Lane ais kacang
that's got far more than just
ais (ice) and kacang (bean(s)) in it!
Greetings again. I'm actually now back in Hong Kong and *sob* in just a little more than 12 hours, I have to get back to work once more. But knowing that some people are eagerly awaiting photos of Penang food... well, I know there's just one photo in this entry but hope that it -- and this blog post as a whole -- satisfies for a time at least!

When my mother was a schoolgirl, she took to patronizing a particular hawker's stall whose offerings included quintessential Malaysian treats known as ais kacang (in Malay) or ang tau s'ng (in Hokkien) -- either way, it literally translates = "ice bean(s)! -- in Penang (but air batu campur (ABC for short; literally translated = "ice mix") in such as Kuala Lumpur) and ice ball(s) over in Swatow Lane.

She continued to go there to get icy treats during her working days and over the years, introduced her husband, children and many friends to the delights of eating at that particular stall whose offerings are particularly appreciated on hot, thirst-inducing days.

Even in the time that I've known it, the stall has undergone quite a few changes. For one thing, the two uncles who I first encountered manning the stall have passed away as well as passed on their culinary talents to a new generation of that family whose expertise has actually seen them representing Penang at food fairs in Singapore, Adelaide (the twin city of George Town, Penang's capital) and elsewhere. For another, its location has moved from one side of Swatow Lane to another and most recently into the New World Park Hawker's Centre (located on the site of a former amusement park whose attractions included striptease queen Rose Chan).

Fortunately, amidst all these changes, I haven't detected any significant decrease in the quality of its colorful specialty dish... whose integral ingredients are a small mountain of shaved ice (that melts really quickly) coated with syrup (rose is the norm but the Swatow Lane stall also has a sarsi (aka sasparilla) option), underneath which lies some kidney-type red beans mixed with sweetened sweet corn and cincau (black grass jelly).

Many people like a further topping of sweet condensed milk on the shaved ice but my mother and I are not fans of that. At the same time, I'm about the only person I know who likes an extra topping of bananas in the mix. Furthermore, I looove that the Swatow Lane ais kacang also counts atap chee (palm fruit seeds) among its ingredients -- and reckon that when taken as a whole, you've got a pretty cool (in more ways than one) culinary combination that I like best during the part of the day that the British and Anglophiles like to reserve for afternoon tea! ;b

I've had ais kacang before, but this one looks especially delicious.

I take it you had some with your mom before leaving Penang. It's nice to have a special food with such a long history of fond memories.

Thank goodness one can't gain weight from reading about and looking at pictures of yummy snacks!

The uncles who ran the food stall initially clearly had a winner and it is nice that stall and the expertise stayed in the family.

Glad you had a safe trip back to HK.

ohhh, ice-kacang, i haven't had it in years...in fact now you say it, i crave it..hahaha..not that i was a big fan even during my yrs growing up in Penang, in fact i hardly ate ice-kacang in the past decade...but now u describe, suddenly what you can't have, immediately becomes more palatable..mmm..have to go try out the malaysian restaurants in sydney for their ice kacang now..haha..

I'd very happily swap that for my afternoon tea, any time! Not that the summer has really been conducive to wanting cold desserts at all.

I'm happy to hear your mother is improving.

Wow, that looks so yummy. I've had beans in a bean sauce over shaved ice in Japan which I thought very tasty. However your Penang dessert looks much tastier. How many did you manage to eat while at home?

You left me feeling really guilty -- believe it or not, I didn't go to the ais kacang place with my mom but, instead, somebody else. *And* didn't think to get some to take home for her -- figuring that she can have it pretty much whenever she wants on account of her living in Penang... ;(

Teehee re your first comment! And yes, I think the uncles knew they had a winner -- and am glad that their descendants appear to realize that too. :)

Here's the thing: ais kacang connoiseur that I am, I won't have ais kacang from just any place. Not even other stalls, like the one in Lorong Selamat, over in Penang!!! But if you do go have it in a Malaysian restaurant in Sydney, do come back and let me know how it was, okay? :b

Sounds like you should plan a visit to Penang (as well as) Hong Kong then... ;b

It IS yummy! But I restricted myself to just one as there really is so much to eat in Penang. Heck, this time around, I didn't have rojak or Penang chee cheong fan even once! ;S