A picture, as the proverbial "they" assert, says a thousand words. Even if this isn't the case, I figured that it doesn't hurt to vary things a little. After all, as the proverbial "they" also have been known to state: variety is the spice of life. So in today's entry, here's going ahead and letting a few pictures -- specifically, a septet of photographs which I took on a trip to Japan earlier this year -- do much of the talking:- 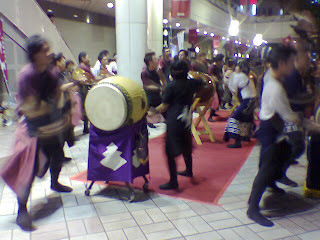 Should there be people out there who think that the Japanese don't know how to party(!): Celebrations carry on into the night in Kokura, northern Kyushu, during a spirited taiko drumming matsuri (festival). 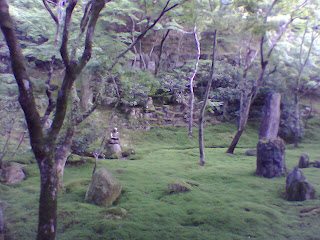 Alternatively, if peace, quiet and Zen serenity be what you seek, go ahead and make your way to the ancient temple town of Dazaifu's Komyozen-ji Temple to silently take in its seriously aesthetically pleasing contemplative garden. 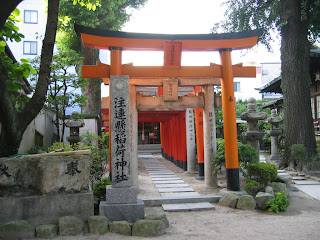 Multiple torii (gates or gateways to Shinto shrines) at the Kushida-jinja, the Hakata area of Fukuoka's principal Shinto shrine. 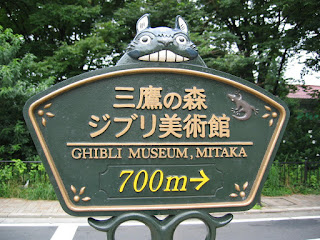 One of many signposts that point visitors towards a more contemporary shrine, the wondrous Ghibli Museum in the leafy Tokyo suburb of Mitaka -- and who's that grinning chappie at the top of it, I wonder? :b 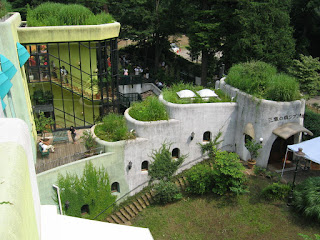 A view of other portions of the innovatively designed Ghibli Museum from its rooftop area/garden... 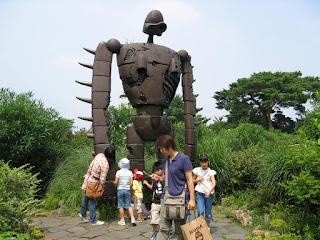 ...where this tall figure stands guard! (For those unfamiliar with it, do go ahead and treat yourself to a viewing of Hayao Miyazaki's Laputa: Castle in the Sky some time). 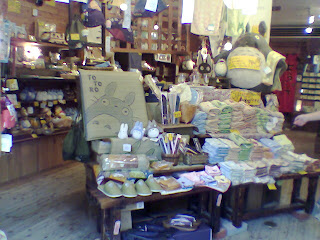 Some inkling of how much My Neighbor Totoro and its titular character is adored by the Japanese can be seen by this Totoro (item)-laden store being located along the main thoroughfare leading to Dazaifu's main Tenman-gu shrine (that's dedicated to Tenjin, the guardian deity of scholars)! :)

I love these pictures, especially the totoro shop!

Glad you loved the pictures. And re that totoro shop: The scary thing is that it's one of the smaller and less well-stocked of those that I saw -- and yes, went into plus patronized! -- in Japan!!! ;D

Wonderful pics, YTSL, but what am I to make of the absence of Hello Kitty shots? Have you thrown over the mouthless feline for the cuddly comforts of Miyazaki's critters?

Read an earlier blog entry ("Ten Things That Make Me Happy") and you'll see that I still hold Hello Kitty -- *and*, for that matter, Winki Pinki -- pretty dear! However, must admit that I do associate Japan more with Totoro, if only because Hello Kitty also is mucho popular in other places (e.g., Hong Kong). :)

Apropos of nothing (save for the fact that "Japan" appears in the subject heading), I am very pleased to learn (via a bit of MHVF lurky-looing) that you finally had the chance to watch several Mizoguchi masterworks. I take it you found SANSHO an emotionally devastating experience (as I always suspected you would). And UGETSU, I imagine, gave your tear ducts a work-out; that climactic three-hundred-and-sixty degree homecoming shot never fails to break my heart.

Re the MHVF thread: I was more than a little put-off by the know-it-all poster who snootily proclaimed Naruse's work superior to that of Mizoguchi. Trying to decide which master filmmaker is more masterful... I mean, talk about trivial pursuits!

Hey, I also admire WHEN A WOMAN ASCENDS THE STAIRS (as you probably recall), but please don't let that guy's windy opinions steer you away from STREET OF SHAME, which is right up there with QUEEN OF TEMPLE STREET, THE SEA IS WATCHING and NIGHTS OF CABIRIRA in the pantheon of prostitute dramas. "Coarse", my big toe.

Here's hoping you one day get to see Mizoguchi's great LIFE OF OHARU, starring Kinyuo Tanaka,
who played the ill-fated mom in SANSHO as well as the eponymous character in Naruse's
transcendent MOTHER.

Glad to know that you're still doing a bit of MVHF lurking and "apropos of nothing"-ing! ;)

And don't you worry: I'm not at all steered away from wanting to check out Mizoguchi's STREET OF SHAME and other films. At the same time, I do rue that we're no longer able to loan each other videos (as a result, among other things, from the Malaysian customs being sure to delay packages and maybe even confiscate them).