Inspirational words to try to live by 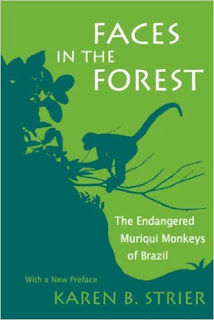 As mentioned in a previous blog entry, I was an undergraduate student at Beloit College. While at that small liberal arts college in Wisconsin, U.S.A., I double majored in anthropology and art history (and minored in museum studies).

Although I very much enjoyed my art history classes, particular those which were taught by the utterly charismatic Prof. Debra Mancoff who actually bestowed upon me the honor of an acknowledgement in her The Arthurian Revival in Victorian Art, even Debra knew and accepted that anthropology really was my primary love.

During two out of the four years that I was at Beloit, the then five person department was very fortunate to have as its physical/biological anthropology representative a professor by the name of Karen Strier. Karen arrived at Beloit from Harvard University where she had been a lecturer and also received her Ph.D. The Harvard mystique aside, she -- whose research focus was/is the Muriqui monkeys of Brazil -- also had a glamorous aura around her due to her having been featured in an issue of National Geographic Magazine.

At the same time though, those of us who had the privilege of being Karen's students can attest to her possessing a lot of substance as well as style. Two other things that made many, if not all, of us warm to her as an instructor and person were that: a) she was adapt at weaving life lessons into the physical/biological anthropology ones; and b) she had a sense of humor -- that she often would turn on herself -- which showed even when she was going about imparting knowledge and wisdom.

Thus it was "so Karen" to tell the following inspirational but also funny story -- one that I've made a point to in turn relate to my students, and many others, whenever the opportunity arises -- during the last lecture of the The Human Animal ( i.e., Beloit's more interesting(!) name for the Introduction to Physical/Biological Anthropology) course that she taught in the Fall 1987 semester:-

(N.B. I'm going to write it as though she's telling the story. Obviously, I can't vouch for the accuracy of every single word. But, believe me when I tell you that, close to nineteen years on, I still definitely remember many of the details as well as overall message.)

I had been running around all day in the (Brazilian) jungle, fruitlessly chasing after the Muriqui. I was exhausted and feeling frustrated because I hadn't managed to do much productive research. Hell, I hadn't even gotten any clear views of the monkeys. So I stopped and asked myself: "Karen, why are you doing what you're doing?"

Looking back, I know I've not always adhered to the advice that Karen imparted to me and the rest of her students that day. However, I remember it and do try to live by it more often than not. So, even though I doubt that she'll be reading this blog anytime soon, I would like to be on the record somewhere as saying (or writing): Thank you, Karen, for those inspirational words, your anthropology and life lessons, the memories, and so much more besides... :)
Posted by YTSL at 10:19 PM