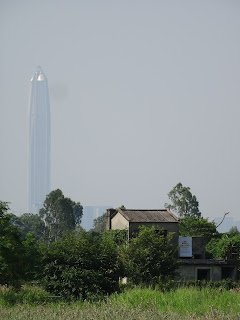 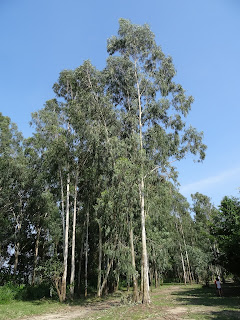 In contrast, trees are the tallest sights
to be found at Nam Sang Wai itself 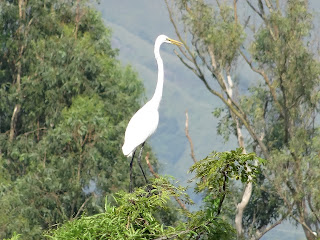 This egret seemed intent on making itself appear taller
both by stretching its neck up and perching atop a tree ;b


Years before I set foot in Nam Sang Wai (and onto its river sampan), I was treated to images of this photogenic locale by local filmmakers such as Johnnie To and Wilson Yip.  And on the two previous occasions that I visited this part of the Big Lychee that lies close to the Hong Kong-Mainland Chinese border, I was much taken by its river red gum trees as well as the variety of critters (including a mongoose that darted too quickly across the path for me to snap a shot of) I caught sight of there.


Consequently, I was pretty horrified to read a news report a few months back about massive tree cutting having taken place in that wetland area.  And for some time, I didn't want to return to Nam Sang Wai for fear of seeing terrible devastation in yet another part of Hong Kong which has been reclaimed by nature, only to be latterly threatened by "development".  But after curiosity finally got the better of me, I went with a friend to check things out this afternoon.


On the walk from Yuen Long MTR station to the section of the nearby river traversed by a sampan, I noticed that more buildings -- mainly residences but also one housing a new restaurant -- had come into being than the last time I visited, just a couple of years ago.  But after we got off the sampan on the other side of the river, things actually looked pretty much like I remembered -- with just one pretty basic eatery (serving such as tofu pudding and bottled drinks) in the area, and many trees still about the place.


Despite the temperature being in the hot 30s (degrees Celsius, not Fahrenheit!) out there this afternoon, there still were quite a few people out and about at Nam Sang Wai.  Not only were there leisure walkers and bicyclists around but also -- like was the case during previous visits -- wedding photographers and their clients, and also those who still prefer to fly model aircraft rather than the drones that a number of people now own and operate.


In contrast, there seemed to not as many signs of non-human life at Nam Sang Wai today than when I previously had been there.  Yes, there were a few butterflies, bees and birds about.  But, if truth be told, I got to wondering and worrying whether the area's become more ecologically "dead" than would be ideal.  And while it doesn't help that many of the people out there today seemed to be on the noisy side while out enjoying themselves in the area, even more disturbing was the amount of trash (including plastic bottles and bits of styrofoam) I saw scattered about the place, and particularly close to and among the weeds at the edge of the often rather ugly -- and actually quite smelly -- brown water.

This time last month, Hong Kong was hit by a veritable "garbage tsunami" which largely originated from Mainland China.  And last Saturday, after spending time doing beach clean-up at Lantau's Chi Ma Wan peninsula, the crew I was with walked over to Pui O and were shocked to see that the normally clean -- and popular -- beach there had even more rubbish strewn on it than the isolated beach at Chi Ma Wan where we have focused our clean-up efforts in recent months.


As another news report today showed, Hong Kong's beaches still have a major garbage problem.  And I think what I saw at Nam Sang Wai confirmed that some locals -- not just people on the other side of the Hong Kong-Mainland Chinese border -- need to do better when it comes to better taking care of the environment in general and disposing of their rubbish in particular.

Alternatively put: while it's fine and well that there looks to have been a growth in the appreciation of nature, particularly the great outdoors, in Hong Kong in recent years, it seems that there is not yet a strong enough realization and understanding of how much human actions can (negatively) impact the natural environment.  For if that were so, surely Hong Kong wouldn't generate so much waste as well as have so much of it ending up polluting our land, waters and air?!
Posted by YTSL at 11:37 PM