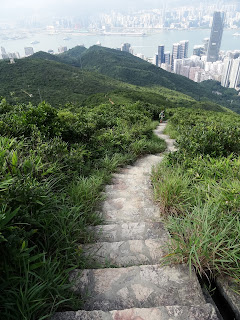 It takes many steps to get this far above the city! 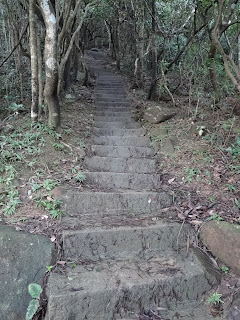 
Although today (with maximum temperatures of "only" around 33 degrees Celsius (~91.4 degrees Fahrenheit) was not the hottest day that I've been out hiking, it may well be among the most humid.  The air felt thick and muggy this afternoon, and it was so very easy to get drenched with sweat.  More than incidentally, I'm one of those people who sweats so much that I'd be a great test subject for sunscreen that doesn't get washed off easily by one's own perspiration.  So on days like this, I end up feeling like it's no use putting any of that stuff on me!

Some 30 minutes into today's hike, my palms were wet with sweat as well as my limbs and other parts of me that normally get covered with perspiration whenever I'm having a good exercise.  And about two thirds into this afternoon's outing, large swathes of my olive green-colored shorts had the kind of stains that got me worried that people might think that I had the kind of "accident" that comes from not having been able to make it to a toilet in time!


By the time I got home some four hours later, I felt really drained of energy.  And my pedometer registering 18,365 steps only told part of the story since the great bulk of the steps I took today were on stairs leading uphill -- first to 424-meter-high Siu Ma Shan and then 435-meter-high Mount Butler.  Also, after getting to the top of Mount Butler, there came a nervy descent down the Jacob's Ladder on Hong Kong Island that I think is quite a bit steeper than the section of trail bearing the same name over on the Sai Kung Peninsula -- and potentially more slippery than usual this afternoon because its steps were on the wet side and covered with lots of fallen leaves.

But even though today's excursion was on the exhausting side, it actually was pretty fun to be outdoors this afternoon with a couple of hiking buddies and on a trail which offered up a number of interesting sights and view bonanzas.  So I'd definitely much rather be out there than, say, getting a similar exercise on a Stairmaster in a gym!

And while it's true enough that this particular hiking trail (which began and ended pretty much at sea level but saw us scaling a couple of hills in between) would be significantly easier to go along in cooler and drier conditions, the chances also are high that the visibility just wouldn't be as good as it is on a summer day like today.  Also, masochist that I am, I figure that I should reserve cooler days for even more challenging hikes than this one! ;b
Posted by YTSL at 10:51 PM