A passion for Cantonese opera 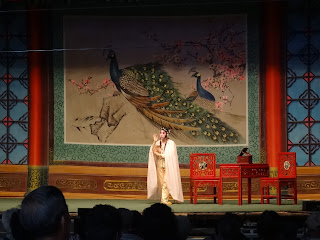 Cantonese opera in a bamboo theater in Cheung Chau 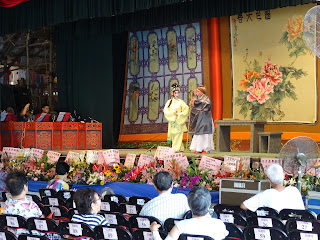 Cantonese opera being performed in a similar
bamboo theater -- this time over on Lamma island
Have you heard about the Finnish woman who lives in England who is so much of a Cantonese opera fan that she regularly comes over to Hong Kong to attend Cantonese opera performances?  It may sound like a joke but such a person really exists, and I count her as one of my friends.
At lunch earlier this week, I asked her if she knew of other Cantonese opera fans living in London.  She shook her head and said no -- and then added that, actually, she didn't have any friends living in Hong Kong who were genuinely fans of Cantonese opera either!

Hearing this friend from far away wax lyrical and enthusiastically about her particular passion, I felt somewhat guilty for not being able to appreciate this local performing art more, and for attending just a handful of Chinese opera shows in the time that I've been in Hong Kong.  At the same time, I actually think that I probably have attended quite a few more than most other residents of the Big Lychee -- local or foreign alike.
Also, while I have to admit to not being all that appreciative of Cantonese opera singing, I must say that I do get very impressed by the accompanying instrumental music, the performers' costumes, and the handpainted backdrops that often remain in use to this day, both at the Sunbeam Theatre in North Point and also the temporary bamboo theaters that spring up in various locales during the festive season.  In addition, although I've not tended to go out of my way to attend a Cantonese opera performance, I usually am unable to resist checking out what's taking place inside a bamboo theater whenever I come across one -- which, more often than not, seems to be when I'm out hiking or am otherwise out of the city for the day.
Then there are the Hong Kong movies I've happily viewed over the years in which Cantonese opera performers prominently figure.  Among the most memorable for me have been Ann Hui's The Spooky Bunch and Shu Kei's Hu-Du-Men.  More than incidentally, I like how my real life sometimes has crossed paths with reel life in that I've actually come across a Cantonese opera troupe performing in a bamboo theater on Cheung Chau (like was the case with the Cantonese opera troupe featured in The Spooky Bunch) and watched Cantonese opera being performed at the Sunbeam Theatre (on whose stage Josephine Siao Fong Fong and co were seen performing in Hu-Du-Men)! ;b
Posted by YTSL at 11:53 PM

Nice article. As a reward, there will be a ticket with your name on it to see a Cantonese opera next time I'm in town ;o)

(Or is this pushing it too far and threatening my place on your list of friends?)

Ooo, you're reading my blog! And your offer sounds more treat than threat -- though when you pick a Cantonese opera for us to go to, please let it be one with English surtitles for the dialogue as well as song lyrics! ;b

But I will pick something with my favourite performers and avoid anything with a complicated historical plot (I can't even follow that kind of stories in the cinema with complete subtitles :o/ )

Eek re the surtitles -- don't they mention it in advance in the advertising for the shows?! :O

BTW, I've seen live Chinese operas with the same plots as those for movies such as "Miss Du Shi Niang" (starring Michelle Reis) and "The Grand Substitution" (a Shaw Brothers production starring Ivy Ling Po). And I guess I'd be able to understand things just fine if I were to do the same again minus any English surtitles!

All I'm saying is that the odds of finding an opera with English surtitles are negligible. If you look at Urbtix English language pages you'll find that most of the operas don't even have their names translated.

You usually only get English surtitles during Chinese Opera Festival where the budget is large and performances are at venues like the Cultural Centre. The only regular opera venue that is equipped to do surtitles is the Ko Shan Theatre New Wing and even there it's rare (I'd never seen them before this summer). Your average opera troupe is not going to have the resources to do English surtitles on the off-chance that there might be one or two people in the audience who might want them.

I don't particularly like surtitles because they distract from what is happening on the stage. I prefer sitting at the front where I can see the actors rather than at the back so that I can read surtitles. A written synopsis of each act is usually sufficient (they do this quite well at the Yau Ma Tei Theatre).

And for my part: I've been known to be willing to watch some (rare) Hong Kong films without any English subtitles -- and do watch tons of (ahem...) Funassyi video clips on Youtube that don't have English subtitles. But whole Cantonese opera shows without English surtitles... yikes! ;S