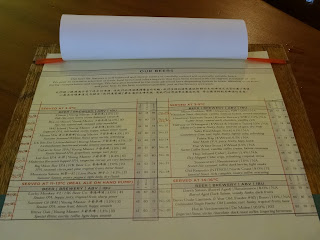 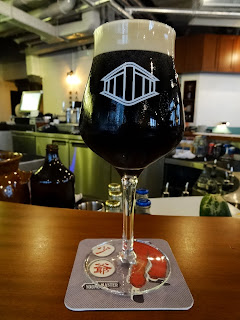 My first ever glass of the draft version of the
North Coast Brewing Company's Old Rasputin Imperial Stout!


Some two decades ago now, I went on a leisurely road trip with a friend from Philadelphia, Pennsylvania -- where I then lived and worked -- down to Beaufort, South Carolina, before returning to the City of Brother Love via a more direct and faster route.  Early on during one of those parts of my life that I'll remember -- and treasure -- forever, I found myself sitting alongside my friend on a quiet beach one evening, enjoying the sound of waves, the fresh breeze and a couple of bottles of really good beer.


Earlier in the day, my friend and I had found a place with a nice craft beer selection -- and I had opted to buy a four pack of the North Coast Brewing Company's Old Rasputin Imperial Stout because I had been a fan of that strong, dark beer style ever since I was introduced to Samual Smith's Imperial Stout on tap in a London pub by an old English boarding school friend who hailed from the north of England.  And as I sipped my first ever bottle of that American microbrew, I got to thinking -- and feeling somewhat shocked when doing so -- that I had actually found an imperial stout which tasted better from a bottle than the draft version of what may well be my favorite English beer of all!


Although I did visit California a few times after I became familiar with the wonders of the Old Rasputin Imperial Stout, I never did spend time in a drinking establishment where that California beer was available on draft (or, for that matter, in bottles).  Also, back in those days, you'd never expect a microbrew from the West Coast to be on tap in a bar over on the East Coast as they tended to be very local products.


Almost needless to say then, I pretty much figured that I had kissed my dream of tasting the draft version of this wonderful American craft brew goodbye once I left the US and made my way back to Asia a decade or so later.  And this especially since in the first years that I was back in Asia, about the only stout I ever saw on offer was Ireland's famous, mass-produced -- but, to my mind, rather one-note -- Guinness.

But about three years ago, I saw an imperial stout from Norway's Nøgne Ø brewery on tap in a Hong Kong bar and realized that the times were a changin' -- in that the microbrew (or craft beer) revolution had finally reached the Big Lychee!  And in the spring of 2014, I finally came across the sight of bottles of Old Rasputin Imperial Stout on sale -- and proceeded to grab a few of them even while scarcely believing my eyes and luck!


As I came to find out though when trying to share my love of this beer (along with a few others) with friends, this rich and complex tasting brew is actually somewhat of an acquired taste.  And even though it's popular enough among beer geeks that North Coast now brews this super dark beer all year round rather than -- as was previously the case, and customarily for (imperial) stouts -- only in winter, it seemed that there would be little hope that bars in Hong Kong would be willing to offer it on draft here.

So imagine my excitement as well as ecstacy upon seeing Old Rasputin Imperial Stout offered on tap at Second Draft, a new bar-restaurant in Tai Hang which is currently in its soft opening stage but already attracting quite the buzz and crowds.  And yes, I can confirm that this California beer has travelled well and tastes great in draft form; so much so that I not only came away very happy after having two glasses of the 9% alcohol brew this evening but also am seriously contemplating becoming a pretty regular patron of this establishment -- which, if truth be told, would otherwise be too hipster and way popular for my liking... -- as long as they have this great beer available on tap! ;b

Update (on September 20th): I visited Second Draft again this past Sunday and found out that the Old Rasputin Imperial Stout is off the menu; and worse, they don't know when it will return to the menu.  I'm hoping that they'll bring it back this winter (a season for which imperial stouts are best suited).  Sadly though, the bar manager didn't sound too enthusiastic about doing so when I spoke to him; this despite it having been very popular when it was offered at Second Draft. :S
Posted by YTSL at 11:26 PM

Thanks for the tip. I have to try it. Let's hope it wouldn't run out soon.

You're welcome. I know you're a fellow fan of Old Rasputin, and think you'll enjoy it a lot in draft form. Hope there will be lots of other fans of this imperial stout and that the bar will find it worthwhile to have it (regularly) on tap! :)

It's not a bar-restaurant! It's a gastropub! Or is that too hipster for you?!

But it is hipster! Embrace it! hahahhaaha

Just recently I've had a few dark beers I actual like.
Coffee is on

Hmmm... now you've got me wondering whether, being the hipster place it is, Second Draft won't have a "happy hour" even after it officially opens. If so, that would... suck! ;(

Not all dark beers are created equal -- but the good ones can be very delicious indeed... and especially wonderful to drink when the weather turns cold! :)

Wow, you got there pretty quick! Maybe we'll meet there some time... ;b

You're not too old to start... and congrats re Joseph Schooling's Olympic win! It made even this person from the country to the north of Singapore happy and proud. ;)

The tap version seemed to taste not quite the same than the bottled version. I wonder if it has something to do with the Nitro treatment at Second Draft. I could not recall how taps there were Nitro Tap though.

I have to admit, it is expensive if compared to the bottled version. But I would still go there once in a while.

I'm okay with the Old Rasputin Imperial Stout's Nitro treatment. Have to admit to being rather surprised by its low serving temperature though. It's probably that way because of the hot weather. Put another way: I'm trusting that it'll be served closer to room temperature when the temperature outside drops some!

And yes, it is more expensive than the bottled version -- but I'm generally willing to pay more for (quality) draft than bottled or canned beer.

Just found out the boss at Second Draft is Ms May Chow (the same boss at Little Bao). When I was there I did not recognize her. She was sitting on the other side of the bar, seemed to be entertaining a visiting journalist.

Yup, Little Bao's May Chow has a hand in Second Draft -- as does James Ting of The Ale Project (TAP) in Mongkok. She came over to chat when I was there as she knows the journalist friend I was with... ;)

It is in the news. Owing to a raise on the lease the establishment would fold in February. Despite I have not been there in the past two years owing to city-wide situation, it is still sort of sad to see them go.

I must admit that the main draw of Second Draft for me was the Old Rasputin on tap. Haven't been to that bar in years. Actually, haven't been to any actual bar (or pub) in more than a year! (The pandemic really has changed a number of my habits, including where I go to drink!)