The prime (for me anyway) beach-going month of November :) 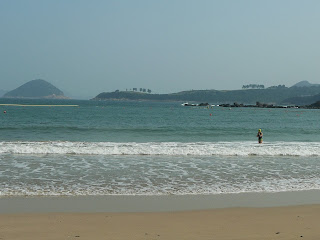 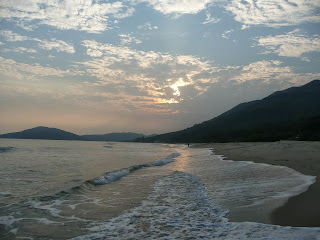 According to conventional thinking, summer is when people are most likely to head to the beach.  But while the hot summer months may be the best time to be at the beach in countries with colder climates like Britain, November is the prime beach weather month in Hong Kong as far as I'm concerned.


Having taken the day off work, I went on an excursion with a friend to Clear Water Bay this afternoon.  Arriving at Clear Water Bay Second Beach straight after a delightful buffet lunch, the two of us lay out our beach blankets in front of a stunning vista and in the shade provided by a life guard tower -- and promptly fell asleep, lulled by the soothing sounds of crashing waves and a lovely breeze.


After waking up from our nap, we strolled around the beach -- and then trekked to the smaller Clear Water Bay First Beach. Finding it less physically attractive than Clear Water Bay Second Beach, we then headed back there and hung out for a bit before finally leaving before sunset.


In the few hours that we were there, the temperature dropped from 29 degrees Celsius to 23 degrees Celsius.  I don't know what the water temperature was as I didn't do any swimming -- but those of us non-swimmers found this afternoon's temperature as well humidity levels to be pretty pleasant indeed.


More than incidentally, I've had another friend of mine ask me, "If you don't swim when you go to the beach, what do you do there?"  The short answer is that I truly like to nap on the beach as well as stroll along it and take photos.  Additionally, in the case of such as Cheung Sha, one of my favorites of Hong Kong's many beaches even while being a tad inconvenient to visit, or the even harder to reach Tai Long Wan in Sai Kung, I like to go to a seaside bar and restaurant and hang out there.

As to the question of which is my favorite beaches in Hong Kong: if it were easier to get to, I'd go most often to Long Ke. But upon factoring in accessibility, I guess my votes would end up going to expansive Cheung Sha, particularly scenic Clear Water Bay, plain pleasant Cheung Chau's Kwun Yam Beach, and the surprisingly nice Stanley Main Beach -- all of which I've found to be wonderfully uncrowded on weekdays, especially in the cooler months like November! :b
Posted by YTSL at 11:40 PM

Gorgeous photos which capture your relaxing day at the beach. I'm sure the weekend would have been more crowded.

BTW, last night on YouTube I watched some videos of Tung Lung Chau Island, an island I wasn't familiar with. I searched your site and, as I expected, you had visited there, in 2008. Those photos of this geologically interesting island are some of your best.

Make that relaxing days -- as the photos were taken at different beaches and days! ;)