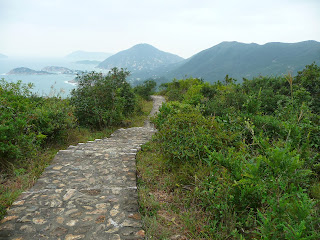 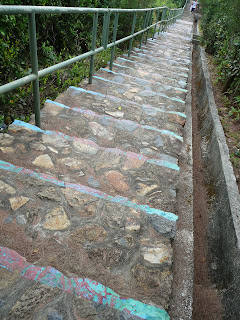 The authorities have built and nicely maintained
a set of 1,000 steps -- some of whose faded layers of paint
(inadvertently) on their edges make for a pleasant sight! :) 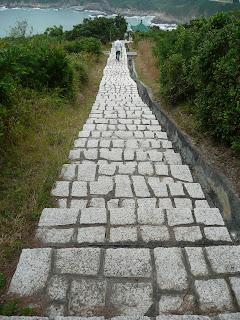 In other sections, there's really nice paving installed that,
again, visually adds to the whole scene to my mind :)

Earlier today, despite Typhoon Standby Signal No. 1 having been raised, two friends and I went hiking along the Dragon's Back and associated sections of trail.  All of us had had gone along Hong Kong Trail Stage 8 -- and, in fact, this would be my fourth hike along the Dragon's Back -- but it's a pleasant enough trail to be worth going on more than once. In addition, there was a section of trail that my two friends had not yet been on and which I wanted to share with them this time around.
More specifically, there's a route down to Big Wave Bay from Pottinger Peak visible from sections of Hong Kong Trail Stage 8 that the first couple of times I hiked on the trail, I thought was part of it. As it turns out, however, the final section of that hiking course is a forest track that one turns on to and goes down before getting to the top section of that other path.
On days when you'd prefer to go along a more shaded route, than one should stick to the Hong Kong Trail Stage 8.  But those who wish to take a more scenic route down to Big Wave Bay should walk a kilometer or so east of the first signpost for Big Wave Bay that one sees and, instead, turn southwards only at the second sign for Big Wave Bay that they'll see.
Upon doing so, one will find oneself along a trail that largely consists of over 1,000 steps leading down to the ancient rock carving at Big Wave Bay and then the beach area.  While going along this trail, it's hard to resist pausing every once in a while to take in the surrounding sights.
Among other sights, there are nearby islands to gaze at, the water that churns up plenty of white foam as it hits the rocky shores in the area, and the manicured greens of Shek O Golf Course. Best of all is the Dragon's Back itself -- and yes, it really does feel very cool to be able to look at that which lies some 10 kilometers away and think "I hiked from there today!" :b
Posted by YTSL at 10:45 PM

HI YTSL -- Agree with you about the paint on the steps! Neat!

Judging by your photos, this alternative route down to Big Wave Bay looks very worthwhile and that includes your link to the Ancient Rock Carving. Were the photos of the steps take with a wide-angle lens,a 28mm?

Correction to my previous entry. Should read, "Taken with".

Correct about the photos of the steps having been taken with wide-angle 28mm lens. Pretty much all of the photos on my blog have beem , acually! :)