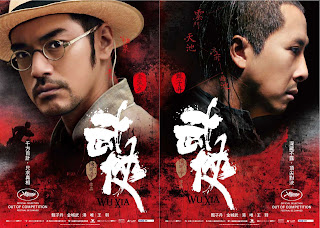 Before the 21st century began, if you asked Hong Kong movie fans who they reckoned was the filmmaker who was Shaw Brothers director Chang Cheh's spiritual successor, chances were high that they'd point to John Woo. In recent years, however, another candidate for the title of Chang Cheh's contemporary equivalent has come to the fore in the initially unlikely shape of Peter Chan Ho Sun -- who back in the 1990s was best known for crowd-pleasing romantic comedies like He's a Woman, She's a Man and critically acclaimed romantic dramas like Comrades, Almost a Love Story.

For just like Chang Cheh moved from writing scripts for cross-dressing comedies like You Were Meant For Me to helming period actioners like The Blood Brothers and The One Armed Swordsman, Peter Chan Ho Sun has morphed into the director of The Warlords (which is a remake of sorts of The Blood Brothers) and now Wu Xia (which pays homage to Chan's favorite Chang Cheh movie, The One Armed Swordsman, by, among other things, giving a prime role to that old Shaw Brothers movie's star, Jimmy Wang Yu).

Way before Jimmy Wang Yu (and another former Shaw Brothers star in the form of Kara Hui Ying Hung) appears in this 2011 martial arts drama, however, it is made clear that the movie's main luminaries are two younger men -- and that it's the interactions between, and stories of, their characters that are the Aubrey Lam scripted film's primary foci.

Set in 1917, the period in China's history when it was a republic but still decades away from being a people's republic, Wu Xia has as its main characters a villager who looks to be leaving a happy life as a husband, father (of two young sons) and paper mill worker (Donnie Yen), and a government detective (Takeshi Kaneshiro) with interesting detecting methods who's called in to investigate how it came to be that the apparently ordinary villager was able to fight off -- and kill -- two hardened criminals who had stopped by in the village and decided to go and rob the general store.

Right from the way that incident gets recalled and shot, the people behind Wu Xia show that they aren't going to go the conventional storytelling as well as filming route. More specifically, we first get shown the fight between Donnie Yen's character and the two bad guys the way that Donnie Yen's character would want to have people view it, then we get shown the fight occurring in the way that Takeshi Kaneshiro's detective character deduced that it actually occurred! (Suffice to say that there are marked differences between the two viewpoints -- but that it really is clever how it also is shown how the fight can be conceivably viewed in these two alternative ways.)

After this bravura section, things not only calm down somewhat but also invariably feel anti-climactic for the most part -- and I'd go so far as to state that the scenes involving Tang Wei generally seem like a drag. Put another way: she who so thoroughly impressed in Ang Lee's Lust, Caution appears badly miscast in the throwaway role of Donnie Yen's character's wife since she is not only quite a bit younger than him but also comes across as being of a different time, from a different place and in a different movie from much of the rest of the people in the film.

Fortunately, the veteran pair of Jimmy Wang Yu and Kara Hui Ying Hung arrive -- though at an admittedly late stage -- to perk things up. In all honesty, I -- who have watched several others of their movies, including those from their younger days -- didn't know until Wu Xia that they could have such incredibly strong, threatening presences. Furthermore, I think it is a real credit to these two thespians that they were able to so very convincingly portray such villainous characters vested with so much fury as the ones they were called upon to essay in this particular cinematic offering!

Still, and probably not too surprisingly, I feel that Takeshi Kaneshiro (who seems to be quite the favorite of Peter Chan -- having appeared in recent years in the director's Perhaps Love as well as The Warlords and Wu Xia) it is who emerges with the major acting honors from this film. Doubtless Donnie Yen may be the main draw for many Hong Kong movie goers these days -- but he impressed with his action directing more than acting in this generally well made work as far as I'm concerned! ;)

Terrific review even by the very high standards you have established for reviews.

The Tang Wei role does seem like a waste--"Donnie Yen's (or anyone's) wife" is the typical Jade Vase role, even if it is updated a bit.

I'm glad you like the review. Have you seen the movie? If not, hope my review makes you interested in viewing it -- Tang Wei's flower vase role notwithstanding! :)

I haven't seen it "Wu Xia" yet but your review moves it higher on the list of movies to get.

Hope you enjoy your viewing of the film when you do view it then! :)

Hi YTSL, Great review, really looking forward to seeing this. I'm a big fan of Takeshi Kaneshiro, he doesn't often get the recognition he deserves.

Hope you'll enjoy the movie when you view it -- and am glad to hear that you're a big fan of Takeshi Kaneshiro too. :)

A little behind in my reading but great review - it is actually playing here in Bangkok but with no English subs. I'll catch it one of these days. Thx.

Good to hear from you! Was just thinking of you and wondering if you're okay since I haven't heard from you in a while.

Re "Wu Xia": Too bad re it not having English subs in Bangkok. I think you'll like it -- so hope that you will catch it one of these days.