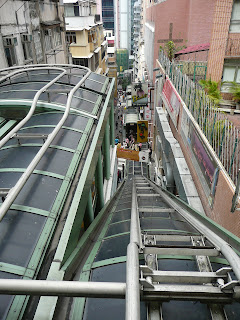 A couple of evenings ago, I had dinner with an American friend who is visiting Hong Kong for the first time. Among the things she told me she had targeted to check out during her maiden trip to the Big Lychee was the Central-Mid-Levels Escalator. This was something that I thought pretty normal -- not least since one of the things I had sought to do when visiting Hong Kong as a tourist was to go and ride along this outdoor escalator system that came into being back in 1993.

Hong Kong film fan(atic) that I am, my reason for wanting to do so was because I had first come to know the existence of the Central-Mid-Levels Escalator by way of catching sight of it in Chungking Express. And since I had first come to know of Alejna's blog by way of her posts on kick ass female movie characters (a number of whom had been essayed by Brigitte Lin Ching-Hsia), I presumed that it was also the case for her.

So imagine my surprise to find that wasn't the case -- not least because she actually hasn't seen that 1994 Wong Kar Wai cinematic gem yet! In view of that discovery, I find myself looking at that Hong Kong landmark in a different light -- and coming to realize that, as with the iconic Star Ferry, the world's longest outdoor escalator system has become a tourist attraction in its own right rather than because of its movie connection.

Still, I have to admit that I can't help but think of Chungking Express whenever I ride on the Central-Mid-Levels Escalator. And this even after I've been on it hundreds, if not thousands, of times now -- including on the way to work and back home after I first moved to Hong Kong (on account of the first place I lived in the Big Lychee having been located in Soho)! ;b

Honestly I didn't even know the Central Escalators existed until I came back to HK 8yrs ago. Nor did I realize its tourist and cinematic significance. To me it was just a cool mode of transportation that took me to all my favourite photographic spots in Central, the old police HQ, the antique market, the mosque, Stanley St. (tho that was more to drool over the classic cameras on display and to buy film ;)

I would be remiss if I didn't mention the fact it the escalator is also a great tool to check out your food options if can't decide what to have. Just take it up to see what's available and head back down once you've decided!

Thanks much for commenting on this previously comment-less blog entry! :)

No question that it's a cool mode of transportation. And you're right that it does that one past and/or near several cool photographic spots!

Also see your point re many food options being near the Central-Mid-Levels escalator... and will add that there are some nice watering holes in the area too. :)

That setting in Chungking Express always makes me nostaligic, and a scene in Fist Power, the fight on the Star Ferry where Vincent Zhao throws the bad guy into the harbor.

The new ferry terminal in Central was very disappointing to me...ah, progress must progress I guess. That weird perfume ad that was there for years...Ted Lapidus?...is etched in my memory though I can't remember the name of the fragrance....

I used to enjoy drinking in Dublin Jack's, under the escalator,and watch the old Chinese guys read their papers.

I agree that the new ferry terminal in Central is disappointing. Fortunately, the Star Ferry ride still can feel atmospheric/(movie) magical -- with my preferred route being between Wan Chai and Tsim Sha Tsui these days.

Re Dublin Jack: It's moved now to Lan Kwai Fong. That red building is now home to a Mexican restaurant. ;b

ooh, as it's time for movie location talk, i feel like i should shamelessly self-promote!

you can see most of the 'chungking express' locations here;

and, what is also quite fun, is some of the shots of shelley street, prior to the installation of the escalators;

Amazing that you have a whole blog devoted to Hong Kong movie locations -- and especially since you don't live in Hong Kong.

everyone needs a hobby, although it would be a much easier task if i was a resident, rather than just an annual visitor...

i love the changing landscape, even if i often think the wrong things are changing, and i still never fail to be surprised when i spot unchanged locations that are thirty years old - which is aeons in hong kong time.

Again, I salute your enthusiasm as well as interest. Here's wishing you happy Hong Kong movie location hunting for a long time to come. :)